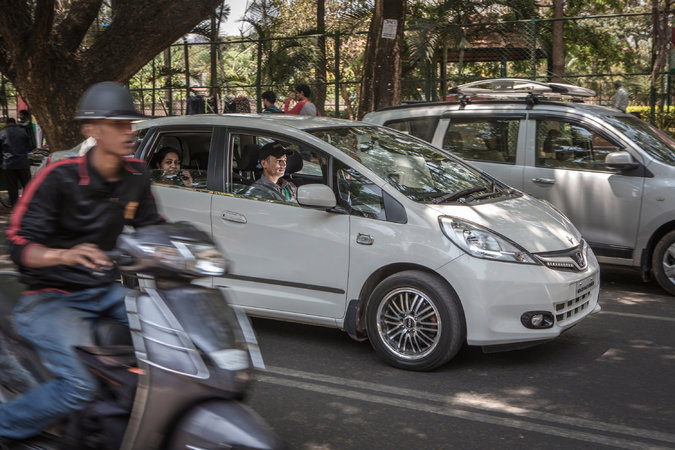 A DriveU chauffeur. DriveU, which provides on-demand drivers for people with cars, gives its best full-time chauffeurs health insurance, something that is nearly unheard-of in India. Credit CJ Clarke for The New York Times

BANGALORE, India — On a hot afternoon in a two-story house here, as dogs barked and auto-rickshaws sputtered outside, a venture capitalist grilled three entrepreneurs.

Their start-up, DriveU, provides on-demand drivers for people with cars, differing from Uber or Olacabs, an Indian variant, which offer on-demand taxi services. The three parried questions about the business in a cramped conference room with doors and shutters painted in DriveU’s company colors — shamrock green.

“What will it take for someone to come in and replicate this?” asked Srikrishna Ramamoorthy, a partner for Unitus Seed, a venture capital fund started out of Seattle that invests in Indian companies. “Couldn’t the Ola guys come in and do this?”

“Essentially they could,” said Ashok Shastry, 25, a co-founder of DriveU, who with his long shorts and spiky hair looked as if he would be more at home in Palo Alto, Calif., than Bangalore. “But it would be taking away from their focus.” The models for Uber and Ola, he said, are built on the premise that customers do not use their own cars.

The venture capitalist persisted. If Uber and Ola were to enter the market, “What would your response be?” he asked.

Amulmeet Chadha, another founder of DriveU, said, “It’s about being a cockroach and surviving.”

That kind of tenacity is what attracted Mr. Ramamoorthy to the DriveU team. And it illustrates that until now the Indian start-up market has been more about great execution than cutting-edge technology.
Continue reading the main story

In Silicon Valley, the general investment thesis for a technology investor tends to be around how strong a company’s underlying technology is and how defensible it will be over time,” Will Poole, Unitus Seed’s co-founder, explained later. “Very rarely does a venture capital investor invest in an operating business that does not have an intellectual property moat.”

In emerging markets like India, however, “you can build very large and profitable businesses on an operating basis without having a fundamental or long-term technological advantage because you are building in greenfield areas with little or no competition,” he said.

Last year was a heady one for venture investing in India; investments rose 61 percent, to $1.9 billion, from $1.2 billion in 2014, according to Venture Intelligence, a Chennai-based company that tracks Indian venture activity. About $95 million of the total represented investments and co-investments in the social impact space by traditional V.C.s and specialist firms like Unitus Seed.