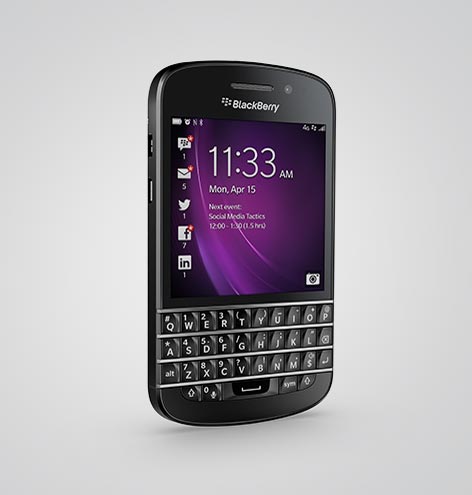 Many of you likely remember when BlackBerry, with much fanfare, announced its BlackBerry 10 phone family back in January. With launches occurring around

the globe, I was able to watch virtually, the launch that occurred in New York City…even Top 40 musician Alicia Keys showed up to the event! We also managed to give away Z10 devices courtesy of BlackBerry for our SMB 150 winners...Harrybbb, and Harry Jr., also review the Z10 here.

With the Z10 touch screen phone first making its way here in the states in March, the company is now taking pre-orders (via AT&T) for its Q10 smartphone, which features a traditional keypad, which many longtime BlackBerry users are likely accustomed to.

According to a blog posted yesterday by CNET, BlackBerry said it will be selling the Q10 for $199.99, with a new two-year service agreement. “Keyboard enthusiasts will love the Q10's terrific physical keyboard, and BlackBerry holdouts will similarly appreciate the upgrades stacked into Blackberry 10 OS,” the blog post reported.

Jeff Kagan, an industry analyst, who has been closely following BlackBerry, and the new 10 series, says that the Q10 should likely do well, since many BlackBerry users love the traditional keyboard device. "I have written several columns and press releases on Blackberry struggles over the last several years, their rebuilding, and their initial launch of the new BB10,” he says. “I wrote about things they are doing right and things they are doing wrong. I have received many messages from Blackberry users. Some agree while others who simply still love their Blackberry really took me to task.”