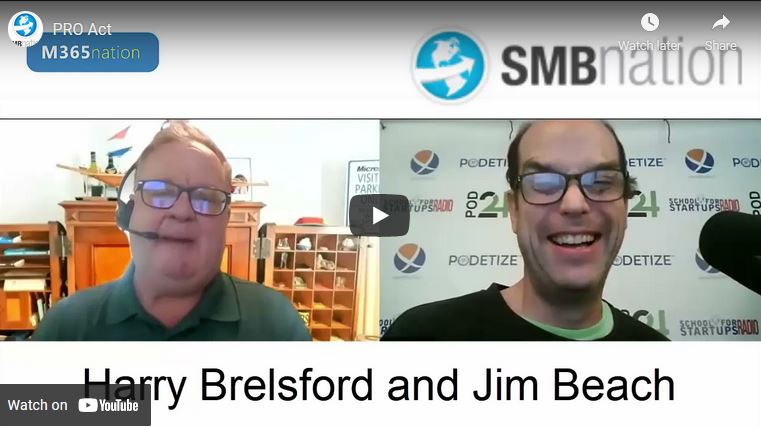 On February 4, 2021, House and Senate Democrats introduced the Protecting the Right to Organize (PRO) Act of 2021.   This is followed by an earlier version of the PRO Act that passed in February of 2020. If this act passed it would be the most significant labor law reform in the United States since the World War II-

era.  If passed this act would drastically change the landscape of employer/union relations as well as gig income or gig workers.  Jim Beach joins us to share his knowledge on the PRO Act and what you should pay attention to.    Watch HERE

Hey Nation Nation, Harry here and Jim, I changed my desktop, my my zoom background. That is a Wootton desk and solid wood and I inherited it. And it's actually in another room, but I'm using this virtual background. But sir, I changed up my act. You knew me? Well, you've known me for a long time. But you knew me in most recent times. I had that sagging white bookcase from the Yes, I've taken a little bit of heat for that one. First of all, how are you doing, Jim, how's how's life, you keep an eye clean.

I am very well looking forward to summer and my turn to get inoculated and just getting back to a more normal life. So yeah, yeah, yeah, amen.

So hey, you suggested in rehearsal, a really good topic about the proact. Because I do want our audience to think beyond the bits and bytes of computing it Jim left to their own devices, all they do is compute, but it's a much bigger world. What's the proact? What's going on?

Well, the easiest way for everyone to think about this is, you remember, about a year ago, California had the option to make gig employees, Uber employees, force Uber to treat them as real full time employees, give them benefits, retirement, health care, all of that. That would be great if you are an Uber driver. But think about it from Ubers perspective, it basically kills their business model. And that's true for a lot of gig economy type companies. And so the Pro Act in California rejected the law overwhelming, more, okay, that it did not pass. And the Biden administration is trying to do it at the federal level now, and I don't want to get into politics at all. All I want to say is, for us, entrepreneurs, people who depend on gig income or gig workers, this is absolutely critical that you follow what's going on, pay attention and maybe get in touch with a congressman. Congresswoman, but pay attention to this. It's not in the news very much. It's, there's so many other things, the $15 work hour, for example, that make the top of the news. And so this is sort of percolating at the bottom underneath the new cycle. And I just wanted to bring it to everyone's attention. If you are a gig worker, or if you employ gig workers, this law could dramatically affect you. So stay on top of it. I am.

Yeah, yeah. And we do both at SMB Nation, you know, despite again, in my world of managed services providers, or msps, they would have you believe that 100% of their revenue is under contract as a monthly recurring revenue source. I have not yet met that person who can honestly say that everybody's got a side hustles. Okay. Yeah. And so this, this would impact them on on that level. And then on the next level would be it SMB Nation, we use gig workers, as you might imagine, if we're doing an event, we just need someone, friend of a friend, Hey, can you help us out for a pop up for six hours outside mask on? It's all that. And that would impact how we could hire and fire people. And quite frankly, the economics because gems drive the past. If we can't have the gig worker, then I got to go to the temp agency, right and get attempt for the six hours for the event. And I'm paying a premium for that. Right? Everybody's got to get a bite of the apple. Right? That's right.

So this is important for the entire entrepreneurship space. And so I just want everyone to keep their eye on it and start talking about it so that it makes it to the top of the news, not the bottom of the news so that we can know what's going on.

Well, and what I believed in, in terms of political awareness, or real world awareness is in the way you started out not not to get political but more, educate yourself, be informed. Make your own decision, I'll, I'll respect that. If you educate yourself and you make an informed decision, may not be my decision. But But Jim, I can respect someone that reads.Educate them.

We go. We're over at school for startupsradio.com. That was plural school for startups radio.com. Shout out to a couple of recent interviews he did. First of all, you're prolific. You remind our audience you have a daily show. Let's start with that. Yes. Yeah. That's real work. You'll have the day. Yeah, that's a that's that's that's real work. Shout out to Bob Berg, a recent recent guest of yours go giver, Bob Byrd. He ran in our SMB Nation crowd and MSP crowd. How's he doing? So, and that's about a decade ago. I mean, I liked Bob. So Bob good.

He's on my show. Every year, he comes out with a new go giver every year. He's doing the whole series now. And so he and his co author John David Mann are both prolific writers and frequent guests. I don't remember exactly what the last go giver was, you know, but there's a whole series now go giver, go giver. And they all basically the same fable type story. And as always, they have the fantastic Bob Berg message of giving back leaning forward. All of the things that he has talked about that have become almost everyone knows it now. You know, he's a, he won, he got his idea to become pretty much the standard. Oh, yeah. Yeah. Known well deserved. All right, my friend. We'll see you next quarter. Just always a pleasure. And hey, maybe you and I can get together live. Maybe not next quarter, but it'll it'll happen soon.

Have a great day. Thanks. Bye.