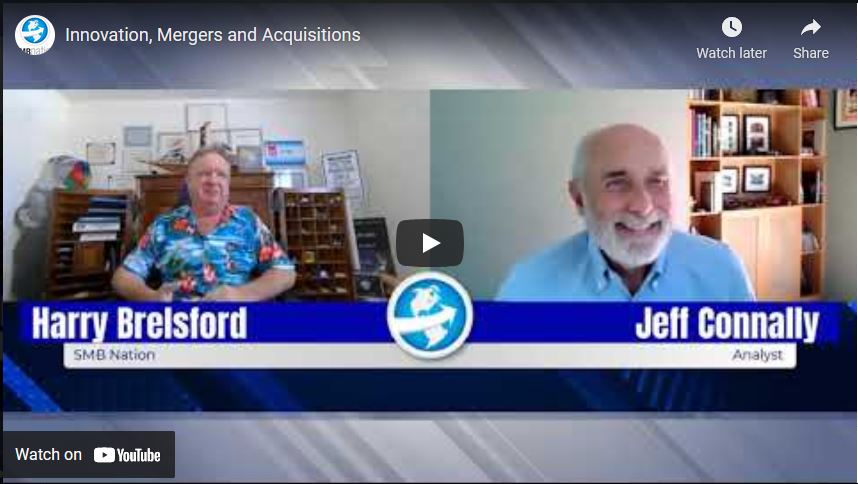 The past year has been a whirlwind of changes not only for organizations and businesses, but for life in general.  With all of the changes that have gone on we have seen organizations mature, build amazing resilience, and come to grips with this new reality that people can actually be more productive from home. With the last year as a testing ground many companies have announced plans for post pandemic work life.

The consensus is that many companies will offer a flexible hybrid models, allowing options for people to work remotely, in the office or a combination of the two.  With this hybrid model still rolling out MSPs have a large opportunity to make sure that telecommunication, software, security and other technologies are up to date and in place to allow workers to continue to be flexible.  Watch as Jeff and Harry chat about the new normal.

A Nation Nation back with  Jeff Connally. Jeff, it's not an understatement to say, I've known you 20 years it's it's somewhere approaching 20. You were early, early SMB Nation. And you were there for the big one 2008 at the Bell Harbor. I was over there was out. Wait, speaking of time and distance and so on, can you believe it was a year ago, literally, not only when the pandemic became a thing, but you and I talked, and I turned it into a blog about the the remote work work from home opportunity. And it's it's because of you that I went ahead and borrowed your insights about it's really a 36 month opportunity. At the time, that was our feeling, not a three month, not a 90 day opportunity. And I concurred that this is bigger than it looks. Jeff, I just got off another interview this morning with Ted Hulsy, probably best known for his involvement in the Htg peer groups. And he said their meeting last week, they're now called connectwise involve peer groups. But last week, two days zoom retreat. And one of the big topics was work from home with remote work. And it was not only technical, but cultural and management styles, and, you know, four or five variables, but it was a huge topic that, guys, you really need to think of this as more permanent. And I thought, I get your feedback. What were your thoughts one year later with remote work?

Yeah, you know, we were talking something bigger than just what we hope to be six months into the pandemic. Yeah, we were way over optimistic then. But, but we were thinking it's going to be several years for everything to get back to normal. And I think while the pandemic has been the triggering event, I think there's many bigger things that you just mentioned, that are really going to drive this, how management has realized, this isn't the theory, you know, the fearful thing, where if you don't see your people, you don't know what's going on? Well, for organizations that don't have good metrics, don't understand what they're expecting of each person. You're right, that might be a problem. However, organizations have matured, there's been amazing resilience among small and medium businesses, even larger organizations are coming to grips with this new reality that people can actually be more productive from home. They need the infrastructure support on the on the technology side, but you also have got to have a really good set of metrics that you're doing. What is it that each person contributes to the overall goals of the company. And once you get that under control, it's not about the pandemic and and working remotely for health safety. It becomes something that gives you great leverage, you can attract talent, just wants to live in Boise, because it's a gorgeous place in the edge. you're headed soon to the Hill Country of Central Texas, because it's beautiful. And who needs an hour long commute? So I think it's it is much more than you and I were theorizing about a year ago. So I think it is here to stay.

Yeah. Recently, one of our other interviews, he introduced me to Roger who is now running CMIT, the franchise organization, you bill, maybe you can answer the question or I need to reach out to him. But you know, based on the the team and you were encouraging them to think about the remote work opportunity, I started to see the messaging on that and the LinkedIn feed from cmit their posts. Are you still in touch with the admin? Are they still embracing this? Very much?

Yeah. You know, always looking for the new thing. And sometimes the new thing is simple things that we know how to do. That's what we've done for a long time. help people connect from afar. And so it's real. And it's it's definitely been a major growth. The company has grown very nicely over the last year. And as different offices have figured out and then shared, how do you handle this in a safe way for our team for the teams that have small business employees and owners that we support? How does that work? And CMIT has done a good job, I think, over the past year growing to that, and I don't see it, ending one debt. So

yeah, yeah, I'll end up this Ted, referring back to Ted Hulsy, the conversations they were having as the hybrid work environment so you know, you may well go to the office one day a week or two days a week, but p key concurs that you know that this is here to stay. The remote work thing is here to stay. And we'll, we'll see what that looks like. All right, my friend. We'll catch you on the flip side. Thanks for pitching in. Thanks,