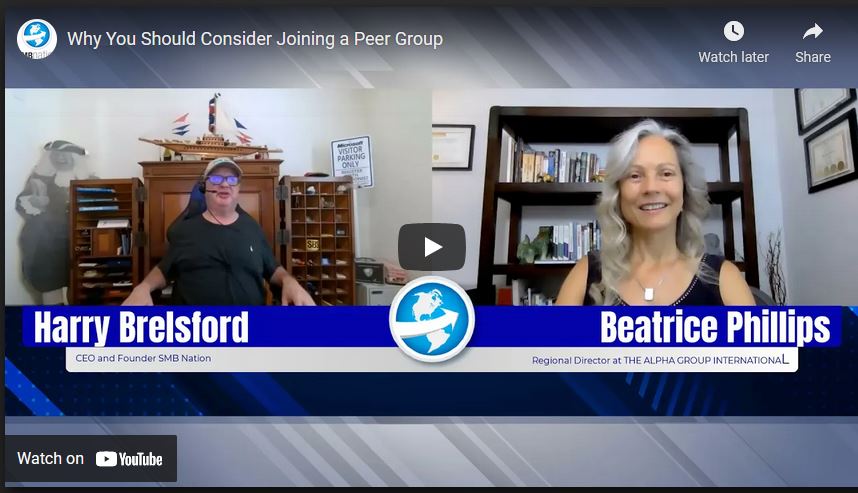 As a business owner and leader you may hear the term peer group tossed around.  But what does it really mean?  A peer group is typically a group of likeminded  CEOs, entrepreneurs or business leaders that, ideally, have linear roles in similar size businesses.  These professionals get together in general working groups to support each other, solve difficult challenges, evaluate opportunities, and develop strategies that help members achieve things that they wouldn't usually achieve on their own.

These groups help business leaders be able to scale their business faster and more effectively than they could have ever hoped to do on their own.    As they say a business can only go where the business owner and or CEO can go.  Watch as Harry and Beatrice chat about peer groups and how they can benefit your practice.

Okay, hey, Well, again, just super proud of you the way that you've been able to pivot consistently, more conversations about that going on as we come into the vaccinated state and the economy appears to have some legs and people are really just the other day had a good personal conversation with someone who really used the pandemic to look in the mirror and she she actually changed careers. So how cool is that?

That's awesome. Yeah, I find that a hole often.

Okay, what's going on with peer groups? Well, peer groups is something a lot of people that I speak to don't even know exist. I mean, people know about networking, you know, referring business to each other. But peer groups are a whole different animal. Peer groups are in general working groups, where you get together, especially with the Alpha Group, you get together a group of non competing industries, and you get them all sitting around the table and supporting each other, where they go, they solve difficult challenges. they evaluate opportunities, they develop strategies, that they usually would not be able, you know, they're achieving things that they wouldn't usually achieve on their own. The best way I could demonstrate or talk about it is, so 10 years ago, actually a little bit longer, I met a owner of a business here in the town where I live, and she owns a sub shop. She's intelligent, very strong woman. And at the time, she had that sub shop for probably 14 13/14 years. And she had that about same amount of employees. And I remember her telling me that she would get up early in the morning, because she would go to the sub shop at 7:30am, to slice onions. Because nobody could do it. Like she could do it. And she said nobody can make a sub as fast I can make us up, and all this stuff. So she had built this business. On her sheer will and strength right now she was in there from early morning, until early evening. And at that time, she was in a strip mall, small parking area that was allotted to them, you know, it was problematic. Anyhow, fast forward. Now, this is 10 years ago. Now, after I started on working with her, we sat down and we looked at a couple of things. And now this came out from her, right. But the thing is, people don't change their beliefs 90% of the people from the time your baby to the time until die, you don't change your mindset, you stay the same way. So versus now she has her own standalone building, she has 26 employees, and you barely see her in the shop anymore. And she achieved that in about five years. And quite honestly, if I would have had the Alpha Group at that time, the structure that we have and systems, she could have done that in probably half the time two years. Yeah. And you know, and that's the power of, I'm having, well, a peer to peer board because her and I were sitting together and she's talking to other people, but it took that I'm having other people that are at her level, talk to her. And you know, and this is where the peer board comes, you get like 20 people in the room. And these are all experienced people, they're driven. They want to focus on their business, right? And the business can only go where the business owner or the CEO can go. And if you're putting out if they're putting out the same fire over and over again. They're not working smarter. They're just working harder, right? Yeah.

Yeah, exactly. Exactly. No, no one in you know, no, no one better than yourself to kind of coach that type of individual along and I'm wondering if that experience that you had was the baseline, you know, you were educating yourself on how to be a coach and a mentor. So you were getting experience. So that's pretty cool, right? Look where it led.

Right? I mean, now you I had my own business, which was a wellness business. And a yoga studio, I started two other businesses on the side, but I was also helping other people start their business. And like one thing, for instance, just an example, when I had the yoga studio, I went to a wellness conference, which had, you know, people from different industries like the Pilates people in the gym owners, but all the wellness industry. And what you get is the all in the same bubble, right? So when you have one gym or one yoga studio that has really good marketing strategy, everyone copies it, and everyone does the same thing. Yeah. And, and so you know, you're in the bubble. But when you are in a peer group and a peer advisory group, you brain, you already have all the resources, you're the expert in your business, you know, what you need to do you just need someone from the outside go, Hey, have you considered this? Have you considered that? And there's mutual respect, because they all are in, you know, they're all in the same boots in a different way. Don't have to say, you don't have to go it alone, right?

Yeah, yeah, no, exactly. And with the new startup, I'm involved, it's starting to get some legs. I I'm, I'm not going alone. This time. you'll, you'll recall, basically, I built SMB Nation as a sole proprietor and then added employees in a new startup, which is for another day to discuss, but, you know, we're in talks with a gentleman whose career I mean, a real management consultant, you know, bit big time, and I need to go faster. And I need to team up with someone this round. And I'm so I'm excited. You know, the downside of that can be you do give up some equity. But would you rather have half of a huge pie or a small little pie? 100%. So I think I'm going to go with the teaming approach this time.

Okay. All right. Well, you notice the thing talking about SMB Nation, and you building it yourself and scaling it most of the time. And I remember, you know, I remember those days go Yeah. And it's like, you got to get the right people in the right seat in the bus. Right. So and a lot of times you find people say, Oh, I can't hire the right people, I can't retain good people I know are they're losing major customers, and they don't know why. And the thing is, you need to have the right metrics, you need to have the right system and the right team. And you as the owner are the most important part. And there's a great book, it's called Hmm, it's on the page. It's, it's by Trey Taylor, it says, see, oh, there's only three things, right. And that's basically hire the right people, make sure there's money in the bank, and keep the vision of the business growing. And the thing is, when you're a member of the Alpha Group within a couple of years, you know, you or a peer group in general, you get the tools like what you're doing now, you're not going it alone anymore, but you should be able to go home at 430 and call it a day and have the beacons yourself to go skiing, waterskiing, snow skiing,

or my case more of the biking thing these days, but oh no good for you. Well, hey, we're at time. So thank you very much. We'll talk to you next month. And thanks for being one of our panelists.