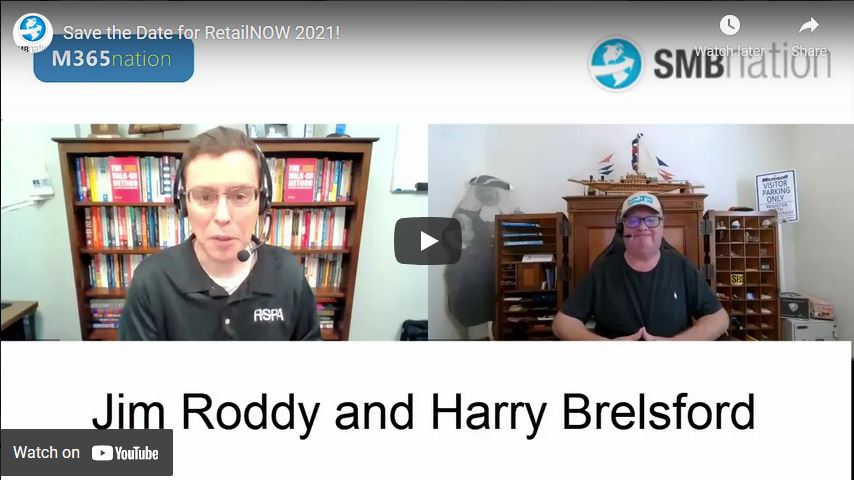 The retail IT channel’s #1 trade show, education conference, and networking event is back – bigger and better than ever! RetailNOW is taking place in person July 25 to 27th at the Gaylord in Nashville TN.  Don’t miss out on this industry wide event gathering  VARs, MSPs software developers, hardware vendors, and distributors linked in the retail technology space for a three day

conference.  Watch and learn more as Jim shares the ins and outs and why you need to be at this event.

Harry, always great to talk with you. Thanks for having me.

All right. All right. And you've helped us grow the the 420MSP practice. Thank you. That's, it's got legs. It's got legs. That's pretty exciting. But you have a conference coming up. And I'll tell you, you I on Facebook, my middle name is risk forward, which is an investor term, instead of investing backwards, but I thought I was risk forward, you're really a risk for where you guys committed to a July date some time ago for your multi day retail now annual conference. And it looks like it worked. Talk to me, give me some context and wants to talk about what is the show but the timing? You pulled it off, dude.

Sure,yeah, that's gonna say the vaccination plan seemed to really work out for us that things started rolling out early part of the year. So the show was called retail now, it's an annual convention put an asterisk by annual because nothing happened in 2020. But it's a gathering of VARs, MSPs software developers, hardware vendors, distributors, all in the retail technology space. When we say retail, we talk about restaurants, retail, we talk about grocery convenience store and the cannabis vertical. So we draw close to 2000 attendees every year, about 160 exhibitors. So it's a good sized show. And it's all channel focus, right? Like you've got to be playing in the channel in order to do it. And so, you know, there's all sorts of stuff that I could get into for the show. But the one thing that we're saying is, it's in Nashville this year, it's in person, you actually get to see people in three dimensional format, which is something we haven't been able to do in quite some time. And so we're also you know, because people are nervous, like, hey, you're going to be able to pull off a show like it's going to be the first industry wide show in almost two years. And what we've been able to see is our registrations as of this recording today are trending ahead of all our past years that we've had, whether the shows in Nashville, Vegas, Orlando, anything like that. So interest is is really high and we think that it's going to be a coming out party for the retail it channel.

Yeah, I've had to revise my forecast about events based on I mean, hope, you know, hopefully, with my analyst hat on I'm doing revisions. I you know, if I make a forecast, I don't have to stick with it. I'm just doing the best I can. Right. But you and I have talked, I really thought it would be q4 and I I just I I didn't know. I didn't know if you're able to pull it off in q3 and you are i the only thing I would say is I kind of wish it wasn't q4 because the humidity levels would be down in Nashville.

The good thing is it's at a Gaylord property. So you know, those are that's like its own bio system, eco system kind of thing. So you can go into the Gaylord, again, the show runs like Sunday through Tuesday. You can come in early, hairy Saturday, hang out at the waterpark that can be your time outside, and then spend next three days and climate controlled.

Yeah. And one more time on those dates. I'm on my calendar

July 25 through 27th. Again, it's retail now at the Gaylord Opryland in Nashville.

Yeah, cool. And it looks like a my calendar, you're not colliding with any industry events. So that's cool, because sometimes there are collisions, in the past CompTIA has kind of been in that window, usually late July or early August, typically at places that are very hot and humid. What's up with that, man, stop that. It's

just seen before I joined, I saw I've been a volunteer with the rspa for you know, decade and a half. But I joined full time, a couple years ago as a business coach and the VP of Marketing. When I was at Business Solutions magazine, we would talk to the artists pan CompTIA and say, can you please not schedule it on the same week? And if you do that, can you at least be in the same timezone? Right? Because somebody would be in Vegas, someone else would be in Florida, you'd have to kind of cut your team in half. So yeah, it'd be great if we're able to coordinate that, but as you know, from scheduling events, you know, you got to find the right facility and, and all sorts of other things, all sort of competing interests. But yeah, we're in a, in a good spot, being in late July, again, from a, you know, vaccination standpoint, from a folks willingness to travel stamp. But we've that's the other thing. Like, you know, we didn't just like close our eyes and jump into this and say like, you know, Ready or not, here we come which I call the you know, the hide and go seek method. We were asking our vendors, we're asking our resellers, you're asking our software developers, how do you feel about traveling, and so we had a lot of people who were Yes. And a lot of people who were maybe and then maybe was if I can get my vaccine and the way those rollouts have been going, they're super, again, high enthusiasm, folks ready to get back, get back, get back at it, and they could do with confidence. The other thing is, I want to say is we're going to make sure it's a safe environment as well, right, where it's part of the Marriott system, the way we understand it, Master still going to be mandatory. for that. We're going to enforce social distancing. There's going to be you know, pay sanitizer stations all over the place, the way food is going to be distributed is going to be different as well. We actually have a tab on the retail that website just dedicated to safety. And we're giving all sorts of regular safety spotlight updates, we have a long list of things that we're going to do. So it's going to be a little different from what a typical tradeshow is, but it's still going to be way way better than no offense, a zoom meeting where we're just looking at each other screen to screen.

Yeah, yeah, well, not only will I be there, I'm participating on one of the panels in the cannabis technology area. I'm inoculated The only side effect from Pfizer number two is that made my arms really long. Look at that. That's the only the only side effect I took up swimming again, man is great.

You gotta you gotta be careful, somebody is gonna grab that screen grab and send it out and think that you're serious about like, Oh my gosh, gigantism is a side effect. So

there we go. All right, my friend. We'll talk to you soon.

Always a pleasure, Harry. Thanks.