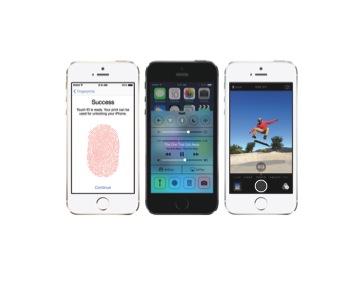 As I sit here and write this blog, I feel as though I have been here before with iPhone, for some reason. Wait…I

actually was in this same spot last year, when Apple introduced its iPhone 5, and its new operating system. At the time, I was using “an about to crap out iPhone 4,” which was on its last legs, and I was thinking of either downloading the new OS or just giving in and getting the 5.

Since crowds and waiting in line are not my thing, I figured I would wait until after the holiday rush, and get the iPhone 5, especially since my upgrade would kick in. I also was annoyed that I didn’t have enough space on my iPhone 4 to download the new OS, so the decision was kind of made for me anyway.

Now, fast-forward to about one year later, and Apple has done it again—they have introduced the new iOS7, as well as the iPhone 5s and iPhone 5c. I was excited to upgrade to my iPhone 5 this past spring, but now I feel I am here once again, one year later in the same spot. I’m on the fence about either upgrading to the iPhone 5s (even though I just invested in a new phone a few months ago), or downloading the operating system.

Once again, the decision was made for me, when my iPhone 5 (with even more storage than the 4) told me that there’s not enough space to download the new OS! So now my question is, do I just bite the bullet and upgrade my iPhone 5…complete with its cracked screen, which appeared about my 14-month old son decided to throw it across the room one afternoon!

On the topic of “to upgrade, purchase or not,” tech analyst Jeff Kagan offers his comments and thoughts discussing early adoption and specific needs of the consumer. “Apple introduces a new iPhone every year. And every year the same question comes up. Should I upgrade as soon as it hit’s the streets, or should I wait? The answer is simple. It depends on who you are and what you want,” Kagan says.

“If you really want the new iPhone or iOS 7, and if you are an early adopter, and if you don’t mind some hiccups and problems that come from being first, then go ahead and jump right in and be among the first,” Kagan adds.“However it you would prefer your iPhone to work right, and don’t want to put up with early adopter problems and hiccups which always occur, then I would wait a few months.”

I guess my decision will depend on what is most important…right now, I think if the screen wasn’t cracked on my phone, and I had more GB, I would just download the app and move on—especially since my phone is only about 5 months old…I see I have a partial upgrade ready to active in a couple months, so maybe I will take advantage???