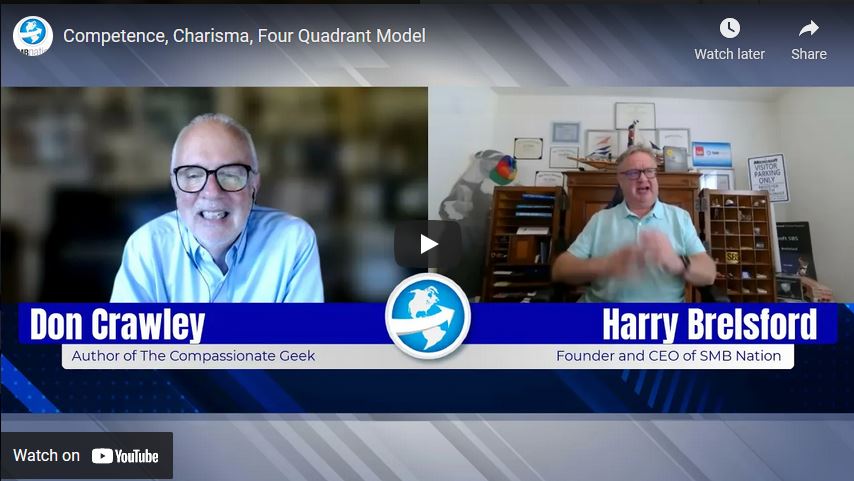 Building a  successful IT team is a hard task, and although many of us look for technical skills relationship building skills are just as important  . For success in a career in IT, there are  two separate and distinct skill sets are required. First you must have top notch technical skills, but you must also have the ability to work with people.  Don Crawley joins us to chat about how we  can divide people into one of four quadrants on a four-quadrant model:

Watch as Don takes us through the four-quadrant model.

Hey Nation Nation, Harry here with one of our regular analysts Don Crawley out of Seattle, the Compassionate geek How you doing?

Great and compassionate. Hary, how are you?

Good. Yeah, yeah, just chugging along. So hey, you brought up a really good topic for this month. Competence, charisma, four quadrant model, let's jump right into it, what's going on?

Sure. So I got to thinking about how there there are really two separate and distinct groups of IT people there are people who are leading satisfying, rewarding fulfilling lives and careers. And then there are people who are struggling and and so the the ideas of compassionate geek and the five principles all came out of that. But we can divide the the five principles into really two broad categories. And we've talked about the five principles in the past the principles of competence, compassion, empathy, being a good listener, and treating people with dignity and respect. And you can divide those into two broad categories. First of all, you have competence. That's the technical competence. That's your ability to perform the task of your job, whether you're configuring a server, a router, firewall, building, cloud apps, whatever it is, that's, that's your ability to perform the technical aspects of your job. And your charisma, we're going to define as your ability to understand get along with an influence people. And the most successful it people exhibit both competence, and charisma. And I actually am going to share a screen now, and we'll talk about the differences between each of the two categories. So let's start by taking a look at the actual model. And here it is, you can see it. And in the lower left quadrant, we have the aspects of people who have no competence and no charisma. And these, these are people who have given up on themselves, they're not interested in self improvement, they blame everybody else for their problems. Television character that kind of comes to mind is Michael Scott in the office, you know, they just they're not really interested in in making a contribution to society or improving themselves and, and you don't want to be in this quadrant, or you want to avoid being in this quadrant. Now, the next quadrant over is the charisma but no competence quadrant. And in this in this quadrant, we have people who are great fun to be around, they've got lots of charisma, but they don't contribute anything to society to the relationship. I think of the people from college who are a lot of fun to party with, but they'd never show up for class. And yeah, and taken to an extreme. These are con artists. And again, you don't want to be in the lower right quadrant. Now if we go to the upper left quadrant, we're gonna see some people who are very familiar to those of us in it. These are people who have high levels of competence, but no charisma. And the first person that comes to my mind is the fictional character Sheldon Cooper from Big Bang Theory, right? He has one other character has two PhDs but doesn't understand why people are always saying creating. And and if you look in sports, this is the the athlete who performs brilliantly on the baseball diamond, or the basketball court or the gridiron. But when the game is over, they get in trouble with the law for antisocial behavior, or this is that brilliant coder that we all try to avoid dealing with because they produce beautiful code, but they're so difficult to deal with it. Nobody wants to have anything to do with them.

Well, yeah, I'll add an example of what I've seen. Just as a lay person observing the healthcare sector in this is a true story. I'm a gentleman who I will not name but you know, number one at Yale, right? I mean, the brilliant doctor old school, our generation brilliant doctor, and he was recently but he's so brilliant and does great work in the ER in Seattle, and so on. But there was something about his charisma. Well, a couple years ago, he got diagnosed as being slightly Autistic with Asperger syndrome. And that explained it, right. I'm like, No, you're you're so freakin smart. Go on.

Well, so that's an interesting point. Because as I was developing these, I talked to one of my consultants who, George Harris, who's a PhD psychologist, I said, I'm telling people that that most people can learn people skills, is that true? And he said, Yes, with the exception of people who have great difficulty recognizing emotions and other people, which is part of what you were just talking about. But most of us can actually work on this and we can improve it but you first have to be aware of it. And then you have To be intentional about making different choices in your interactions with people. And that's really what the the competence charisma four quadrant model is about. It's, it's identifying where you have issues in your career and in your interpersonal relationships, and then saying, okay, I want to work on them. But you know, this is a classic example, a doctor has great skills but lousy bedside manner or Yeah. Yeah, right, exactly. I worked in radio broadcasting for many years. And we had a chief engineer, one of our stations, who was brilliant, the guy could tune an antenna system, he knew audio, he knew RF, but he was so gruff and disagreeable, even at bad personal hygiene, that we finally had to fire him and replace him with somebody who was technically competent, able to do the job. But also we were able to get along with. And the interesting thing on this, Harry is that the people who are in this quadrant often overestimate their value to the organization. And they underestimate the impact of their bad behavior on other people, or they're not even aware of it. And and, and so the warning sign is if you start believing that they need you, and they can't function without you, that's, that's a warning sign that maybe you're in the upper left quadrant, where you have a high level of competence, you're really good at what you do. But you you just you don't understand people, you don't know how to get along with them, and you don't seem to be able to influence them. And that leads us to the upper right quadrant, which is where you find the leaders of society and I think of people like Richard Branson, for example. Or Mary Barra, the the CEO of General Motors. In fact, she's a great example, because she came up through the ranks as an automotive engineer, she has a background in engineering. And now she is leading General Motors into the 21st, ultimately into the 22nd century, by her ability to understand get along with an influence people. And that's really the key is you want to strive to be in the upper right quadrant where you you are working on your people skills, and you're working on your technical skills, and you are working to master both of them at the same time. And here's how you use this model and thinking about it, you first of all, think about where you are right now. And it doesn't matter where you are, I mean, let's just say for the sake of discussion, that you're somewhere above and to the right of the center. So you're in that competence and charisma quadrant, but you're not really high up. So then you ask yourself, okay, what am I doing today? And every day to improve my people skills? Am I reading books on interpersonal communication and relationships? And my technical skills, am I maintaining my certifications and renewing my certifications and, and going to conferences and so on. And that's how I use the model, but, but the danger for us and it is getting stuck in that upper left quadrant where we have a high level of competence and and we don't have good interpersonal communication skills, and we want to try to move into the upper right quadrant. So I hope that's helpful.

No, it is I the executives I've seen who get to the top Yeah, it typically this just my own experience. I mean, let's let's assume they have a core competency take the oil industry, sir, of course knew who worked in the oil services field or whatever they know the oil industry. But to you know, the people who really become leaders are really dig a little bit deeper into the charisma the higher you get, right? Because you're gonna have engineers, petroleum engineers, reporting up the ranks and will do the work even though you were one but my dad always phrased it is you know, to be an executive you want to hate Pete called it a philosophy said, you know, these people that run Exxon and Chevron, they have a personal philosophy, right about society and a lie often in helping, you know, and when you meet these leaders, they're quite good. I mean, they'll be very diplomatic, let me tell you,

the very successful ones, the long term successful ones are, there's some some short term flesh in the pot CEOs, but they don't have staying power and, and I wish I could think of his name but the guy who is the CEO, the current CEO at Best Buy, is is he's doing amazing work. And he credits the people he says it's all about the people. And and I feel bad that I can't remember his name, but but he talks about that, that it's the ability to, to achieve goals to the efforts of the people that work for you and to celebrate and respect those people. And that's the difference between the people who are hugely successful and the people who are maybe moderately successful, but will never get into that upper right quadrant. And the other thing is that, that I think, again, we often overestimate our value as far as technology and underestimate the impact of bad behavior on the people around us and on our career.

All right, my friend, we're gonna make that the final word. I got a bounce. All right, time. Thanks.