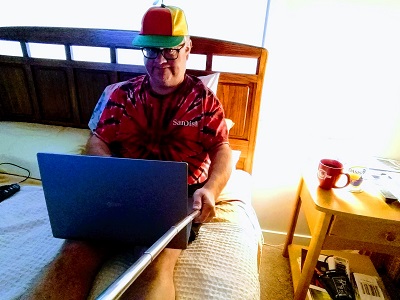 I’m living and breathing the remote work lifestyle (and liking it) with a new family member – the LG Gram laptop. This is the first of a couple blogs where I will share my experiences with this device.

When the shipping box arrived – I was stunned by how light it was. When I opened the box and lifted the LG Gram out – it felt like it weighed a gram. I proceeded to power up and complete the Microsoft Windows 10 OEM SKU installation without incident. But because it had been awhile since I have brought a new machine online, there were a couple changes in the Microsoft Windows 10 set-up routine. For example – there is a two-factor authentication step to verify your identity. And the PIN is now eight digits instead of four so I had to think of a new one.

First thoughts on the LG Gram.

I’ve made this a machine in production as it’s 17” screen allows for real productivity! I’m writing my 23rd book this summer that will publish Labor Day Weekend and I’m using the LG Gram – often in my bed first thing in the morning. That’s a significant point because that laptop doesn’t OVERHEAT and remain cool as I have it propped on my legs as seen in Figure 1 below.

Figure 1: I’m staying safe and sheltering in place this Spring with the LG Gram.

A couple other quick hitters include the awake speed. A simple tap of the power button results in instant on – much faster that my older now retired laptop. I like the logon via my fingerprint – BIOMETRICS baby. I had to really tone down the touch pad as I have lazy hands that would inadvertently touch the touch pad and move my mouse cursor to a different location while I was unaware and typing my book in Microsoft Word, resulting in a CTRL-Z to undo mistaken typing.  That’s on me for having big lazy paws.

I’ll be back in a month or so with updates on how my love life with the LG Gram is going.