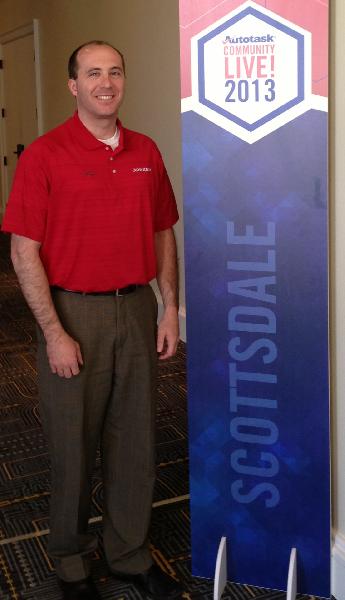 It is always a validation when a technology solution spawns a cottage industry of new jobs surrounding it. For example – a lifetime

ago, the first release of Visual Basic resulted in employment advertisements in the Sunday paper for VB programmers! Myself and the VB team at Microsoft were dazed and amazed. Such is the case with Autotask, a PSA solution for MSPs. The company is holding this week its 5th annual conference, for Autotask Live users, at the Princess Fairmont in Scottsdale, AZ, and reporting more than 600 attendees.

Tom Osborn, Vice President of Client Services ( pictured), spoke with me about his success in launching the Certified Consulting Partners program. In just a year since its launch at the last Autotask Live event in Orlando, the program now has 33 certified consultants worldwide of which 15 are attending this event. Each was sporting dashing logo wear that identified themselves as holding the Certified Consulting Partner title. They wore it well!

Ironically, I had lunch with a leading MSP business coach, Steven Alexander (MSP-Ignite) who is one of the Certified Consulting Partners in the audience. He spoke about the synergy he enjoys. The business coaching drives Autotask consulting engagements and vice-versa. He was a speaker on a reporting feature the hour prior and was exhibiting the classic “Finder” role for earning new accounts: speaking at conferences. I took from lunch that his professional services are balanced: he’s not just an MSP business coach and he’s not just an Autotask consultant.

So what’s wrong with this picture? Nothing…yet. Currently, Autotask is motivated to have as many Certified Consulting Partners as possible. If it refers a “customer” to a consultant, it has a 20/80 split (the consultant makes 80 percent of the revenues and pays Autotask a 20 percent finder fee). But there is an inherent conflict coming down the road. It is this: Autotask competing against its consultant. Today consultants account for 10 to 15 percent of the on-boarding work.

Autotask hopes it’ll exceed 25 percent this year. BUT! But Autotask has its own on-boarding consulting division to charge for assisting with implementations. I want to say I smell ORACLE here but it’s likely not going to be that bad. Also, Autotask is run by very nice people; Oracle is not. And Autotask doesn’t claim to have all the answers. I know its culture is that it’s open and receptive to feedback. That’ll likely mitigate the forthcoming channel conflict it is inevitably creating in the consulting game. Ask me in five years how it all worked out.