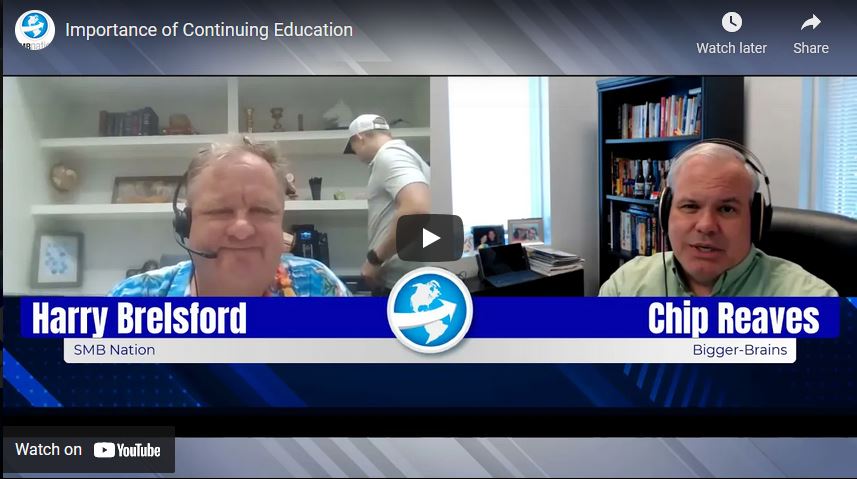 Industries are constantly changing, and staying current with the latest developments, skills, and new technologies required can be hard.  With our world changing at what feels like light speed it is more important than ever to stay abreast of these changes so you do not lag behind.

Continuously improving your skills is the one surefire way to stay ahead of the competition and advance your career.  We meet with Chip Reaves of Bigger Brains who shares with us the importance of building your knowledge and the power of online training courses.

Hey Nation Nation Harry here and a busy Event Center some folks in the background but let's not let that stop our chit chat with Chip Reeves with the Bigger Brains and also well known with the the world of Computer troubleshooters. So we've intersected in a couple of different ways over the years. That's true. So first of all, how are you doing?

It's been a while. Doing good, doing really good. You know, it's, I hate to say it, but, you know, the, the pandemic was good for us in a way. I mean, if the if the world has to go to online training, then online training is a good business to be in. So while there's been a lot of ups and downs, and definitely a lot of downs, the last year has been really good for business. We've tripled in size, we bought a new building, we've added staff, it's, yeah, it's been a good time.

Yeah. And let's talk about that. That's the reason I reached out to you as you made a little bit of noise about moving into a new facility. So first of all, tell me about that the production studio, what's what's going on there?

Well, yeah, so when I first got into this business, which, you know, you know, I was in the IT service, slash MSP sector for 30 years. When we first started developing our own content, we decided to go with a very video based format, which has the advantage of being really engaging people like it a lot more than, you know, say PowerPoint narrated slides. And that's a gap. I agree. But it's also a lot more intense to produce, right? So you got to have a studio, you got to have equipment. In our case, we decided to split the film with multiple cameras, multiple people on set and everything. So it's a much more challenging format. And as a result, that also means it's a lot slower for us to produce courses. So over the years, we've evolved, our first studio was in my house, our second video was in the back of my msps office. And I sold my MSP in 2018, the last one that I had. So now we've actually bought a building and customized it into a custom built studios, we have two production studios, we have five video editors working out in the bullpen area. And the hope is, is going to let us produce a lot more courses a lot more quickly in the future.

Yeah. And so going back to SMB Nation, what kind of curriculum offerings do you have? That might be interesting to the audience? You and I both know?

Sure. Well, you know, so actually, when we got started, and we launched it, SMB Nation 2012 Yep, our original catalog was a little bit of a shotgun, it was some Microsoft Office courses, and then a little bit of sales and marketing and some business skills. And pretty quickly, the market kind of led us towards focusing a lot on the Microsoft space. So we have a very deep curriculum in Microsoft 365, Office 365, Office 2019, soon, Office 2021. And all of that side of things, but very end user focus. So and I want to be clear on that, because a lot of people think that this is, you know, given my background, this is training for IT professionals. And it's not that it's training for IT professionals to offer to their clients. Whether it's as a, you know, separate revenue making piece or more often is something you can bundle into a service plan kind of thing. So that's definitely our strong suit. We went a lot of awards for our Microsoft content, e learning magazines, named as best IT skills training for the six or seven years in a row now. But we've also been broadening the rest of the catalog, too. So we do have a pretty strong sexual harassment training portfolio. For example, HIPAA training, QuickBooks training, a little bit of Adobe and Google a little bit of sales and marketing, a little bit of business communication, time management, cybersecurity, you know, a lot of the things that businesses are looking for nowadays.

Yep. Well, I'll tell you what, let's do this. Let's check in next quarter. And maybe you can walk us through some of the screens, I just wanted to do a quick hitter in and get you back on our radar screen. So what we can do next quarter is actually walk through some of the courses that you have available, and, you know, look at them on screen kind of thing. And you tell me, you know, the basic structure of the curriculum, the length of the course the you know, the teaching methodology, I'm assuming, or hopefully you still weave humor into the fabric of your offerings. I remember the Windows XP Migration video was pretty funny.

Oh, that's right. Yeah, that was pretty popular with the SMB Nation, folks, especially. Yeah, we tried to that the weird thing about you know, as we've been kind of sucked into more corporate training, a lot of corporate buyers don't have a sense of humor, and there's certain jokes that we couldn't get away with in that market. We've actually had to edit a few out, but but overall, I mean, our goal is you want to make training. It's interesting. You know, a lot of people have to take training because it's required by their job, but you know, they're, they're migrating to Office 365. And they need to learn how to use Microsoft Teams, the company's making them do it. And you know, there's a difference between training you're forced to take in training you enjoy taking, yeah, we're always focused on making errors enjoyable, and humor is definitely always a part of that.

All right, Chip. Bigger brains, folks, look them up. Thanks, Chip. Have a great day. Thanks.