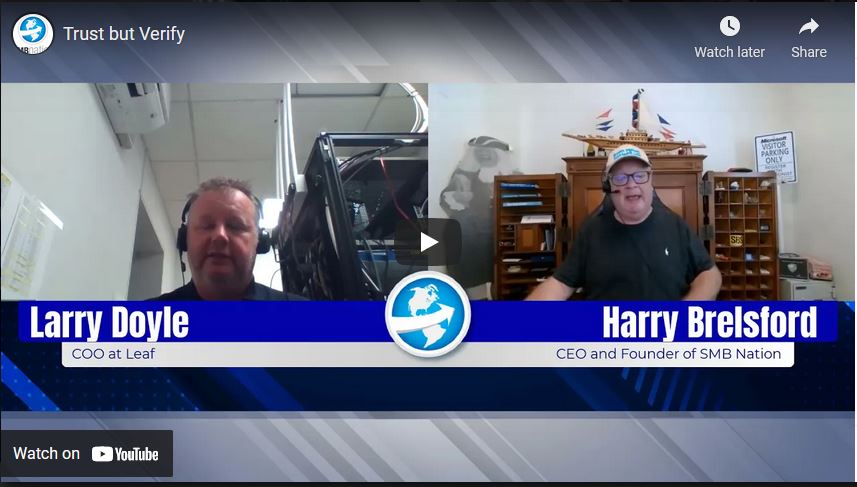 Delegation is one of the hardest management tools for a leader to learn. As MSPs we like to be thought of as “Trusted Advisors” to our clients, not only to build a reputation for ourselves, but to also serve our clients the best we can.  Larry Doyle joins us to share some situations he has come across in the last year where he is taking over clients, and they are saying they paid for or

already have this or that, and come to find out they have none of it.  Join us as Larry shares his Trust but Verify mantra and what he has run across in the last year.

All right, how you doing?

Very good. So yeah, you brought up an interesting topic for this session on trust, but verify. So the small business, are they getting what they're paying for Go, man?

I thought it's just something I've been thinking about. Recently, like, we've always talked about the trusted advisor from the early days of the Microsoft's and the green take, and all that kind of stuff. Like, yeah. And, and, and that's fine. Like, you know, everybody's working in the industry and build up a reputation. And, but it's just, I'm coming across situations lately. In the last year, like, where I'm taking over clients, and they're kind of going, Oh, we have this and we have that, and I'm gonna go on, No, you don't. And they go, Well, we paid first, like, well, that's different to have it. And it's hard on smaller companies that don't have the in house expertise, IT expertise to go, you know, Alright, we're getting a server, , we've ordered this. And as suppose we've been told it's going to have 256 gigs of RAM, and it turns up, and it's only got 128. Yeah, but 128 is enough to get everything going. And they don't know any different because they don't know, they don't know what RAM is so. And it's just that kind of thing that slippage, maybe on the part of the provider, you know, they mean, or in 256, it wasn't in stock it you know, it didn't turn up. They didn't they didn't have to pay verse, and then somebody forgot about that, yeah, I'm just using that as an example like, and then some of it could be malicious as well, like so.

Well, that's it, you know, you probably have both, you probably have negligence, on the one hand, or a mistake, you know, that the legitimate mistake happens. But then you might also have a switcheroo going on, like, maybe, you know, they're selling the the high end server with a lot of RAM, and then they're taken out some of the ram for their own use, and, you know, happens. So, so, have you seen this more than once? It sounds like you, you bumped in?

Yeah, I'm coming across it more, more and more frequently, like are, you know, taking over a site from somebody else like, and, you know, we're kind of going, Well, you know, they might have bought something a software was like, and it just never got installed? Are they bought a firewall? And none of the AV services were turned on for the last two years? Yeah. So it's, it's a combination of incompetence and laziness, I think, in some land, and some of it is just, you know, maliciousness like are not malicious, but it's just them gone. Like, we've sold them this, like we, you know, and don't know, what are we installing it or not like, so we won't bother. But I suppose where I'm coming from is, you know, how does the small business owner verify that he's getting what he wants? Like, do you go ahead and get a third party to audit this? You know, I think this could be my, my next business in 10 years time when I go to retire.

Yeah, yeah, no, no, exactly. an auditor?

Yeah, for projects, like it's fine for the bigger companies that already have in house expertise. They're probably specking what they want them they know exactly what they want. And they may even be doing the install themselves. So they're not they're not the problem. Yeah.

No, I concur. It's, it's a tricky one. I wonder if you would use you know, one of these sniffers, our good friends over to Atera have the, you know, the network discovery tool, and it can go around and kind of lay it all out for you. Is that what you're thinking that you'd use automation to do an audit?

Yeah. No good topic. Yeah. I don't necessarily have the answer to that behavior. You know, but it's good that we're surfacing it so looks like true to form sir. You're in a server room or what's Where are you What's going on?

Yeah, I have actually had the server man school actually doing this This thing here, it's the sofa says C drive that they sent out to me. So I'm just seeding a very large file server to go off to the storage craft. Dr. Yeah.

Yeah. Cool, man. All right. Well Hang in there. We'll talk to you next time. Thanks, Larry