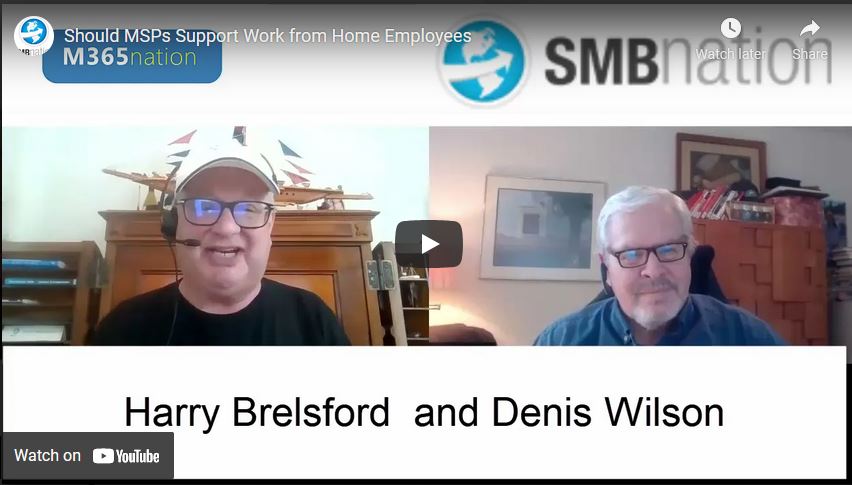 In March of 2020 millions of Americans hurried and packed their desks to set up at home, thinking they would head back to the office in a few weeks.  As the pandemic stretched into month and even a year, we are just starting to see talks about returning to the office.

A recent study conducted by Verizon shows that 70% of Americans not only want to work in a hybrid model going forward, but they also expect that they will be working one to two days a week remotely.  With 70% of the work force working in two locations MSPs are going to have to decide if they are going to support these work stations, as well as many remote devices such as mobile phones, iPads, and other devices.  Join Harry as he chats with Denis Wilson about the challenges this brings MSPs.

Hey Nation Nation, Harry here. And boy, it's my last podcast interview with the day. Thank you, sir. Wait a minute, that's not a that's not a nice way to bring in how you doing Denis Wilson? Hi, how you doing?

So enjoyed our chit chat on the rehearsal about moving and where to live and how to get there. So always a pleasure to see you. But you came loaded for bear, you are trumpeting a new horizons study about work and how work works. So give us the the 411 I feel strongly in this area. I got a couple questions.

Yeah, what we Verizon does an annual study of everybody that that they have  access to, and asking them how they feel about a variety of questions, and then publishes the report for everybody to have access to. And and so I look at it every year, they have good stuff. And, and, and the Jay McBain has been and Karl Palachuk  and I have talked back and forth about it, they did the same thing, just reading it religiously. But the one thing that isn't surprising is that the Verizon found that 70% of Americans not only want to work in a hybrid model on a going forward basis, but they also expect that they will be working one to two days a week remotely, and that their boss will set it up for them on a going forward basis to be working remotely. And so 70% guess what, there's going to be a lot of people out there that are only moving back to the office part time. And and that means that that we as MSPs are going to have to support them and and be more active about supporting them. The thing that that surprised me, though, is that that basically they're saying that they're using their remote devices for more interfacing with work as well. Not only the mobile phones that they're using for zoom calls. Yep. But but things like the they're using their pads, because they've got them at home. And they and they interface with the these devices, iOS devices and Android devices to do work with. And so guess what, I am sure that we are going to be asked to take that on. And I've talked to my guys and we're not real happy about that.

Yeah, yeah. What is it? BYOD and MDM, ma'am, bring your own device and mobile device management. It is literally the Wild West Don't get me started on the hybrid work model speaking for myself. And as I i've been vaccinated, so I'm feeling a little bit better. I mean, I'm still behaving in public, and so on. But what I've done just most recently, is I'm a member of Regis, the co worker space and they have a membership. That's akin to an airport lounge cost about the same you know, airport lounge, Alaska Airlines three year. And it's the same kind of concept at 350 a year you don't get an office at Regis those are like 25 bucks an hour, but you get the little pods to sit in, work away. The way I work is I get cabin fever. I'm in my home office right now in the Austin Texas area. And Doggone it, Denis I got to get out one or two days a week just because right that's just the way my brain works. I get a little caffeine jittery sitting in home all the time. And, and I goto Regis and I've written articles on I mean, you know, 1900 locations worldwide back when I was traveling in the day. I mean, it's gorgeous. And so I believe in hybrid work, right? And no, I don't have leased office space. And I think that's what you're gonna see. I concur is what I'm saying. I think you're gonna see that blend, where people get perhaps a little bit better work life balance by by working from home, whatever days a week, not commuting. And then but but still having the connectivity with the corporate culture in the in the cabin fever busters. Please continue. Are there other points in the study that stood out?

Well, there's there's one in particular that they they talked about, which was that that the that the the users at home are using all mostly consumer grade stuff they are and so in particular, we were talking firewalls that that have basically a plastic door in front of them that says, Come on through here. You know, it's just not making sense for us to take responsibility for it, and to risk. And we're going to be asked to do so. And now I'm not sure what we're going to do yet.

Yeah, I think I wonder if this will is. And again, not not to take a right angle on this, but having grown up Episcopalian, and I'll just leave it at that. That's a minor point. But I've seen the church split twice. Okay, that that's what churches do. And the big one was, I think, under Henry the Eighth, the Church of England split from the Roman Catholic Church. And again, not not taking a right angle on you, it's more to make a point that the point is, this may cause a split in the MSP community, right, that there's going to be MSPs that don't touch remote workers and home. And maybe they'll focus more on the midsize clients and enterprise. And then there will be the people that may be dabbled in home theater back in the day, you know, and supporting the housewife and the this and that the batik lawyer who works for him his little mother in law apartment in the second, you know, part of his property. I Denis I, I predict it because there's going to be some MSPs a couple I know who are quite large one in Houston and in another in Detroit, Michigan, they probably have too much overhead, they probably can't afford to serve that market profitably. Yeah. If that makes sense.

Well, that's one of the things we looked at, you know, doing all the the support remotely in terms of decreasing, you know, cost per person to maintain them. But we have yet to come up with a model. That makes sense.

Yeah, yeah. No, this is a really good podcast, because I think you're, you're introducing a ton. I mean, we're all talking hybrid work from home and this and that. And, you know, the Burlington Northern sent 10,000 people home and the VPN connectivity was horrible, to get back into the railroad data center. But you're introducing a concept that's a little closer to the mark with our SMB Nation at, you've set it? Do we even want to serve these accounts?

You know, and, you know, then, you know, you're even the accounts you have come to you and say, oh, by the way, I we've got the CEO going home now, two days a week. You know, in fact, I just had the call this morning with one that the CFO sent me, the CEO is semi retiring, but he maintains the daily access into QuickBooks, of course, ya know, that and, and he, he doesn't know how to run a computer, you know, and what am I going to do? These days, one of my best customers now and he's, he's 60 miles away, at home. That's around his laptop.

And I've heard the traffic's returned in Southern Cal. I was just listening to that yesterday on Sirius XM. on a on a talk piece, though, I'll end on this, the one person that has monetize this well, and as happy as a clam is a friend of mine, Carl back in Seattle, Washington. He's in the business of executive coaching for speech, right? So like Amazon executives, were maybe English as a second language. And he's helping them to give better keynote speeches and webinars and, and quite frankly, just do better at their jobs. And his secret sauce is he just says, guys just talk like you're on the weekend. Right? authenticity don't don't don't get all nervous. Like you're on the weekend. Well, what he did, so I get to the point. What he did is part of his consulting package, is he put together a spreadsheet of the sort of the ultimate CNN or MSNBC or Fox? home studio, right? Because these guys have to be camera ready. And there's no margin for error, the lighting the sound, you know what I mean? And, and he's out there rolling out anywhere from $5,000 to $25,000 engagements for these executives. Now that's the one guy that nailed it. But that's he that's that's easy. pickins because he's not a cybersecurity guys. Not an infrastructure guy. Right. He's he's setting up a TV studio. Yeah, yeah. And love in life. So

we're gonna talk about this later on and see if anybody can come up with a model. It makes good sense for MSPs who are going to be dealing with this as an add on to their existing business.

Yeah, yeah, exactly. Well, hey, can you do us? No, I agree. I agree. Let's go I'm going to make a note for for next round to double click down into this and as part of that, can you send me the link to the study? If you haven't a I'd like to read it and be I'd like to post it up I'd like to make it part of the the blog right beneath us. We'll do all right, my friend.

Take care. Thank you. Have a good day.