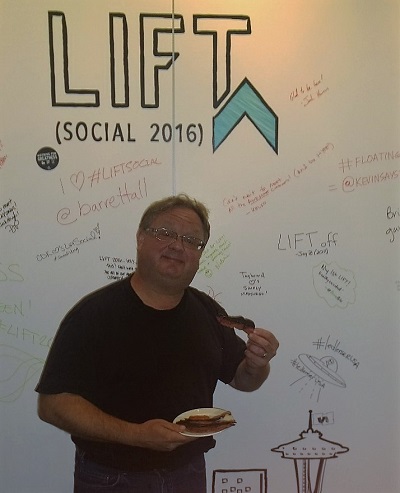 Old school SMB Nation fans remember our love and affection for BACON! Who can forget our “Save Your Bacon” campaign back in the day promoting StorageCraft? (Remember the bacon bit muffins at SMB Nation Spring?) So

when I attended Simply Measured’s LIFT – Social conference in Seattle last week, I was instantly at home when Chocolate-covered bacon was on the afternoon snack cart.

But this isn’t a foodie review, rather it’s a look at social media analytics. The context is this. If you are reading this blog and seeking to “start-up” a technology business with legs, I’d offer the world of social media and the use of analytics in this Market 2.0 era demands your consideration.

LIFT Social is an ongoing annual conference sponsored by Simply Measured, an analytics ISV in the social media space. Basically it is in the business of providing tools to measure the impact of social media campaigns businesses might execute. For example, Trek was there talking about the use of the analytical tools to measure success in building the Trek bicycle brand using numerous social media tactics such as Twitter, Facebook, Instagram, etc.

First a few takeaways from the conference and then a few observations.

Engagement is not revenue. Towards the end of the conference, I don’t know if I heard a dirty little secret in the social media space or if the speakers were being completely transparent. Loosely translated, the number of likes (Facebook), friends (Facebook), followers (Twitter) and connections (LinkedIn) doesn’t mean jack snitz when it comes to revenue. I’ve always suspected this. Social media is good for brand building but it’s not transactional by its nature. I’ve seen this in several ways. First is our beloved Karl Palachuk of MSP books fame in the SMB space. Karl has worked very hard to build his brand and hit the 5,000 friend limit for a Facebook personal page. And his brand building has resulted in overall success for his book sales. However, if engagement had a direct correlation to revenue, he’d be a billionaire and I’d be shining his shoes. Another example is how I’ll nudge people to attend our weekly webinar. When I post into an Office 365 LinkedIn group with over 90,000 members about a relevant webinar coming up soon, I’ll pull anywhere from zero to a couple new attendees. Several speakers at LIFT Social shared similar disappointments. Such is the state of the Social Media union.

Attribution. Having spent time in the Big Data predictive analytics space, there is always the issue of attribution when working with leads (affiliates and aggregators). Basically the issues surrounding getting credit for driving traffic. Who drove the click? What timeframe does the attribution apply (immediate or forever)? And so on. Simply Measured announced what it claims to be the first attribution measurement tool for social media campaigns. I’ll be meeting with the Simply Measured executive team in a couple weeks to dig deeper into this.
Spying. One speaker named Skylar delivered an impressive speech on competitive intelligence gathering using the Simply Measured tools. It amounted to keep your friends close and your enemies closer. Best speech for me.

Sources. The C-level executive at Hubspot demonstrated sources of customer traffic and Google ad words was way low on the scale (below 10%) with sources like Instagram and YouTube fairing much higher. That was an eye opener. I confirmed this later with my 18YO son when he affirmed a media buy to target millennials would be best on Instagram, not Facebook.
Young at Heart. Finally, in the start-up mentality, I found the demographic at LIFT Social to be dramatically different than SMB Nation. Women attendees outnumbered men 2:1 whereas SMB Nation events are 95% male. The average age was significantly lower than our late 40s SMB Nation member. That’s OK as it made me feel young at heart LOL.

I end with a question? Why do these social media millennials end every sentence an octave higher (riser) with the word PERFECT? Not everything is PERFFECT in social media analytics but it’s getting closer to the precise measurements we can gather today with email and adwords campaigns.