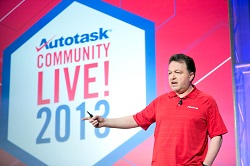 Born in the cloud, Autotask continues to articulate a surprisingly clear cloud strategy. That was my take having dissected

Autotask from top to bottom this week at its Fifth Annual Autotask Community Live! event in Scottsdale, AZ. Top cloud takeaways that are of a concern to both MSPs and SBSers are noted below.

Standard stuff. Sure you can talk about reliability, availability, four 9’s and data centers all you want. But that’s not really news. At the end of the day, Autotask views the cloud as a simple distribution model to transport its product. No drama here.

Good stuff #1. Business Intelligence and Analytics. Think of this as “Big Data” meets the MSPs. Because Autotask is a multi-tenant, cloud-based PSA solution, it’s gathering and analyzing data across sites. For example, CEO Mark Cattini said in his keynote that more than 29-million tickets had been filed already in 2013. “We can tell what people are using in Autotask and what they are not using.” Kevin Donovan, SVP Global Sales, told me.

Good stuff #2. Dashboard, triggers and benchmarking. That same “Big Data” collection also allows the individual MSP to become more sophisticated. He can use the improved Autotask dashboards to serve up data as “information” such as utilization rates, fire triggers and assists.

Good stuff #3. The cloud data allows the MSP to view performance benchmarks against themselves and the greater community. Kinda like a peer group thing!