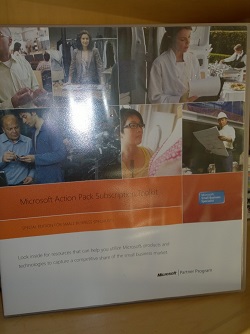 Something Microsoft insiders have known for a few weeks has now been made public. Microsoft has officially announced the end of its popular

Mixed signals. Boy howdy some days my steely nerves are tested. In recent days, Microsoft has announced earnings that exceed expectations due in part to TRIPLE DIGIT growth in Office 365. So the consolidation of the Cloud Essentials program into MAPS seems a bit awkward to me. I’ll dig deeper into this over the next few days and re-blog this matter early next week.

Here we go again. SMB Nation members with long memories will recall the revamping of the vaunted Small Business Specialist Community (SBSC) into the traditional Microsoft Partner Network (MPN) competency model. The result? A hefty admission fee to hold the Small Business Competency. It was met with mixed results.

Friends with Benefits. It’s no secret that Microsoft is my friend. And Cloud Essentials offered amazing benefits to us “earlies” into the program a few years ago. That included 250 Office 365 E3 licenses. Subsequent revisions reduced the benefit level down to 25-said licenses which, quite frankly, makes more sense. And I’m a long-time fan of MAPS – that best gift horse under $500 IT Pros have ever known. But I want to raise my hand and express concerns that I hope that the substance and form of the Cloud Essentials program continues in MAPS and isn’t quietly devalued.

The Microsoft post, sent via e-mail today, states that the absorption of Cloud Essentials into Microsoft Action Pack will take place on February 24. For those not familiar with Action Pack, it basically offers internal-use licenses for Office365, including Microsoft Office Professional 2013, Windows Pro 8, Microsoft Exchange Server 2013 Standard, and Windows SQL Server 2012, as well as various sales, technical and marketing resources for your company’s use.

Microsoft also said that it would be offering a ten percent discount on newcomers’ annual subscriptions between February 17 and May 31. For all existing Cloud Essentials customers, on the other hand, the subscription to Action Pack must be completed by June 30, 2014.