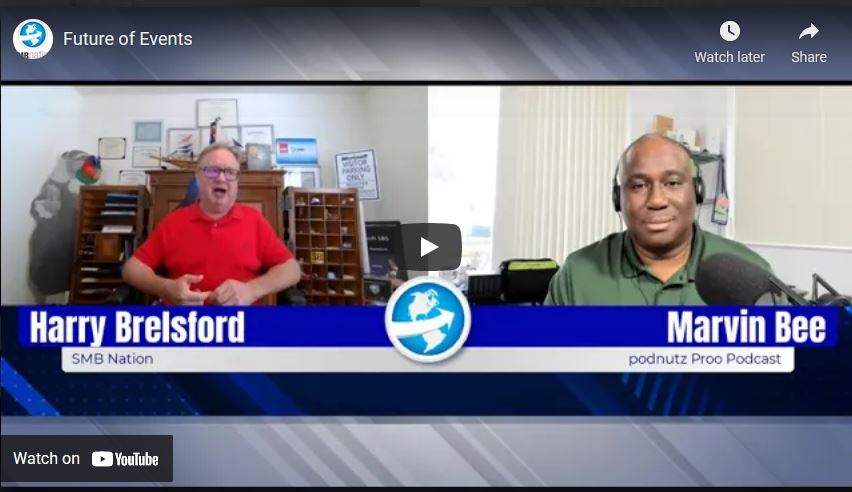 With much of the world opening back up, and people getting back to the new normal, many are asking what is the future of events?  Will they be in person, online, or a hybrid model of both in person and online?  With many people waiting for in-person events to come back in some form, most people agree the value of face to face events in the past where taken for granted.

There is nothing like the spontaneous experience of bumping into someone and having an ad hoc conversation.  With that said there are some pro’s to online events, time, travel, cost, and more.  Join Harry and Marvin as they chat about upcoming events, ones to watch for, and the ones they are attending.

Harry Brelsford 0:07
Hey SMB Nation back with Marvin Bee out of the South Florida area. Marvin, before we get going, I was looking at the the weather patterns. Seems like it's pretty hot down there right now is that understatement?

Marvin Bee 0:21
Well, it's supposed to be hot. Today it is. Well, let's just say it's rather warm but rainy. So it's not a normal South Florida day.

Harry Brelsford 0:32
Okay. Um, Hey, you, you keep a really good pulse on the industry. And I want to talk about events in the second half of 2021. You had an announcement the other day from Rob Ray, let's start with that what's going on with events?

Marvin Bee 0:48
So yeah, so we have been hearing that datacom was going to happen, but there was a little mystery about where it was going to happen. And late Friday, Rob Ray had gone ahead and put out the announcement that not only was Datacom on, but it was going to be in Seattle. And the dates for that are October 11. Through the 13th of this year. deatils Oh, yes. Seattle at the Washington State Convention Center.

Harry Brelsford 1:15
Okay, thanks for correcting me, because in our rehearsal, I went and peeked, and maybe I was looking at an old installation datacom that said, Atlanta, Georgia. So that is actually very helpful that you've cleared that up. And what are the dates on that again? My friend,

Make a note. Okay, cool. I'll call Alaska Airlines as soon as we get off the phone. All right.

Now, here's the interesting thing. So they are making this a hybrid event. So that you can attend virtually, or you can obviously attend in person. And I think that's the way that events are probably going to be for another year, we are still, even though the world is opening, there are people that you know, are still feeling a little apprehensive, even though a lot of us have gotten the vaccine. You know, I trust my vaccine, but I don't trust other people, whether they got it, even if they said they did. So I think, you know, we're going to be in that period where we need to allow for both and we want to obviously, you know, meet in person and see each other, but for people that are not comfortable, still provide a way for them to attend virtually.

Yeah, yeah, I tend to agree, I think work is going to be hybrid, I think events will be hybrid, and quite frankly, I like it. I'm back in my past life, you know, as SMB MSP analyst night, I'm still I'm still there. But Marvin, I just got into I'm gonna call it almost an unhealthy place for many years of traveling all the time, right? And I've used the pandemic to kind of look in the mirror, and just wait, why was I doing that? Why was I got all the time. And it's it's a, it takes a lot of energy. And time, probably more importantly the time right to get all the way out to the conference. And I went to, for a Cronus told you about that a couple years ago down in Miami Beach. That's a lot of travel to get out there. Right, you're losing the day age.

I think in general, that's the thing, because even virtual events over the last 18 months, I actually got to the point where I just stopped attending virtual events, because even those, I'm not gonna say that they were a time suck. But the fact that everybody was having an event, everybody was having a Facebook Live, everybody was adding a podcast, and there's only so many hours in the day. And the bottom line is most of us still have to work and earn money. So I had to, you know, cut back on those as well. And when we open back up and started attending conferences in person, I'll probably do what I did before where I'll try to keep it to one or quarter or maybe maybe even only twice a year. Just because, you know, I got to the point now, you know, being home spending more time with family. That's just as important as making the money.

Yeah, yeah. No, it is I've I've changed my ways. What are you hearing about other events? You're again tapped in Laurie to see me. does her event you mentioned another one that is happening. What do you hear?

Yeah, I've not seen a lot of definitive plans on others. Now. There is one that I was involved in in the past. I'm not on the planning committee, but tech con unplugged, which is happening in Chicago is also happening this this fall, and that'll be an in person event, and that is in September. I believe it's a 16th through the 18th. So for people that want

yeah, it's out of Chicago. It's at a hotel. called the a loft hotels just outside of the airport in O'Hare, the website for that as tech con unplugged. And that's techconunplugged. com. And you'll get all the information there.

Okay, great night. Yeah, again, I I tried to monitor as best I can these various MSP groups. I'm assuming Laurie will come back that was typically a spring conference. I haven't heard one way or the other, but I know she likes doing those. Yeah. And I'm sure some others will pop up along the way. But, you know, it's it's nice to have the options again, and I'm a little bit like you, I'm gonna, you know, instead of traveling weekly, I don't think I can go back to that lifestyle, but maybe one a month for what I do as an analyst and blogger that that would probably make sense that I can get some real work done. You are a busy man. There we go. All right, Marvin. Where can people find out more about you with your podcast? Give yourself a shout out.

All right. We'll talk to you next time. Thanks.