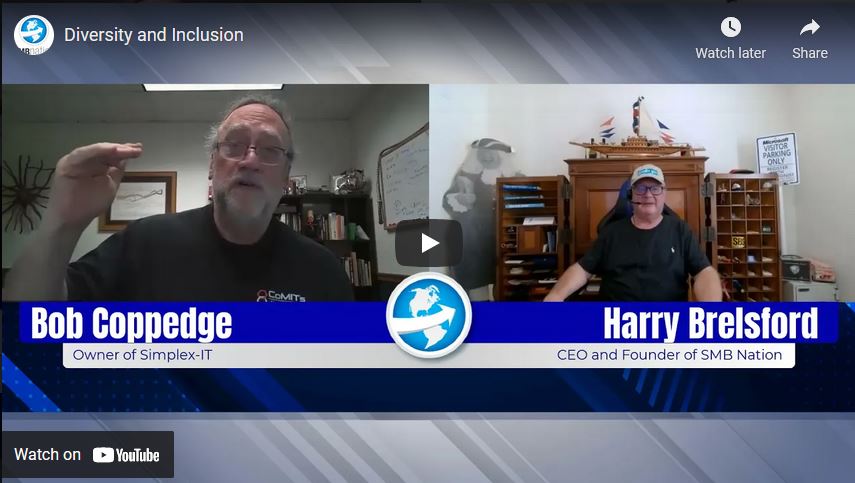 There are a lot of conversations in tech going on, on LinkedIn, and Facebook and other areas about diversity of inclusion.  With all this talk what really is Diversity and Inclusion and how does it affect your business?   According to google  “Diversity and inclusion are two interconnected concepts—but they are far from interchangeable.

Diversity is about representation or the make-up of an entity. Inclusion is about how well the contributions, presence and perspectives of different groups of people are valued and integrated into an environment.”  We meet with Bob Coppedge to chat about Diversity and Inclusion and what it means for your business.

Hey, Nation Nation back with Bob Coppedge. Bob, I still enjoy the post you do up on LinkedIn, you got that consistency thing going on? I applaud you, sir.

Thank you. Yeah, we're definitely going for quantity over quality.

Yeah, there you go. Well, I resemble that my whole career. But the, hey, listen to interesting story yesterday, my data center client in Austin, Texas. And they use me they kind of by me by the drink, hey, Harry, go do this, hey, Harry go to that. And they needed diversity and inclusion statement for their website and some of their materials. And the reason is, is the gentleman is Hispanic. And he's a military veteran, right? So he fills some buckets as he goes for government work or big company work. And happy to do it. So I started doing a little research about what that means. And then I kind of, you know, scratch my head. And I'm like, you know, there's a lot of conversations in tech going on on LinkedIn, and Facebook and other areas about these, of the diversity of inclusion. So, Sir,what's what's going on? Why is this all of a sudden, hot?

Well, I'm not sure it's all of a sudden hot, as opposed to getting a little more attention. And this is, this is one of the key things is, is just because we talk about something doesn't mean that we shouldn't have been talking about it some time ago.

And and I think that's, that's part of the challenge here. And one of the things that is happening is that whole definition, the whole word diversity is now so all encompassing, and just about anything, it's not necessarily just a social thing. You can even talk about it from a technology, should we be on premise? Should we be in the cloud? Well, no, you can be both. It's a hybrid solution. The same thing from from a social standpoint. I mean, you and I grew up, back when I was your age, we had three TV stations, and it was good enough for us.

And it was a small TV.

Exactly. I was the remote control for the house, you know, that kind of thing. But when you think about it, from a standpoint of, of not only from as consumers, we had three choices, but also the producers, there were three choices, you know, you you produce content for NBC, ABC, CBS, and that was pretty much it. All right. And so the Product Funnel was all about, it's the majority, it's the whoever has the most money, they're going to see the most stuff. Well, now, it has gotten so easier, so much easier for content to be produced, for everything to happen. And so now we can cater, we can actually talk about the diversity for both a consumer and a producer side. As well as there's so many Grammys, namely a food that wasn't created through the combining of two different cultures foods type, it's a really good point, you know, the best stuff comes out of when we when we actually collaborate and work together, organizations are finding that just simply from a let's get people to work together in terms of collaboration and all that. And I think also from a social standpoint, the more opportunities and the more differing views we have working together, the better our products are.

Yeah, yeah, absolutely. In the tech space, I mean, I understand what I did for my client yesterday. That's that's very clear. Right. So he gets the, you know, check the box in terms of business development and bids and RFPs. And all that. I get that. In the conversations I revisited, I mean, I've seen them fly by, but I kind of revisit them yesterday. I'm in the tech space, the the conversations I saw were kind of dealing more with women and technology. And maybe that's just what my feed had. Right. So that that wasn't really part of the statement yesterday. But to your point, I guess the diversity and inclusion conversation can be anything.

Absolutely,kids, if you think about it all We are sums of metadata. Yeah, at the end of the day, and and here we are, pardon my stereo typical French, but two old white guys, talking about diversity and inclusion. And from from my perspective, I look at every single aspect of my job, or my job my life that I was born into, increase the probability of success. Yeah. Didn't guarantee it still had to work for all that. But every single aspect of things that I had no control over, gave me an edge. Yeah, that means is that you have all of these other people who may have be smarter, maybe more driven, maybe more hungry, maybe whatever. They're going to have a tougher time getting their voice heard and getting opportunities out there. Now You could talk about that being unfair and blah, blah, blah. But more importantly, we're missing out on those people actually contributed. Yeah. And that that hurts me in the long run, because I can't see what those people could would be able to do.

No, I agree. And that that almost goes down a whole nother rabbit hole about the demographic. So basically, Caucasians aren't having enough babies in the US economy. That's a whole nother rabbit hole, we'll save for another time. But I'll end on this. Because you made a really good point, a little fly by that. So you know, I still do some stuff with Microsoft is a friend of the family and so on. And back when I was really more of an active vendor, there's kind of a rule in working with Microsoft that they always ask for feedback, Harry, you know, what's your feedback, but I quickly learned, they only want this much feedback. They don't want that much. And then they push in what you know, feedback, feedback. And so I wasn't lost on me once. And I didn't make mention of it. Because I know the rule now. But you know, there was this panel on women in technology, like at the worldwide partner conference, and the majority on the panel were men. I can't make this up.

But it's common. Yeah. And again, I get to it, obviously, it's just you and I talking so it can't be any other way. But and I've participated in a couple of webinars and conversations on diversity and inclusion. And you know, me, I am more than willing to open my mouth, I don't really care whether it's going to make sense or not, that's really of secondary importance. But on this topic, I'm getting better at it. But there's, there's a big part of me that says, God, don't ask me. Yeah. Because then you get into that whole thing about the whole mansplaining and the white guy going into Let me tell you how the world really works.

I know and, and I know you mean the solid a kind Well, I mean, I get it, I understand the context where you're coming from, but Well, I'll tell you what, we're gonna keep an eye on it. I mean, all the conferences now, online conferences soon to be real, but they're all they have the panels on this topic. You know, it's it's interesting to follow agendas, right?

Absolutely. And I'll tell you, I, when we hire, I do look, one of the questions I asked the people in my in my company and myself at the end of the day, are we going to be more diverse of an organization by hiring this person, I view that as a strength. Not a something that we have to do not an obligation, the more diverse an organization working together, the stronger organization I'm going to have.

Make that the final word. Thank you, my friend. Hey, but one last question. With with things you know, returning. Do you do you think you'll be one or two live events in the next six months? Anything top of mine,

I'm actually heading down to Florida next week. Oh, Robin, Robin Robins bootcamp and both my wife who's a nurse, she and I are fully vaccinated. And we've been very careful that we're both going down to Florida next week. She's actually going down with her mother to visit that we're going to be like 400 miles apart, but traveling so she's taking social distancing in a whole different direction. So this is for me, which probably is good advice.

I will give give Robin a bump in teller. Hi, thanks, Bob. Thank you.