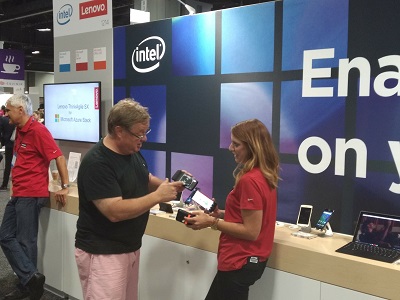 With the Fall Equinox upon us, I can now share my summer research findings concerning mobility.

This is truly a case of starting over. This summer, I tested the Android-based Moto Z Play2 as part of my journey post-Windows Phone (Nokia 1020). The decision was very simple. Increasingly the apps I want and need were not on the Windows Phone platform. And I’ve been there; done that

with the Apple iPhone (I had the iPhone 3G in 2008). As leading Microsoft partner and IAMCP executive Jeff Shuey said “…time to get appy” when briefed on my intentions. I gave my test unit and the mods a stress test by attending the recent Microsoft Inspire conference (conference in Washington D.C. in July 2017- this conference was formerly known as the Microsoft Worldwide Partner Conference “WPC”).

My NEEDS!
Years ago I listed my basic needs in a mobile phone in a blog at SMB Nation. Basically beyond the whiz-bang apps, it amounted to phone service, testing, photos and sound plus battery life. Those are still my core needs and the Moto Z Play2 really excels here. Why?” Because these featured are enhanced via the mods you can attach (and I’ve now tested).

Sound. The JBL-based sound mod, that snaps on to the back of the phone, is really a super cool conference phone feature in my opinion. While at Inspire, I placed several calls on speaker and had multi-person calls (including a few people standing next to me in a busy and loud tradeshow hall. Everyone was impressed. Finally a phone that was a real speaker phone. Bonus was when I stream Xfinity content while traveling (watching CNN), I have world class external audio.

Power. The most useful mod was clearly the Moto Turbopower Pack, a battery recharger (I use it daily). Like anyone, I fiddle with my mobile phone all day every day. I typically hit the later afternoon low energy zone. Viola – I attach the Turbopower Pack (often on my commute home) and return to full power quickly. This is important because the nature of my evening commutes has me away from power.

It should be noted that each of the mods I used came with their own power supply (e.g. up to ten hours power for the speakers or projector). However, these Mod built-in batteries only ran the actual function (e.g. sound, projector) but did not have a reverse current flow to charge the actual phone. Only the Turbopower Pack had that ability. I wish the engineering would support both the device power (speakers, projector) and recharge the phone. Why? Because it’s unlikely I’m going to run my projector for ten hours.

Projector. I used this mod the least but I do feel it’s essential as a mobile businessman. I’ve used it for pleasure, to stream a short high school graduation spoof vid for my son’s big day at the celebration dinner. I’ve used it for business to show web sites, such as a predictive analytics firm, when I was having a business discussion. And I’ve used it to show PowerPoint presentations on the fly (I showed this off at a recent tradeshow where I had a booth). Bonus is that the Moto Insta-Share Projector is available complimentary (as I write this) with the purchase of Moto Z phone (offers may vary). But for free, it’s one hellva must have.

Camera. Truth be told, I only used the internal camera (front and rear) regularly. As a blogger/analyst, the built-in camera(s) are sufficient for my digital media needs. I quickly tested the Hasselblad True Zoom camera in the Lenovo booth at Microsoft Inspire (see Fig 1 above). So it’s hard for me to remember a verdict on the Hasselblad True Zoom camera mod. I was able to zoom into the audience as seen in Fig2 (non-zoom) and Fig 3 (zoom) and clearly see the results. The non-zoom pic was about the same quality as the built-in camera, but I’m a shutterbug and I understand the value of the Hasselblad True Zoom camera for more specialized needs (such as print magazines). This mod has the effect of allowing me to leave my Nikon D5000 SLR at home when I travel for business (the Nikon would still be part of my luggage when I travel to Alaska for scenic photography).

Kindly note one matter concerning the camera function. If you have your phone brightness turned down (to save power), it results in dark pics. For some reason, the auto adjusting/lighting feature just doesn’t work well. Once I restored the phone’s brightness to a sufficient level, my pics got brighter if that makes sense. Learn from Harry on this one. 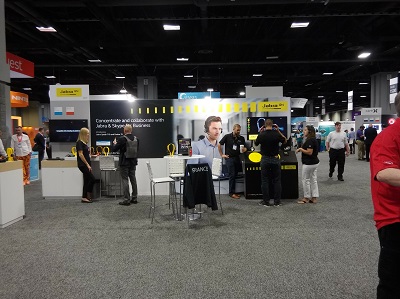 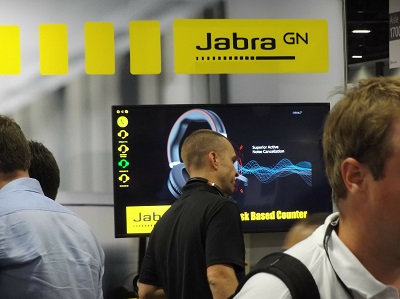 Android. I’m learning as I go with Android. So far so good with respect to the UI. But there are a few nuances. For example, the Microsoft Office 365 mobile version for Android is not as robust as the Windows Phone version (go figure). The Outlook application, while supporting my multiple business calendars, doesn’t have a proper pop-up notification when an appointment is approaching. Ergo I have missed a few appointments over the summer and have ad to modify my work habits to set alarms with the Clock app. (I’ve tried other calendaring apps such as Business Calendar Version 2.23 but found these apps struggle with supporting multiple business calendars – your reader suggestions are welcome).

My favorite summertime application? Strava. My God – you can accurately record your bicycle rides! It uses the internal GPS capability. See Fig 4. 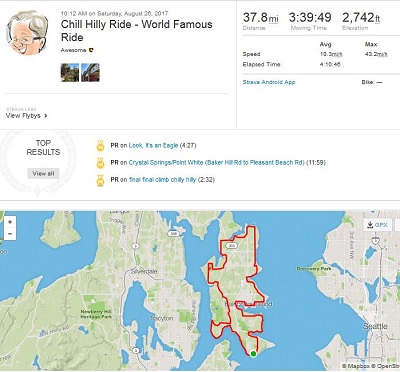 A shout out to the FM Radio app (native Motorola Mobility app version 02.02.0146). I can listen to real over-the-air radio when I’m on the ferry/bus or evening travelling in new cities (e.g. Austin, TX) and want to absorb some local sound. Interestingly the FM radio capability is new in the Moto Z Play2 edition; it did not exist in the original Moto Z Play and I was spoiled from this capability with the Windows Phone and my commute time radio listening habit. Bonus: the use of the FM Radio does not consume data or voice minutes on your mobile phone plan (I use AT&T). It behaves like an FM transistor radio (kids won’t get that).

AT&T. As I mentioned, AT&T is my carrier. But the native Moto Z Play2 support is for Verizon. Ergo I used an unlocked phone version to support AT&T. I always worry about having the unlocked version because I don’t feel you get the same performance or patch cadence. But during my summer romance with the Moto Z Play2, I have no quarrels.

I the start of this blog, I shared I know my needs as a mobile traveler, businessman and media/press analyst blogger: pics, sound, basic phone service, long power, basic apps and hero apps. The Moto Z Play2 meets my needs completely and receives the coveted “Astro” award (Astro is the mascot of SMB Nation). Bravo Moto!

PS – one suggestion. I would be nice to stack mods. For example, If I could have both the projector and the sound mods usable at the same time, my streaming entertainment content would sound divine (instead of the projector defaulting to the internal speaker on the actual phone). Today it’s one mod at a time baby.

PPS – shout out to my friend Jerry Essenpreis, IT Manager at the Bremerton Housing Authority, for encouraging me to you the finger print logon security. After a brief training session capturing my thumb print, it worked splendidly and no need to tap in a PN code.