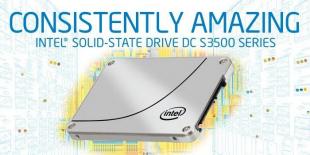 During the expo, Rob Crooke, Intel corporate vice president and general manager for the Non-Volatile Memory Solutions Group, spoke about the technology behind this new SSD drive. “When you put the new SSD DC3500 Solid State Drives in the loop with Intel's, new Xeon Processors, Network Interface Cards, Motherboards and software, it makes computing everywhere, but especially in the cloud, run at the speed of thought itself,” Crooke said.

In addition, random read performance can go up to 75,000 input-output operations per second.
The Intel SSD DC S3500 Series also includes data protection features to address IT professional's concerns of data loss. Built-in capacitors provide a short period of backup power to the drive allowing it to finish operations in the event of power loss. The drives also use 256-bit AES encryption for data protection.

More than half of U.S. businesses now employ cloud computing applications. In fact, IDC predicts that worldwide spending on cloud services will reach $44.2 billion this year.

The data centers powering all the cloud applications need to quickly, efficiently and reliably scale to handle the tremendous growth of connected users and data traffic. Intel can help with all of their current product lines including the new SSD DC S3500 Series.

Intel SSDs have enabled their chip designers to gain up to 27 percent performance throughput in massive design distributed computing environment. Intel is increasing their deployment of Intel SSDs in in their own data centers from 10,000 units to 40,000 by the end of this year. This will enable their global design team to bring products to market faster. I can't begin to image what that means for our future.

The new SSDs will be offered in capacities ranging from 80 gigabyte (GB) to 800GB and both 2.5 and 1.8 inch form factors. Available through Intel distributors and resellers, the Intel DC S3500 Series is offered at the suggested channel price of $115 for a 1.8-inch 80GB drive and $979 for a 2.5-inch 800GB drive. It is also accompanied by a 5-year warranty.