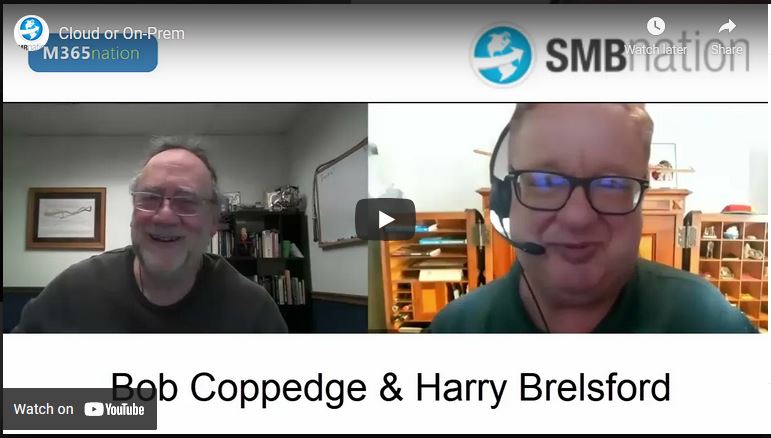 With the large number of on premise exchange (exchange being the server that runs email for corporations), there was a significant vulnerability discovered earlier this year regarding security.  With further investigation it was found that in a lot of Exchange Servers have in fact been hacked, or breacedh in some

manner.  With this news many are talking about how you should be in the cloud, and on  Office 365, because everything is safe. However,  with all this talk it was interesting to learn in the last 12 months, Google, Amazon, Azure, Microsoft, and more have all had downtime’s.   Watch as Bob and Harry chat about these solutions.

Hey Nation Nation, Harry here back with Bob Coppedge. How you doing serial out in the Midwest? I'm not in Texas?

Yes, I am. Yes, I am. And in fact, what that leads into our topic, actually. So I've been a little bit busy in q1, you can appreciate 32 years in Seattle picking up my routes, bringing it in for a landing here in the Austin, Texas area, then I got a busy month ahead of me on packing. But I missed the story of the last couple weeks, the the exchange issue, so educate me and my audience as to what happened. And then we'll talk aboutcloud versus on prem.

Okay. And I thought you were talking about the Oprah interview, but okay, no, we'll talk.  So and I don't want to go into details too much details on it, because quite honestly, there's a lot of people who have been covering it. But the bottom line was that a large number of on premise exchange exchange being the server that runs email for corporations, there was a vulnerability to discovered a significant vulnerability discovered in January or so. And it really wasn't publicly discussed until about two weeks ago. And the word on the street was you have to patch you have to patch you have to patch followed by you have to go to office 365. Why would anyone ever take such a risk for having an on premise Exchange Server, and apparently, this was discovered. They're saying right now as a nation state, probably China that actually discovered it, and a lot of Exchange servers have, in fact been hacked, or breach. The interesting thing is, you had everybody talking about how, therefore you should be in the cloud, you should be in Office 365. Because everything is save, everything is wonderful. And yesterday, Office 365 had about an hour's worth of downtime. And it's interesting, because you're never safe. Yeah. You know, and, and I've talked with, with a lot of with MSPs, and other folks in the IT business, and Google, Amazon, Azure 365, all of these guys had downtime over the last 12 months. And there was no loss of data, thankfully.  But for you to basically sit back and say, I'm gonna have 100% uptime, and a commodity based service.  It's a tough thing to do.

Yeah. Yeah, it is, and that in flames. And again, I'm glad you're sharing the story with me cuz I'm going to post it up to our Facebook group, we have that small business server group, pretty active. And I'm going to start that dialogue, because I already know one person who is anti cloud, and he'll be the first comment, you know, I know how to drive traffic, right? So we're gonna close this up, and I know who number one is. And he's gonna say gentleman's name is Mark, I won't say his last name, but he'll say told you so told you so, and, and then there's the whole.  I'll go to the other extreme. I'm on a little committee at the IAMCP International Association of Microsoft partners.  Good good group of fellas and gals. And I'm helping them out with some messaging on a partner to partner initiative. Well, they're coming at it exactly the opposite way. Microsoft is giving them content and messaging, and quite frankly, probably a little arm twisting.  Obviously, go cloud.

Not a big surprise. Take a look at any of the any of the vendors who provide any kind of technology services to small medium businesses, all of the GRP vendors are all switching to cloud based platforms of their service. It makes absolute perfect sense, both from an economic standpoint and from a quality infamous support. But you can't think of it in terms of it's gonna be 100%

No, and I don't I don't and I think that's where the expectation management needs to kick in you know, with with my move and the storms in Texas now I didn't move in the storm. Let's Let's be perfectly clear. I moved about two weeks after that. But but the context is important. I'm in a new residence and Spectrum out in the hill country. Thank you. And Spectrum was supposed to start hooking up the internet about mid February. The fiber runs just right beside and it's all good and you know, cable companies are don't get me going on that. That's a whole another episode but the storm hit and they pulled everybody in the state of Texas to go to repair. Right? That makes sense. I get that and stuff happens.  So I get down here and now they're saying it's  Alright, folks, we're talking in mid March. And they're saying there'll be a few more days before they can return to hook up new hookup. So I got a, the what is it the little side hotspot? The little side thing. And thank God it's on AT&T because AT&T is like five bars here where I'm at. And I'm actually recording this with you over a hotspot. Now what's that tell you about the quality of my connection, right that I can even record. But But the point is, you shouldn't be in this line of work. If you can't handle the heat in the kitchen, my career, I've never expected 100% Bob, it's like my sister's husband, a doctor emergency room doctor would share off camera, but he'd say, it's amazing the stuff we do even work sometimes in the emergency room.

A friend of my back in the 80s. And I actually just did another video where I refer to this. She once basically told me it's true today is the definition of obsolete in IT is doesn't work. If it works, it's obsolete. Because we're always adding new features. We're always adding new capabilities and the latest and greatest, but almost by definition has to have some kind of limitations as far as how well it works. And similarly, you've got the same thing going on. We want it to be cheap, we want it to be commodity level prices. Right? And so you have and again, you can talk like for example backups, office 365, Google Docs, all that they don't necessarily include backups not functional the way we're used to do for the small business, right? That's correct. So we have to pay extra for that. And it is interesting it is interested but you're absolutely spot on right when you talk about you have to manage and set and communicate expectations. So you can always basically say when when you get into that heat situation I told you so in the politest way possible you had a polite way is not my strike.

I yeah, I have littered what I carried the bag day to day and I missed those days sometimes.  I'm a little more comfortable now being an analyst where I just talk but what I carried the bag I mean it used to me you know how you become friends with your clients. We're all small businesses, your body's you know, Fourth of July picnic call that I told you that because you know, Jeanette was an office manager 60 person real estate firm and dedicated to her job and the owners. And I when I get a little chippy, she laughed. I go, Jeannette, between the new it's amazing, this stuff even works half the time.  And that was not too far from the truth.

I think it was Bill Gates, one of his books back in the 90s. I think it was the road ahead. And he published it right around his epiphany about the internet. And in that book, the first edition Oh, I remember that book. Yeah. And the first edition came out and said, Internet's a nice idea. But it's a beta. It's it's an initial test. It'll never survive. It's never going to be the big thing. We got to come up with something better. And literally six months later, he came out with an update to the book that said, No, no, no, no, the internet is cool. The internet is absolutely where the future is. It's absolutely. And it's hilarious. I've actually got a copy of both editions. Yeah, save that. But but it goes to the point of the internet, as it was originally designed, was never intended to do the things it's called upon to do. Not in the standpoint of the complexity, the security, the speed, the reliability, everything has been jury rigged on this industry. And we have been, you know, doing changing tires and doing tuneups and all that to a car that's been doing 200 miles an hour, you know, without making any stops whatsoever. So it is amazing. This stuff works as well as it does DNS itself is amazing. It works. Yeah, it is two final thoughts.

One was I think it's actually the the beauty of a beautiful thing about the internet that was created in a decentralized fashion. Truly, right. So that's actually its strength, and Ergo, your strength is sometimes your weakness.  But the other thing and I'll end on this since I have recently made the move I referenced but God bless the internet. I mean, it has made zoom towns possible. And that's a that's a whole nother talk with you. In fact, I'll put it on for next month. But you know, these Colorado ski resorts that were kind of on the decline from climate, right, the ski season doesn't quite go into late May anymore, maybe goes to about April 1.  They got a second lease on life, man. I mean, they're thriving, and why not? You know, you're mister. You work for Oracle and we're moving to telluride.And because of the internet well hey, thanks for introducing us, educating us on the exchange outage. I want to fast track this one and get it up into the group. The SBS group on Facebook folks. Bob, sir, thank you and we'll talk to you next month. I