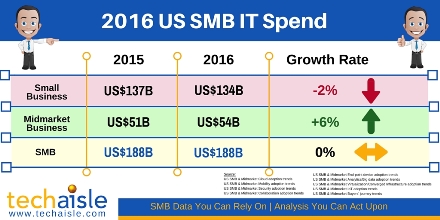 Techaisle forecasts that US SMB IT spend growth rate could very well remain flat at US$188 billion in 2016 as compared to 2015. However, the US midmarket spending growth will likely increase by 6% whereas the small business spending will fall by 2 percent in 2016 from 2015.

In early 2015, Techaisle had forecast US SMB IT spending to be US$180B by end of 2015 – based on most recent Techaisle SMB surveys the actual spending for 2015 came in at US$188B. Techaisle survey data shows some very interesting patterns for planned SMB 2016 IT budgets across different employee size businesses. Small businesses show progressive fall in IT budgets until they reach a certain size whereas midmarket businesses show budget increases until they reach a certain size.

Although 52% of small businesses say that technology helps drive the direction of their business, the very small businesses (less than 50 employees) have lowered their IT budgets for 2016 varying from -2% to -6% depending upon size of business. This is primarily because of less spending on end-point devices and IT services. Especially within the micro-businesses, spending on mobility is likely to fall by as much as 10%. Survey data shows that IT spending by small businesses is shifting to cloud, managed services, analytics and even IoT as indicated by planned budget increases in each of these technology categories. Only the 1-4 employee size businesses are planning to keep their 2016 cloud budget same as in 2015 as these businesses are reaching a theoretical limit of paid cloud usage.

Small business IT spending is effected by restrained growth in 1-49 employee sieze category businesses. The 50-249 employee size segment is expected to have the IT spend growth rate in 2016 and should be the sweet spot for most IT suppliers.

Technology purchase is not an easy decision for SMBs, where most use their existing budgets and in many cases they have to deal with ad hoc purchases due to changing business conditions. In such a scenario, role of financing is becoming increasingly critical to technology acquisition decisions for 59% of midmarket firms, twice that of small businesses. With an explosive move to cloud, 35% of midmarket businesses indicate that they are moving to OPEX-based agreements. Small businesses are leaning towards leased-based purchases for infrastructure solutions.