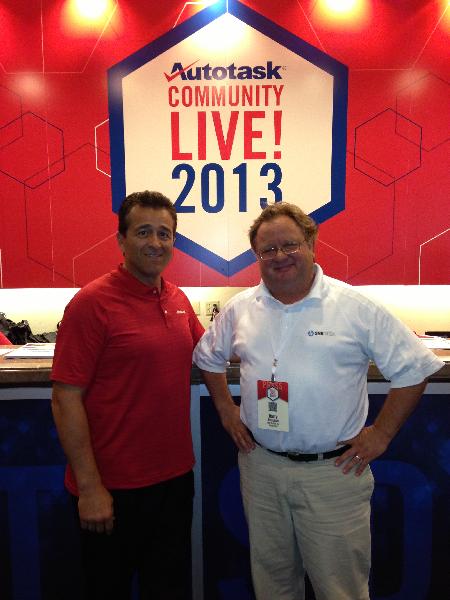 His mother would be proud. As a young boy growing up on the streets of Brooklyn, who would have imagined that Len DiCostanzo

would now, in 2013, be taking the stage (as Autotask's SVP for Business Development) in front of hundreds of attendees at Autotask Community Live! held at the 5-Star Princess Fairmont Resort in Scottsdale this week.

What started as a side conversation at SMB Nation’s 2007 Fall Conference at Microsoft Redmond with Autotask’s then-CEO (and Founder) Bob Godgart , eventually led to Len’s current Autotask opportunity--and what a great conversation that was—Len is currently into his into fifth year of employment at the company and is now a senior management figure at the “new” Autotask.

That’s actually what Len and I talked about: The new Autotask. Most MSPs know that Autotask has changed greatly in the past 2.5 years when its new CEO, Mark Cattini, assumed the roles and responsibilities held by found Bob Godgart (who was greatly missed at this year’s show). In no particular order, we discussed:

· Cloud computing. Autotask started in the cloud, and its DNA resides there. Len quoted impressive uptime figures (an honest four 9s) and pointed me to a better cloud conversation I’ll post up later today.

· VAR Street. Three years ago the VAR Street acquisition was trumped with great fanfare at the Autotask Live event in Miami. Then it was gone. Len described it as Cattini’s focus on core competencies to divest this business unit – back to its original owners, no less. Surprisingly – VAR Street didn’t have a booth at this event, leading me to assume there truly were synergy issues. But Len stands by his belief that services need to be sold with product, citing his time as a practicing MSP/IT Pro back in the day.

· Overuse of the term MSP. Len shared that the MSP community is only part of the Autotask customer portfolio. Agreed. He points to the breadth of IT business models served by Autotask including billable hours, break-fix, CSP and more. We’re an industry of buzzwords, so point well taken, Len.

· Autotask Go! This one hurt: Launched with T-shirts, swag and parties at the SMB Nation 2007 event at Microsoft Redmond, it was end-of-lifed 18-months ago. Simply stated – it didn’t find its fit as an entry level, reduced functionality solution.

· Teaming. Len’s job in biz dev is to form alliances and teams. He points to success road shows with N-able as one example. He’s actively working to build relationships with HP and IBM along with Ingram Micro and Synnex.