It was all explained to me a decade ago by well-known SBSer and SMB Nation member Bob Hood from Chicago, IL. Loosely translated he indicated many a wise person has gone to their grave trying to “beat the street” in investor parlance. Yet it seems that Harrisburg, PA-based D&H Distributing has done exactly that according to its most recent quarterly report. Because D&H Distributing in privately held, it doesn’t file standard reports like a 10K statement so it’s a bit difficult to confirm its growth; it doesn’t report revenues or earnings. But taken at face value, here is what I know about D&H’s success in beating the street.

Server-side
Gartner reports that server shipments grew 2.4 percent in the second quarter of 2017 after declining 4.2 percent in the first quarter of 2017. IDG reported similar numbers. If you look closely above, D&H is reporting that Server Products are up 36%, clearly a case of beating the street. But hailing from Seattle and the home of Microsoft Servers, forgive me for being a bit skeptical. I dug a bit deeper.

First there are two different measurements. Gartner and IDC are measuring server shipments. D&H is measuring the category of server products. So the growth rates don’t align (not apples to apples). D&H offered the following as sources of server-side growth.

1. Server refreshes – Small businesses tend to lag behind in upgrading technology. There are a number of five to ten year-old servers out in the small business channel running Windows Server 2008/2008 R2, and we are seeing a bit of a refresh cycle for that market.

2. Component and accessory add-ons – Many competitors and peers in the channel focus on selling a lot of inexpensive servers. D&H focuses on selling servers built to last. We sell more memory and hard drives per system than our competitors, on average. We sell upgraded RAID solutions on average far above the channel. We sell remote management modules, encryption modules, premium RAID keys, and other advanced technologies, even on servers for small businesses. All of these items are sold based on the value proposition of each one. The greater market tends to selectively overlook this strategy.

3. More sophisticated server solutions – D&H actively recommends high-availability solutions for our clients, typically two or three servers and an iSCSI or FC SAN. Most of the channel reserves this kind of solution for the mid-market and up, but there are a lot of small businesses who rely heavily on their data and systems being available. Those are the customers we cater to.

4. Focus on new technology – when Intel brings out a new family of technology, we drive that message in the market not only through our Intel customers, but through our HPE and Lenovo DCG customer bases, also. We find that we traditionally get a head-start on selling the latest and greatest by educating our customers on the value proposition and business advantages of moving to a newer technology platform, which tends to bring some server upgrades onto the calendar for D&H and its customers.

Any way you slice it, it’s both bold and impressive that D&H can beat the street. It’s niche focus on small business has resulted in extraordinary returns from expertise. 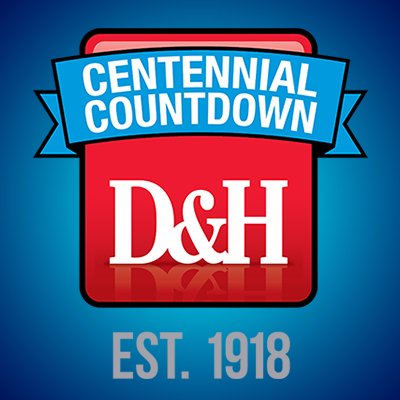 Forward looking
D&H is headed towards it’s 100-anniversary and it expects to add a 5% increase in its customer base over the next 18-months. “The distributor foresees significant opportunities for resellers who are looking to expand, as the industry faces a potential SMB back-office refresh cycle, spurred by the latest end-of-service dates for Microsoft Windows Server 2012 solutions.” What it’s referring to is the end of mainstream support on January 9, 2018. You read it here first!

Computer products and consumer electronics distributor D&H Distributing supports this, and announced it will offer a height-adjustable desk, ergonomic products and fitness-related items to VARs, after continued in-house efforts to encourage a healthy office.

“The World Health Organization recently identified physical inactivity as the fourth largest killer worldwide, superseding even obesity. Such reports are driving companies to promote more dynamic and comfortable postures for their employees over the course of the day,” said Jeff Davis, senior vice president of sales at D&H Distributing. “Our own management acknowledged this, and realized the trend might point to a new sales opportunity for resellers. Much like our ‘green’ initiatives, this campaign can deliver benefits beyond just technology. It can contribute to the wellness of the workforce.”

Innovative’s Winston Sit/Stand Workstation, adopted by some D&H employees through a company initiative, adjusts in height to accommodate sitting and standing attitudes and negate some effects of a seated working environment. 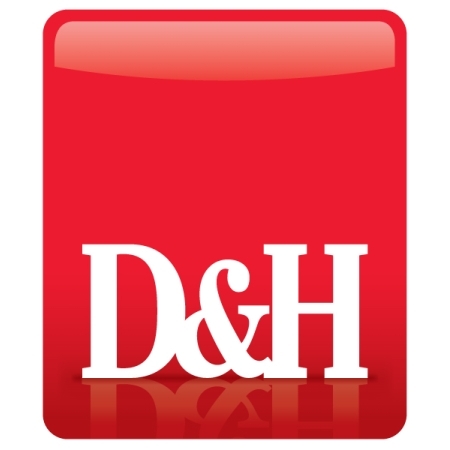 Earlier this week, D&H Distributing announced that has added new resources for its backup and disaster recovery resellers. These new resources include an interactive Solutions Lab webcast, to be broadcast this week, as well as a new marketing template for resellers to use with their end-users.

D&H Distributing today announced that it has been recognized in the ASCII Group’s 2013 Distributor Survey. This marks the 5th consecutive year that D&H has earned recognition as a top distributor, and, in 2013, it surpassed previous numbers by winning one more category.

Earlier today, D&H announced that is has seen an 11% growth rate in Q4 2013. Trends such as Mobility, and devices including tablets and servers have driven this high growth rate at D&H. The company is currently celebrating their 95th year.

D&H today announced that it is working with vendors to develop competitive Black Friday and Cyber Monday pricing for the 2013 holiday season. Expected discounts will include rebates of between a couple dollars to $300.00 per item, depending on the original price tag, and D&H said that they currently have 400 discounts in the works from companies such as Acer, Microsoft, Samsung, Linksys and Case Logic.

D&H Distributing said today that is has finalized plans for its annual Mid-Atlantic Fall Technology Show. The event, which will be held near D&H headquarters in Hershey, PA, will take place on Wednesday, Oct. 30, 11am-8:30pm.

D&H Distributing said that it has furthered its partner services initiatives via CRM (customer relationship management) capabilities through use of Microsoft Dynamics CRM.  The distributor will integrate this product with targeted, content-rich marketing and communications campaigns to more proactively support and educate its reseller customers, as an extension of the distributor’s personalized customer service model. 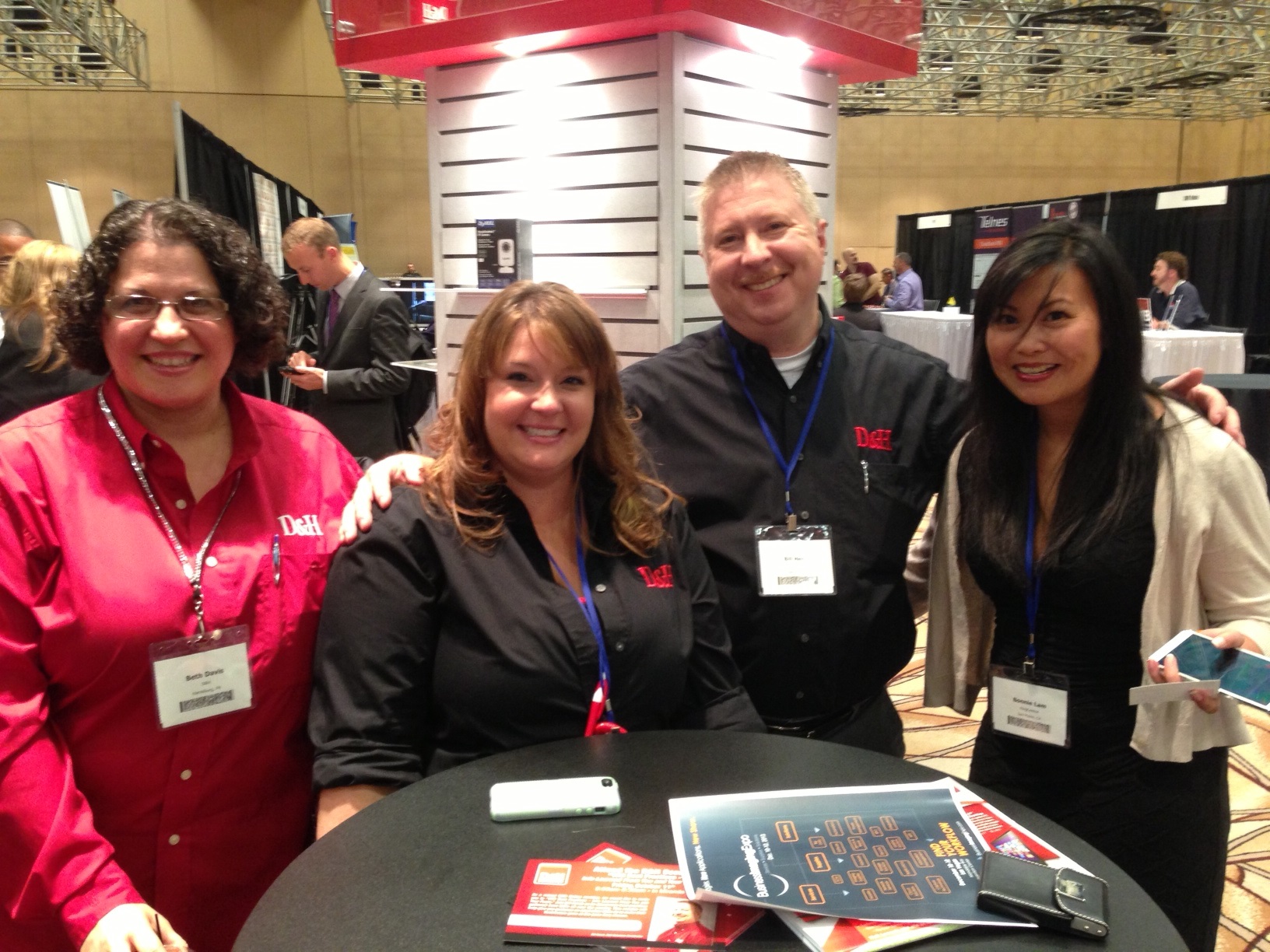 This morning, SMB Nation kicked off its second day of programming in Las Vegas with Bill Hersh of D&H discussing VAR Best Practices. In true Vegas fashion, Bill’s session featured a lively discussion which included complimentary morning Mimosas, Irish Coffee and Bloody Mary cocktails! I am sure the crowd was already engaged in the discussion, but of course a morning cocktail doesn’t hurt, especially when you are in Vegas!

D&H's Bill Hersh poses with his fellow staff members and attendee at the distributor's booth at SMB Nation's Fall Conference.

D&H Distributing told us today that they will conduct their New England 2013 Technology Show on August 6 at the Boston Marriott Quincy Hotel, Quincy, MA.  The distributor said they will expect close to 500 attendees and more than 60 participating vendors for this event.  Registration begins at 11:00 a.m., with seminars initiating at 12:00 p.m. The exhibit floor opens at 3:00 p.m.

D&H Distributing has added new resources and capabilities to its Partner Services marketing program, as the offering hits the one-year milestone.  Partner Services offers resellers an expanding library of customizable brochure templates and an array of vendor materials that VARs can use to promote their own services.