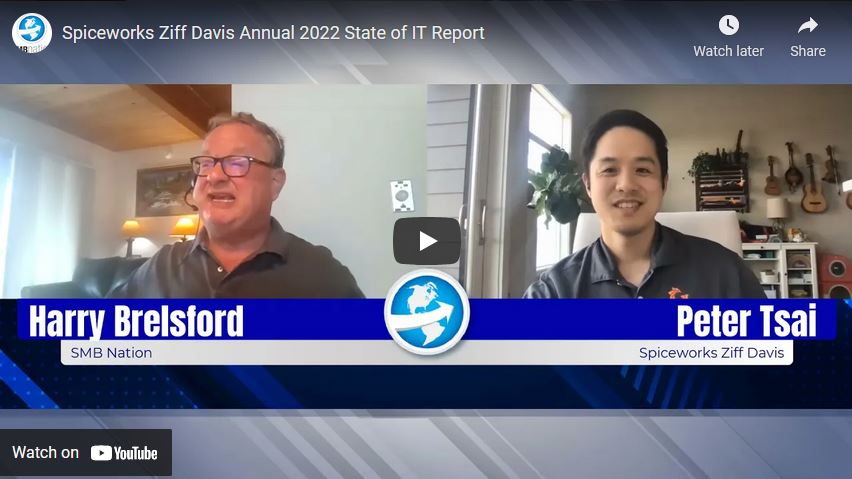 In late September Spiceworks Ziff Davis (SWZD) published its annual report, 2022 State of IT, providing insight into IT budgets, and tech adoption plans.  Spiceworks Ziff Davis has been doing this research for about 10 years, and every year they interview more than 1000 IT professionals to come up with the future trends and data included in the report.

We meet with Peter Tsai as he share some of the 2022 State of IT Report Highlights.  For more information and a complete list of survey results, visit: https://swzd.com/resources/state-of-it/

Hey Nation Nation, Harry, here it is September 28. And that's an important date because today Peter Tsai  the team at Ppiceworks Ziff Davis I still call you Spiceworks. released their 2022. state of the it report, it's a highly anticipated annual report. Peter, over to you what's Uh, what's what's behind this report, you work on it a couple of months, you do a lot of research. What do you see last year? More importantly, what what do you see in this year?

It's an annual report we put out every year. It's about IT budgets and tech adoption plans. And we've been doing this research for about 10 years now. And every year we interview more than 1000 IT professionals survey that we put out, and we're looking at future trends. So it's 2021 right now, but we asked them about what's going to happen in 2022. Yep. And every year, we put out a report, as you mentioned, previously, we put it out at Spiceworld our annual convention. And I just got back from presenting it to a live audience. And it's been live since this morning. And some of the key highlights are, we saw that remote work has driven a lot of changes in it. And a lot of people have been forced to work

remotely. But you and I are doing it right here. remote work. Yeah.

This is my living room behind us. And you mentioned, you still call it Spiceworld Spiceworks. So I'm wearing a T shirt. But this year, we found some really interesting findings, a lot of businesses are much more optimistic than they were in the past. Last year, a lot of companies cut back on non essential spend. But this year, revenues are going to be up IT budgets are going to be up. So 61% of companies said that they expect to make more money than they did in the previous year in 2022. And 53% of companies anticipate increasing their IT budgets going forward, which is great news for both IT pros. And for tech vendors.

Excellent. Look at it the report, and it's broken up into six chapters. And it's sort of a, it's kind of like an ebook. Is there a downloadable PDF for this? Or is this the format that you've released to them?

we're embracing the future. So it's a it's a interactive, not necessarily ebook, but it does have the chapters, as you mentioned. And it's online mobile friendly. So you can read it from whatever device you want.

Yeah, so let's make a couple questions. The future of it careers. I went to your analyst briefing a week ago. And it sounds like people are open and receptive to changing jobs. I was surprised by that. But what do you know?

Yeah, so remote work is going to be big, as you know, it already is. And it's going to continue to be in the future we, we estimate about a quarter of the workforce will be remote, permanently either hybrid or fully remote. And also next year, we think about a quarter of it, professionals are going to look for change jobs going forward. And remote work is going to be a really bad option because 86% of those who said they were looking for jobs, said that they would look for a remote job or consider one going forward.

Yeah, I've just double clicked into chapter 320 22. It budget breakdown. And I'm looking at looking at one of the charts, hardware budget breakout. And you're seeing a slight decrease, we certainly see the bump in laptop spins last year, I'm assuming reflecting the pandemic share shift that everyone ran out bought laptops. That's decline, a point desktops steady at 14% of the hardware budgets and no decline but steady servers two years ago 14% down to 11%. So let's talk cloud computing. What are your findings in cloud? Because that's where I'm going with this?

Sure, yeah. So every year we break out the budgets by software and hardware from infrastructure. But we also asked about cloud and managed services. So year over year, we've seen cloud spending increase as an overall percentage of it spent. So it's up four percentage points year over year as a as a portion of the overall IT budgets that that our IT professionals are allocating in the new year to come. So as as we've seen that shift, we've seen some share, taken away from hardware and software in the areas that relate to on prem infrastructure. So for example, in software, we saw Oh, spending down a little bit. We saw virtualization spending down a little bit while that money is shifting into Cloud.

Okay, and then maybe the final question I have and give it back to you for some closing remarks. I'm looking at telephony, the spend and telephony holding steady at 5% over the last three years. Does that category include unified communications, or is that a separate category because I expect it to be going up.

Right? So it is a little bit separate, we do have a special report coming out probably in another couple of months about specifically workplace communication solutions, which would include unified communications and productivity type solutions, such as slack and teams. But you know, we did a, we did a separate survey right after everybody went remote, talking about polyphony a little bit. And the reality is that a lot of people are still using either Voice over IP systems, or they're, they're using Unified Communication solutions that will allow their phones to still ring from their work numbers. So it is a bit of a complex topic. We didn't necessarily specify in our survey, whether telephony encompassed a very specific type of communication solution. But we did have extra questions that we didn't publish it specifically about some of these newer communications technologies that we'll we'll cover in a future day.

Okay, and I'll let you take us out any final thoughts? He actually have a portion here called conclusions and takeaways you want to give us one or two of those? And we'll call it good for your

Yeah, sure. So overall, as I mentioned earlier, we have a very optimistic outlook for 2022 budgets are up, revenues are expected to go up. And with this shift to remote work, comes the shift to cloud services and managed services as some budget for on prem software and hardware shift that way. Additionally, we see a lot of companies that cut back on spending in previous years plan to reinvigorate their modernization efforts, especially around merging technologies. And we see a lot of these changes are going to be driven, as we mentioned before, a by a prioritization on some of these IT projects. Now, more than ever, I think a lot of companies see the value in it as an enabler of, of productivity among the remote workforce, whereas before, they might have viewed it as a cost center. So we think all of this news is really positive for everybody in the spiceworks community, whether you're an IT professional, or tech men are trying to help companies do their jobs better every day. So yeah, we saw a really clear message this year, that that remote work is really catalyzing change, and businesses are ready to spend.

All right, well, great. Yeah, I have read the report. Attend that you're briefing folks. You can click on the link below in the blog to download it or, well, that's not true. It's interactive. You don't download it, but interact with it. Will keep me on the shortlist of your research. Thank you very much.

We'll do and thanks for having me.