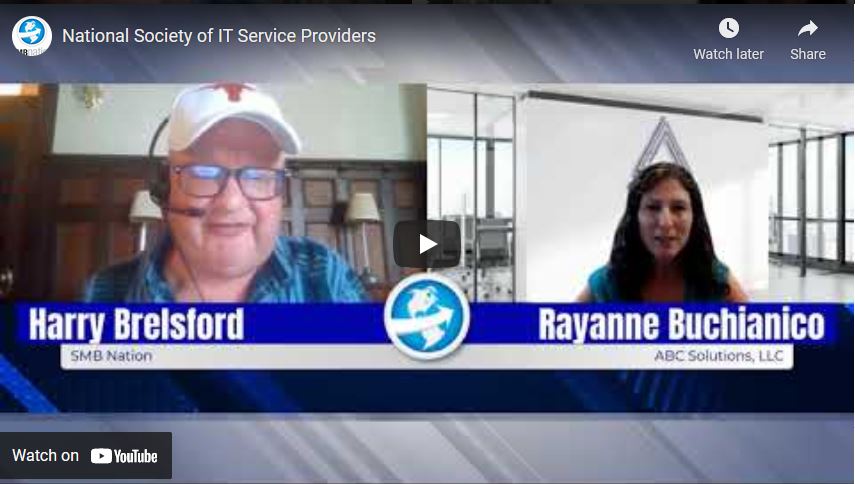 With tax revenue down and states hurting, many states are looking for every dime they can.    With the goal to bring in more funds, MSPs and other small businesses  are seeing an increase in tax audits with a focus on use tax.  Use tax is a sales tax on the use of goods or certain services when sales tax has not been paid.

Harry meets with Rayanne who is currently undergoing three separate sales tax audits from different states, to share her thoughts and what you need to do to protect yourself.

Hey, nation nation, we are back with Rayanne. And it's been a couple months since we chatted and you have some breaking news, first of all, how are you doing?

I'm doing great. You know, life is great here in sunny Florida. So far, you know, we're just breaking into spring. So it's been awesome.

There we are. All right. Well, what's news? He said, You've been doing some thought leadership stuff up here. What? What are your thoughts?

So let me just put this out there. Because so something super crazy is going on. And last time I saw this, as I sat back, and I think about it, the last time I saw this was during the real estate crash in 2008-2009. Yep, states are hurting. And they are looking for literally every dime that they can. And so why am I telling you this, Harry, because I'm currently  undergoing three separate sales tax audits. So, so this to me, they're in different states. So I can't just say that it's all localized into one state. But I will tell you that a common denominator, that seems to be the factor here, use tax. So when you purchase something for use in your business, and and you don't pay sales tax on it, when you buy it, you have to pay what's called use tax. So if you know you purchase something, and you pay sales tax, and if you don't pay sales tax, then you pay its sister tax called use. And if your sales tax returns, never show use tax, look in your mail and watch out because I think they're coming around again, then that's, you know, I hate to be the bearer of bad news, you know, but I'm seeing it happening. And I see a lot of MSPs in a lot of technology companies out there learning the definition of use tax. So if you don't know what it is, you know, talk to your tax preparer and do it quickly and find out what it is and what you need to do.

Well, I like it, because it's analogous to a conversation I've been having recently with social friends, professional friends, different walks of life. Just just had it over a long weekend recently about this, the housing market, but stick with me on the analogy, right. And there was the really good movie called The Big Short about the 2007/2008 housing crisis, right. And there was like this one Brainiac who sought before anybody else, right? He's like, he just, you know, he's, he's doing the econometrics and it just wasn't adding up the strength in the housing sector. Right. It was artificially inflated with loose lending underwriting and this that the other and, and I've had the conversation like, and I don't mean to sound braggadocious but I, you know, have a little fun with it. But like, Am I the only one seeing the coming housing crash? I mean, this is artificial with zero interest rates. And we're in a pretty severe pandemic recession with relatively high unemployment rate. And then   Rayanne, you know, you follow the financial news, I'm sure we're, you know, 6 million people have now missed their monthly rent I mean, this this nobody see the coming crash, how can these markets be going up? 30 and 40%. So I'm taking a short position, but it's analogous to what you're saying that these these are funky times and they history repeats itself? I'd love to get your thoughts on that.

Yeah, that's, you know, and you're right the housing market cannot possibly sustain itself and we've known that we actually knew it you know, years ago before this pandemic hit that that we were headed for another bubble. And of course, you saw big cities you know, in New York and San Francisco as people you know, the mass exodus out of these big expensive cities into the more affordable you know, North Carolina and rural parts of the country, you know, but you know, even they are struggling to maintain you know, affordable housing at this point. So, so your right to you know, at some point in the next I would say in the next year or two things are going to start the dust is gonna settle and and we're due for a correction there's no doubt about it. There's there's

Yeah, and and with my friend, I don't know how we got off topic. It's just fun to talk to you but with with my well known relocation to Austin, Texas, Austin's overheated and   Rayanne  and I'm sitting on the sidelines. I, I'm a renter today by choice, and there's reasons for that there is zero inventory, even if I wanted to be a buyer. But from a portfolio point of view, I want to sit on the sidelines and you know, I I think the listeners to this podcast come out of the few minutes we spent together here, hopefully, why is there specific to the first topic about  use tax and MSPs? I mean, that's why we're here. But But folks,   Rayanne and I and others, we like to get you outside of your bubble, right? I want you to think about the macro economy.

You know, I'm with what's going to happen in the big picture. Because if one starts to topple, you know, other things are gonna start to come down with it. It's, you know, it's just a domino effect. So, yeah, I totally get it. And you know, and I was a runner for a long, long time, like, right after the housing crash, you know, I thought, Man, I don't want to own any real estate right now. I didn't want to be responsible for buying, you know, a foreclosed piece of property, you know, and having to fix it up and who knew what was going to happen? So, you know, kudos to you. I actually wrote a paper, you know, why it was better than own and, and I turned it into my professor was, you know, it was back in school, turned it in. She was like, I really wanted to argue this, but you really put up a good argument. Someday I'll have to dig up that paper. It was fun.

Yeah, yeah, I'll end on this. Because my sister and her doctor husband are faced with. They're both headed to retirement. Seattle's hot. And now's a good time to sell. The problem is Seattle's hot, and he has to work a few more years. So do you buy at the top? No. You sell at the top? Do you rent and she was all bothered about renting. And I said Actually, it's it's not that bad. You know, why? Rayanne, um, because you get a what I call liquidity preference. The nice thing about renting is one email in my news, if I find the right house, one email, and I'm out of my lease, and I think the penalty is one month's rent. That's fantastic to have that liquidity, right. There's real value to look with.

Well, I'm a pretty irresponsible person off hours. So that sounds good to me. Hey, I got a run. So nice to see you. And we'll catch you on the flip side.

All right. See you Harry.