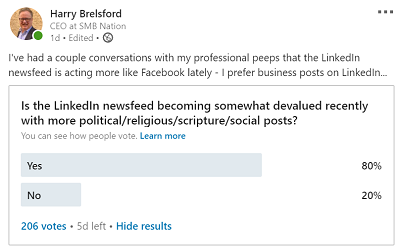 I want my LinkedIn back!  I’m a traditional LinkedIn fan boy for a number of reasons and have watched it mature in mostly favorable ways since it was acquired by Microsoft and become less of a jobs site and more of a business networking platform.

Peeps will recall that we’ve had a front row seat in LinkedIn’s evolution since it’s participation in the SMB Nation 2008 Fall Conference as both a presenter and sponsor.

But I assert the LinkedIn newsfeed has gone too far!

I want posts on the LinkedIn newsfeed to be business-related with timely content and even “brags” about the awards you’ve won and the events you are attending (live in the past; online for now). But in the next few months during the pandemic, I’ve noticed that LinkedIn’s newsfeed is behaving more like Facebook with partisan political post-ups and even scripture references from the Bible. In short, that’s not what I signed up for at LinkedIn. If I want partisan political fire starters or faith-based evangelism its only one tab away on Facebook.

While I obviously have my own view that the business of LinkedIn is indeed business, I ran a poll to see how YOU feel. Here are the results: 80% of the 206 votes cast (as of this writing) were in alignment with my sentiments that LinkedIn’s newsfeed has become devalued with the Facebook-like non-business “social posts” and such. There were over two dozen sincere comments that you can read HERE that are both pro and con.

BTW - the poll is still open as of this writing if you want to particpate ;)