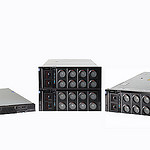 This morning, IBM announced the debut of its sixth-generation enterprise X-Architecture for System x and PureSystems servers, designed to support analytics and cloud. I was able to discuss this news with Alex Yost, VP & Business Line Executive for IBM PureFlex, System x and BladeCenter, who filled me in on the updated system.

Alex began by explaining that the first generation of the Gen-X architecture emerged in the late 1990’s, when the company owned 8% of the market segment. Fast-forward to 2013, and IBM, which has been partnering extensively with Intel, represents 28% of the enterprise server market share, and the Gen-X system is in its 6th generation.

The latest generation of the X-Architecture has been designed to be faster, more agile and more resilient than previous versions. Alex explained to me that the new systems, announced today, feature integrated eXFlash memory-channel storage, the first of its kind in this industry. This feature allows users access to up to 12.8 terabytes of flash storage, located close to the processor, which reduces latency for database operations and analytics applications.

On the agility side, the X6 systems come in three configurations: System x3850 X6 four-socket system, System x3950 X6 eight-socket system, and the IBM Flex System x880 socket “Flex” version, which allows users to scale up and down as their business develops. In addition, users currently employing an X5 cluster may easily add an X6 cluster to their existing system. The new systems also support a wide range of applications, such as SAP Hana, SAP Business and Microsoft SQL.

Finally, Alex explained about the redesigns to increase system resilience. The X6 systems have an increased memory and storage capability, which allows for better SaaS delivery for applications. Alex also explained that this is essential for running analytics applications, which is a growing trend for businesses of all size. In addition, the X6 features an autonomous, self-healing CPU that works to identify potential failures and proactively fix them.

For more information about the new X6 servers, please visit the site here.