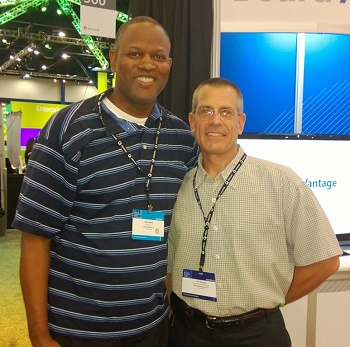 Sadly, we’ve lost a pivotal member of the Small and Medium Business (SMB) IT Pro community. Read on, as this isn’t your normal mention of someone’s passing. This is about Dino White who, earlier this week, succumbed to the effects of a major stroke suffered approximately 18-months ago.

Some readers will recall we originally reported on Dino’s stroke in late October 2013 here and here.

Dino was an SBSer (a Small Business Server enthusiast). He attended several SMB Nation workshops and conferences, and he was one of our leading customers. He had the perfect bi-lingual balance between business acumen and a technical skill set. One day you’d see Dino in an Intel-branded vPro golf shirt and the next day he’d be wearing a collared shirt in his hometown of New York City attending a business marketing symposium at the Harvard Club (I was there with him). Dino, as a small business owner himself (owned and operated Dicyn Solutions for over ten years) also held the entrepreneurial attributes of being a finder (get the business), minder (manage the business) and grinder (do the work) that is an extremely rare skill set. Turns out Dino, who was soft spoken and humble, was also a star football player in college at Eastern Carolina University (Go Pirates!) and went on to earn a Master’s in Communications at Emerson in the early 1990s.

But this blog is really about Mr. Community – Dino White. First, the resume and then the back channel. Dino was an early and active member of the New York Small Business Server (NYSBS) group. He started and directed the North Carolina Information Technology User Group that had a special emphasis on threat management (Dino had family in North Carolina and travelled there frequently). But most importantly, Dino started and was the driving force behind The Framsyn Initiative. The Framsyn Initiative is a program that seeks to help high school students who are looking for careers in IT, get training, certifications and hands on experience to help them secure employment after graduation.

The Framsyn Institute was an undertaking that Dino directed at his own expense, with his own time. I remember him coordinating with UBM/CRN/TheChannelCompany/EverythingChannel at its Exchange conferences to have worthy kids attend a real professional technology conference. Dino coordinated with Microsoft for on-site training at these events along with complimentary certification test vouchers so these young people could attain the Microsoft Certified Professional (MCP) title. I’ll never forget Dino surprising me with a phone call that he was in Seattle meeting with Microsoft about his community outreach efforts. We got together at a popular Mexican diner later that evening for margaritas. And I’ll leave it there.

PS – Join us next Thursday at 10AM Pacific as I spend a few minutes on our weekly webinar remembering Dino at the start. Sign up HERE: http://www.smbnation.com/webinars

Note from the SMB Nation Team: Our hearts go out to Dino’s family during this difficult time. We remember Dino as a kind and warm person at our events. His gentle nature and good humor will be missed.