Perfect Timing – A Mobile Phone That Meets My Needs

Long-time SMB Nation readers will recall my mobile phone journey from Apple to BlackBerry to Windows Phone. Today I’m limping along with an aging Nokia 1020 that I originally purchased for its state of the art camera (40+ megapixels). That’s right– my need with my phone beyond basic communication was to have a kick ass camera. Fast forward the movie and I’m shopping for a new mobile phone.

I’ve made the decision to roll with an Android-based phone that doesn’t catch on fire. I need a superior camera, great sound and basic functionality and then some. I recently went on a first date with the Moto Z phone from Lenovo (Lenovo acquired the Motorola phone business October 2014).

Features
The Moto Z is a capable Android-based phone on its very own. But it’s the Mods that add extreme value. My first need is a killer camera as I’m a blogger in the media. The camera Mod is based on Hasselblad True Zoom camera hardware and has the following features: 10x optical zoom, xenon flash, RAW format and easy sharing. My next need is sound. When I host a phone call on speaker, I need quality and volume (both missing on my Nokia 1020). The sound Mod (JBL SoundBoost) for the Moto Z uses JBL sound technology plus adds a ten hour battery boost. Imagine both a boom box and the world’s best speakerphone on a mobile phone! There is also an InstaShare projector Mod that blew my mind. You attach it and you can illuminate a 70-inch screen, even in a light room, to display a PowerPoint deck or watching streaming entertainment such as a football game.

Take a Look
At the Lenovo Accelerate 2017 conference in Orlando last month, I walked the trade show floor and got a look at the Moto Z and its mods. I shot a vid here of the experience and I highly recommend you look at it.

Drawback
Right now the Moto Z is only available with Verizon. Small problem in that I use AT&T. I was educated that you can use an unlocked version of the Moto Z with AT&T. However I don’t like using unlocked phones because of support issues. (I had a family member use an unlocked BlackBerry Z90 that was programmed for Sprint that I “opened” using Unlock River. It allowed the BlackBerry Z90 to use an AT&T sim card but it downgraded the AT&T network coverage to 2G. A bit later, AT&T terminated its 2G network and rendered the unlocked BlackBerry Z90 useless. But I digress. I don’t like unlocked phones however Lenovo reports that the AT&T version of the Moto Z phone will be out mid-year 2017. At that time, I’ll seriously consider the Moto Z.

Next steps
Over the next several weeks, I’m gonna find a way to demo the Moto Z for two reasons. One is to provide an update to you, the SMB Nation reader. The second is to see if the Moto Z is indeed the phone for me when the AT&T compliant version releases later this year. Standby. 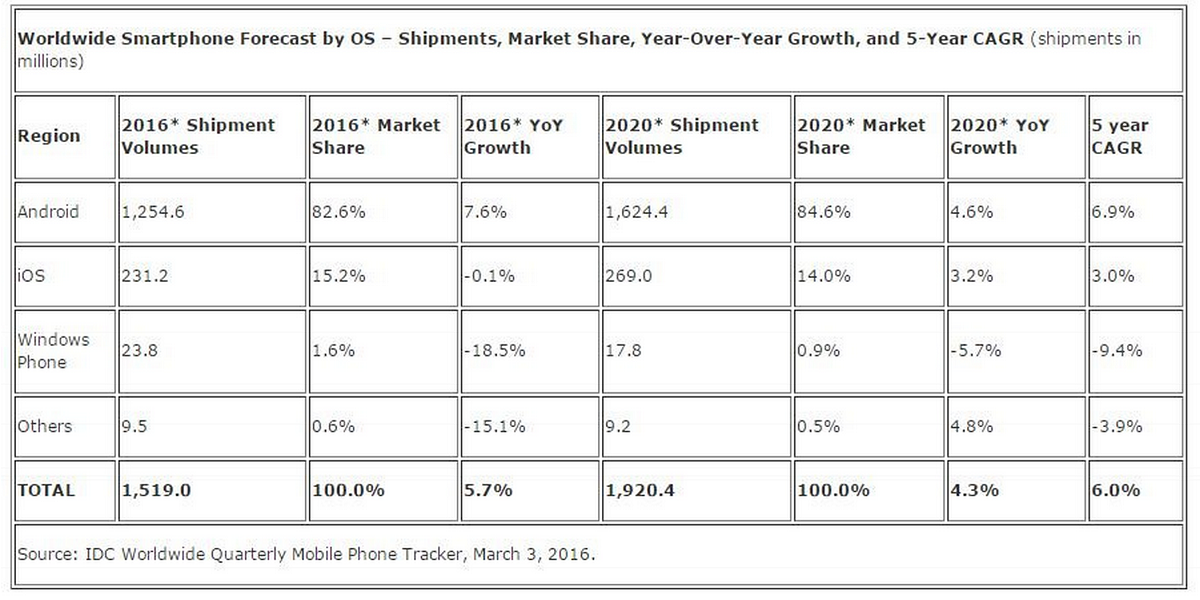 The IDC has always been somewhat optimistic about the future of Windows Phone, but after repeatedly missing predictions by a wide margin the IDC has finally given up on the OS.

The analyst company predicted in December last year that Microsoft would sell 31.3 million Windows Phones in 2015, and 43.6 million by 2019.  Unfortunately Microsoft missed even this modest target, hitting only 27.3 million sales in 2015.

As recently as May 2015 IDC still predicted Microsoft would sell more than 100 million Windows Phones by 2019, but now the company has revised its predictions downwards sharply to what is seen above.