Everyone loves a success story. So hang on fast as Atera, a seasoned start-up, is making fast moves in the SMB channel. You’ll recall we extensively covered it’s “Hello 2016” launch at the start of the year. There is ample evidence suggesting nine out of ten start-ups fail (of course) but I’m more interested in learning what makes the ten percent successful like this Forbes article did. Needless to say I count Atera in this top ten percent. So what’s it’s secret to success as an all-in-one SMB RMM/PSA/Remote Access ISV?

First – the word is out. Atera has enjoyed outsized publicity and coverage because of its market timing to provide a right-sized all-in-one RMM Software, PSA and Remote access SaaS solution for the SMB channel partner. “Our target market are the smaller VARs and MSPs.” Gil Pekelman, Atera CEO, shared during a far reaching interview.

“Our pricing model of $89 per technician is both a fraction of the cost of an existing RMM player (not to mention PSA) and the fact that it is not Agent based pricing makes it totally disruptive.” As a privately-held company, Atera doesn’t release financial information but I can attest that its growth rate is significantly ahead of plan, having reviewed some internal information.

Second – Continuous Innovation. “We launched The Benchmark: This is an industry first – utilizing big data analysis we provide our users with Data (KPI’s) that can guide them if its business is on the right track. For example, we just released within our new billing module a comparison between the contracts the MSP has with his customer and the industry median hourly price.” Pekelman added. In a future contribution about Atera’s SMB channel journey, I will dig much deeper into the analytics topic.

Third – Community Feedback. A day doesn’t pass where I’m not promoting the authenticity of the SMB Nation community based on our geek roots dating back to the beginning of time (the release of the Small Business Server product in the late 1990s). Money and time haven’t changed us as we remain a bona fide grass roots community still committed to changing the world. Here’s the good news. Atera thinks like us too! Pekelman proudly “peacocked” his open feedback approach. “It’s an open/transparent/Internet model – You know what we have, what you will pay and what we are working one…. http://ideas.atera.com/?sort=popular” Loosely translated, Pekelman is saying that Atera’s innovation is based on community feedback.

This transparent community paradigm has allowed Atera to gleam insights into its VAR/MSP customers. “For the small guy what did we do? We changed his life.” Pekelman declared. “He can now afford an all-in-one MSP Software platform (or save a lot of money on the system he has). The system is so easy and automated that he can actually use it without hiring PSA/RMM implementation consultants. He has a unique Offering – Unlimited Agents vs. all those MSPs that are stilling using an agent based product. We are giving him a compass to run his business and guide him to a healthy one.”

Finally – design. I can attest to the simplicity of the Atera solution. I reviewed that aspect earlier this year .

Over the next couple of months, I’ll continue to track Atera’s success. It’s one to watch.

PS – If you downloaded and used Atera in a trial several months ago, DO IT AGAIN! It’s rate of innovation is amazing so the version you worked with a few months ago is different today!

Many readers enjoy the “Fastest two minutes in sports” as a regular segment on SportsCenter at ESPN. Some of you enjoy the weekly highlights at halftime on Monday Night Football. So fasten your seat belts. In the ten minute video that accompanies this blog, you will discover the most important features of Atera, a spunky start-up that aims to make a splash in the SMB partner community.

Atera’s main asset is that it is based on per technician pricing. This contrasts with the legacy PSA and RMM providers who typically charge on a per device basis. This effectively and dramatically lowers MSPs costs – a critical “thing” as our community pivots from big iron to born-in-the-cloud. Atera’s other value proposition is that it is very good at being an efficient solution that provides the functionality you want and need. It’ll never be confused with bloatware!

In the review, you’ll see that I start with the core functionality of the Atera product. There is a very important reason for this. The set-up process is fairly traditional and would have significantly extended the time of the video. In a YouTube world, less is more.

You can anticipate the following nuggets in this review:

Bottom line: View the video and then sign-up for the 30-day Atera trial here.

Wonder how you measure up? Here is your chance to both provide community data and then discover the results in a future blog. Think of it as training data for a BIG DATA experiment in SMB. You can participate confidentially and contribute to the data set. The more participants we have, the greater the value of the data. Again, we’ll happily share the results with you.

Thank you in advance and participate in the survey here: https://www.surveymonkey.com/r/salary2016

We appreciate the generous support of Atera (www.atera.com) in underwriting this community survey. 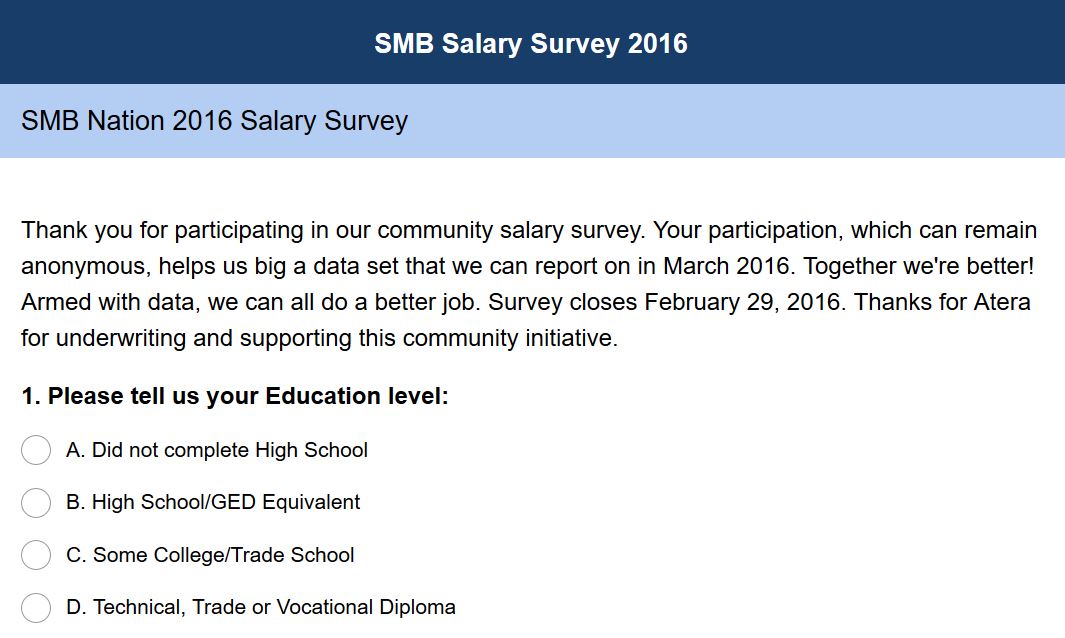 Once in a great while, disruptive financial models are created. Take derivate trading in the financial markets and how that led to high speed trading an amazing disruption. Atera is out to do the same by essentially offering a futures contract where you lock in your PSA/RMM pricing based on the number of technicians you employ, not the number of device. It’s a brilliant strategy and makes sense with the commoditization of IT at SMB customer sites.

If you avoid Atera’s attractive pricing offer, you do so at your own peril. That’s because you subjective you and your family’s financial welfare to the diminishing returns of IT management. Allow me to assert my argument.

Atera to the rescue: per technician pricing

So I’ve saved the best for last. Atera is asserting an optimistic investment approach that reduces risk and increase profitability with maybe a bit of fun thrown in. Atera’s PSA and RMM solution has three pillars. 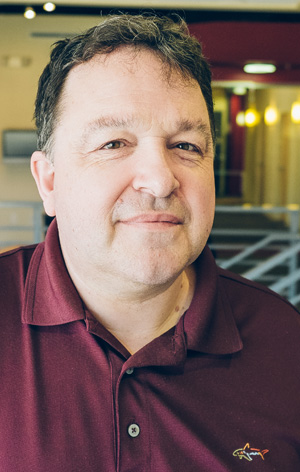 Mark Cattini, president and CEO of East Greenbush, N.Y.-based Autotask Corp., kicked off his keynote address at the Autotask Community Live conference in Miami this morning with the news that the professional services automation (PSA) vendor is being acquired by Vista Equity Partners, a private equity firm.

The future ownership of the market’s leading PSA vendor has been a popular topic of speculation for months, with most industry experts betting on the company being picked up by an RMM player. Such a move would have been logical given the evolution of the RMM/PSA space over the past few years – including the marriage of LabTech to ConnectWise and the acquisitions of N-Able by SolarWinds, Level Platforms by AVG and Kaseya by an equity group.

The financial terms of the deal, which is expected to close later this summer, were not disclosed however Cattini did say that Autotask will continue to operate as a private company.

“We are still private and still independent,” he said, adding that remaining so will allow Autotask to “continue our mission of delivering smart IT to you. If you liked Autotask version one, you will love Autotask version two.”

He then said users could expect to see an accelerated product roadmap and increased innovation leading to “a bigger and better Autotask.”

With Cattani at the helm, Autotask has aggressively expanded its market reach, recruiting more partners in North America and opening sales offices in Chicago, Beijing, London, Munich and Sydney, Australia. All this despite the fact that many industry reports suggest the managed services market is cooling off with growth projections falling off.

In a prepared statement, Cattani spoke about accelerating the value Autotask delivers. “We are devoted to our clients’ ongoing success and are confident that our partnership with Vista will drive innovation and growth and deliver dynamic solutions as the traditional IT landscape evolves.”

“Autotask has a long history of dedicating itself to customer-centric solutions and has built a strong foundation for sustained, long-term growth,” said Alan Cline, Principal at Vista Equity Partners in the sme statement. “We are very pleased to be working with the Autotask team to expand and enhance the company’s solutions to help IT service providers more efficiently and effectively meet their clients’ changing needs.”

N-able Launches ‘How To’ Biz Playbook on MSP Revenue Strategies

N-able by SolarWinds has launched what is reportedly the industry's first MSP Playbook, which delivers best practices and step-by-step business and technology guidelines to MSPs worldwide. Designed as an end-to-end business plan, the new MSP Playbook is valued at more than $50,000 and provides new and established MSPs with the checks and balances needed to build and maintain a successful managed services practice.

We heard from N-able today that the recently acquired RMM has launched Report Manager 4.1, designed to deliver business reporting to N-able MSPs worldwide. Highlighting the new release is a new executive summary report designed to transform and simplify the way MSPs quantify, communicate and visually demonstrate the business and technical value of their services to customers, prospects and other influencers such as line of business owners and board of directors.

Born in the cloud, Autotask continues to articulate a surprisingly clear cloud strategy. That was my take having dissected Autotask from top to bottom this week at its Fifth Annual Autotask Community Live! event in Scottsdale, AZ. Top cloud takeaways that are of a concern to both MSPs and SBSers are noted below.

N-able Technologies has made available N- central 9.1, an IT services platform that easily scales and supports hybrid IT environments and mobile devices, as well as Windows 8 and Windows Server 2012.

LabTech Software, which touts itself as the only RMM platform developed by an MSP for MSPs, today unveiled an integration platform revolutionizing partners’ ability to best unlock the full potential of their PSA platform for increased productivity, optimized customer service levels and maximized profitability.