I’ve had this blog written in my mind for months. I’ve just been trying to find the words to articulate my vision of animal behavior as the best way to explain “machine learning.” So what motivated me to type this out? I read an article in the New York Times this week here about artificial intelligence (AI) and how animals are helping with machine learning.

My study was based on the SMB Nation mascot,

Astro, an English Springer Spaniel who hunts. Hunts food that is. But his hunting to spring birds on Bainbridge Island is for pleasure only (and its instinctual). He has quickly learned via nurture and from over 15,000 years of canine domestication (nature) that its far easier to beg for food from humans. Astro uses a charm offensive much like an infant to get what he wants - food - from humans. Loosely translated to machine learning, think of it this way. Animals are very good at detecting what works and doesn’t work. Begging works.

Old Dog, New Tricks
Animals such as dogs are creatures of habit. Normally they repeat routines such as awaiting kids at 4pm when the yellow school 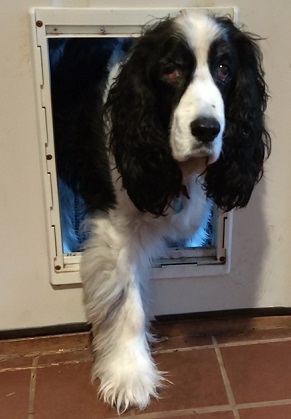 bus pulls up to unload. And Astro isn’t getting any younger, so I embarked on a mission to teach an old dog new tricks! The task was to teach Astro to go through the doggy door to the home office. It was harder than I thought as the see-through plastic flap appeared to be a barrier to entry. So, like AI, I modified the approach to find a tactic that worked. With food being a primary canine motivator, I’d place a dog treat inside my office and Astro could see through the plastic shield and nudge his nose to open the “doggy door” to enter. The downside was that Astro would only open the doggy door if there was a dog treat on the other side because that’s exactly what I trained him to do.

So back to the basic axiom of machine learning and AI: modify and try again.

I removed the actual see-through doggy door under the auspicious that I’d first get him to go through the cutout hole unimpeded then I could reintroduce the true doggy door. See Figure 1 below as evidence that this worked. Now Astro comes in-and-out of my office at will. And this is the current state of my animal learning experiment. The downside to the current state – with the doggy door removed is that my office is colder and yesterday a song bird flew into the office. Had to shoo the bird out with a fly swatter. All good.

Parallels
Machine Learning/AI and animal learning are analogous. Don’t believe me? Try it yourself at home. Feedback always welcome.