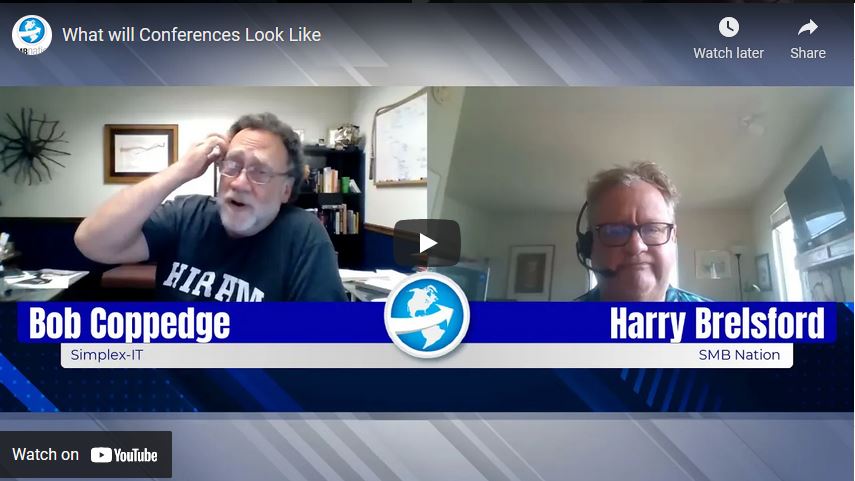 Conferences use to be a place for individuals to come together to exchange ideas, network, and do business in person, however with the Covid-19 pandemic we have seen the conference industry shift.  From in person events to online, and back to in person we have seen conference transform to comply with the ever changing world around it.

We meet up with Bob Coppedge who was able to attend some in person events this summer, as he shares with us his thoughts on in person events, and what he sees happening this fall.

Hey, SMB Nation back with Bob Coppedge one of the most vibrant people in the industry love our love our get togethers.

Hey, I, I'm coming to you today take a little vacation time just because Anchorage, Alaska. Let me tell you it's it's colder than Austin, Texas, that's for darn sure don't leave the door open.

We'll start with the letter A How is that possible?

There we go. Hey, you know, you and I were talking. We for a long time, we couldn't go to events and then we could go to events. And we'll talk later about maybe what's coming up in late 2021 2022. We'll get to that but you caught a Windows and you went to two or three events. And I was able to go to one Retail Now which is the point of sale resellers. So you know we're msps but the same person is overdue and retail caught that in late July felt safe about it felt good. And then you just recently went to the show in the New York City area IT by design.

Now technically, it apparently you can get in trouble with this. It was in Jersey City. Okay. Okay. But yeah, it was it by design the build it conference. Oh, build it. Okay. That's the things yeah. And it was a it was a great conference. And it was the it was held during the week that they had that big storm over in New York. And and literally I was on a on the banks of the river, I'm going to use my lack of geography knowledge horribly. And literally looking at the New York skylight, go dark, the power went out, which is wild. Yeah, it that's, that's a weird thing. And then there was all sorts of flooding and all that and it ended up. I was supposed to have a flight home on that Thursday at seven o'clock in the morning, I instead ended up having to rent a car and drive back to Ohio, Northeast Ohio. And I got back home in Northeast Ohio, about four o'clock Friday morning, four o'clock, five o'clock Friday morning. And you know, I'm literally sitting there in the airport, feeling very sorry for myself, because oh, boohoo, I can't get home, blah, blah, blah. And then I'm sitting here sitting next to this person who's talking to another person and one person is going, my my home flooded, I don't have anywhere to live. And the other one is talking about how they can't get to work because where they work flooded. They don't have a job. And I'm like, I'm trying to feel sorry for myself here people, you know, with these very, very small problems, and you guys have these huge problems. And you're making it very hard for me to feel pity.

honestly, I went there, because because it looked, it looked interesting. And they had a party at the Statue of Liberty, which was, which was really cool. But here's the way they approached it, they approached it with a concept of no selling. So in other words, all of the vendors that were there, and the vendors had the swag, they had the booths and all that kind of fun stuff. But when they presented, they had an edict from the organizers, from the audit by design folks, where they said you can't sell your product, you have to, you have to add value to the attending MSPs. And that value can be a workflow, a best practice, some documentation, some things that don't necessarily they may relate to the vertical or what your product works on. But it can't be about how to best use your product. And that set the tone, I thought it very unusual and cool way. And I will say there's about maybe 200 250 folks MSPs there. And they seemed and I rarely use this term for describing MSPs and includes me, they seem to be more mature MSPs than normally. And what I mean, what I mean by that are MSPs who are more who have it already figured out some of their operations, some of their KPIs, what they do, so they're not and I hate to say this, because it almost sounds kind of sending of condensending, because we all started this way so that they weren't MSPs that were winging it and just trying to figure out that next big thing. Yeah, and that so that was cool. So so not only were the were the webinars, it's webinars. So to remind my that not only were the seminars really engaging on the educational side, but the conversations that happen afterwards, which are usually the best part of every conferences, you will know it were even better because the quality that attended physical conference,

no, I get it and you know, just to to for the listeners in yourself, here's here's where we've kind of played in that, you know, spectrum is that and going back to Early SBS but we were really good with the smaller new computer guys where they were called msps and computer gals. And to your point they were winging it, and they were trying to figure it out. So think of us as the Community College, we had, you know, fairly large numbers. Back in the day, the magazine had 60,000 readers that we did with Microsoft. Right, so we played the community college system. And then our relationship with some of the peer groups is more that that was See there. In my mind's eye that was either undergrad, or more importantly, grad school, it was like grad school for msps to go to http. And so that was that was the ecosystem back in the day, right that we we were kind of feeding the the next level and it sounds like that's where you're saying out and I'll say it starts but that's where this build it kind of starts, right? You're you're saying is a pretty impressive group of MSP. So I get it, I can line it up, man.

And that's, and that's not to say, from a future instance of the conference, that someone who is earlier on, they would not get value from it.

Oh, no. Abs? Absolutely. So. Absolutely. Yeah, I saw great photos. I think I saw one or two of you. I saw your Facebook posts, you know, your were your you were pretty active. Give a sense, and I mean this sincerely, but what's it, you know? Like, sure web does a conference and by design, it's maybe 250 attendees, then you have IT Nation with I don't even know how many anymore, but how many attendees would 1000 or 500? You know, because it's still new times going to shows with COVID.

I would be right now, I would say for this conference, I would say it was probably a year two to 400. Yeah. And I have absolutely no idea where it truly was. But it was not. It was not what I would call nor to try to be it was not the mega show, like application or data con or anything along

those lines. Yeah. Yeah. Well, let's, let's let's talk about the future. Just last week. I memory it serves me right, I think it was Friday is like Friday at 4pm or something Central. It's like, whoa, whoa, datacom, you know, made a good decision. I support them. They made they made a tough decision. So they canceled the Seattle show. I was gonna go and talk to me, you know, were you going to speak at data con? Where you got to go? was I gonna get to see you?

First of all, I was gonna speak there. But I am reasonably sure that is not the reason they canceled it. reasonably reasonably rounding up short. It's it's one where I'll be honest, when I first heard that data, and I absolutely, I support that, Oh, I can't do it. I think it was the right decision. Yeah. But I really thought they were going to catch grief on it.

on the camp, because they were canceling. I really thought. And maybe this is just my perception of the divided country and all that kind of fun stuff. I just thought they were going to be take a lot more grief. And from my perspective, again, kudos to my fellow msps. And I think to a certain degree, even the vendors, just about everybody seems to line up in support of, of data. And this is one of those where, and I hate to speak well of Rob Ray, because you know, but I think Rob has has led such a great team in terms of building up goodwill, throughout this industry, whether you use data stuff or not. So this was a case where people looked at that and said, No, we're with it. We understand we get it. And I'm not sure every vendor could get that. And I hate to say it this way, because it sounds like they tried something, but I'm not sure every vendor would have had that same response. And I have a feeling that I am by myself right now.t I think that datto has built up a great reservoir of goodwill. And this is one of those circumstances where you do something that even the people who say I rather you not have made that decision, are going to say, Well, you've always treated me good. I respect you and I will support you through this. Yeah. Which is great.

Yeah, yeah. And you know, I SMB Nation to the Has has been is in the events business. I talked to people in different sectors of the economy and events business, Bob and bass. And I really do. And basically, we're all doing that we're throwing up our hands, right? We've never gone through this, and especially this wave, and you know, it's it's literally this, what do you what do you do?

It's essentially because I was actually looking at I thought rather seriously at putting on a conference in q4, specifically about developing msps developing co managed it practices, correct. And started looking at places and dates and all of that, and then just it started smelling bad. Yeah, from the standpoint of, of how the world was moving and blah, blah, blah. And I am now glad that I decided not to go. Yeah, yeah. datacom is going virtual. And I think they're going to do everything they can to create as I hate to say, as good of because that's, again, some gaps. But I think they're going to still create a great event. From a content standpoint, they probably will bring me back to speak so it's not all good news, you know.

Make that the final word, my friend. We'll see you next time. Thanks. I'm sorry, I won't see in Seattle. That would have been cool.

Okay, we'll catch each other soon. All right.