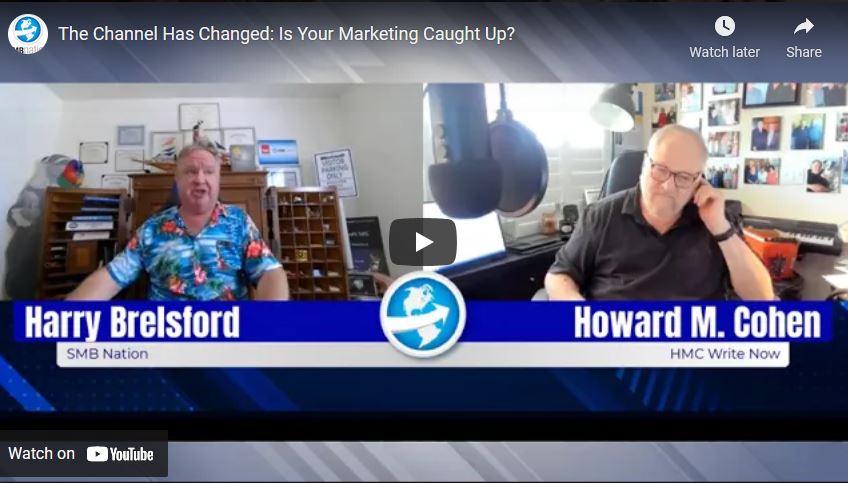 When we look back over the years there have been many changes to technology and the IT channel.  From break/fix to cloud computing, and in between the industry has seen some vast changes.   With all of these changes many MSPs have had to evolve all parts of their business from operations, to sales, and even marketing.

We speak with Howard who takes a deeper look into marketing, and how MSPs are marketing their business.

Hey, SMB Nation. Harry here back with Howard Cohen and Howard. Where are you? Are you in the heat down in Arizona in the dog days of summer?

I am in. Don't take offense get my dogs take offense when people talk about the dog days of summer. I am still in Arizona. I will be here for the rest of my natural life. It is currently 84 degrees here was not hot at all. It's not projected to get over 90. This is a cooling off we I believe we've left the three digit days behind.

Wow, they've just arrived in Texas. It was the coldest summer in 14 years most random 14 years until last weekend. So that's that's why I had to go a little bit of Caribbean shirt on yea. Well, hey, let's get down to business. Some over on Channel Insider, you recently dropped a piece called the channel has changed channel marketing needs to catch up. So what's what are you talking about what's going on?

Well, if you read into that article, within like the first two or three paragraphs, there's a link back to a previous article in which I asked people, are you still calling yourself a reseller? And it's an honest question. I think that it's pretty clear that the day of the reseller is over. Nobody's making a whole Well, that's not true. Every time I say that nobody's making money, reselling products, somebody messaged me back that they know the secret, and they've got the magic, and they're making a ton of money, good for them. And most people don't have it. If they do god bless them, I hope they make a fortune. But for the rest of us poor fools. It's just not possible to make money selling just products anymore. Correct. And most everybody has either successfully or unsuccessfully made the transition to some kind of service provider mostly managed service providers. Yep. Well, marketing professional services is very different from marketing products. It's a completely different approach to completely different animal. And I look at a lot of the, the the outsourced firms that are helping them market. And I don't think anybody's told them yet. Because everything they do to me seems to be very retail very much about you know, product speeds, and feeds and price and availability. And you know that I don't see a lot of in depth discussion about value. Yeah, and managed services are all about what the customer perceives as value. If you're not conveying value, you may win the customer first, because you're pretty smile nice, but then you're not going to keep them. So I wanted to write about the idea that we really shift from retail marketing, to serious professional services marketing. Yeah,

you know, you got me thinking and I just started getting some emails, again, from bar Street. And you may recall, it must have been where were 2021 it was at least 10 years ago, maybe more that Autotask acquired VAR Street and VAR Street, they had this big song and dance at their annual conference in Miami that year. And var Street was to take MSPs. And I'll say white collar MSPs for lack of a better reference, but, you know, run a business provides services and so on and wanted to introduce them to the resale of products. And that's what VAR Street was was basically a marketplace to stand up a little grocery store retail store online, to sell, you know, print printer ink. Okay. And Howard, I was never onboard with the the acquisition, I was never onboard with the we'll call it investment thesis that they were laying out in a keynote. And you know how this goes, he can make the statistics say whatever you want, right? If you're not selling product, you're missing out on this huge opportunity. I was not on board with that. And then I think, if I recall, they actually disposed of VAR street some years later. That's why I'm getting these emails, again, not associated with our tasks. But any any thoughts on that? Maybe you remember that specific use case? Or you have additional thoughts add?

Well, I think that, you know, I remember conversations over the past few years with those who still believed they could make money selling products, and they were telling you they're still making one or two points, and some of them were happy with basis points. And I was like, do you realize that you eat that up in operations? Yeah, um, you know, that's The thing that worries me is that people don't look at the total cost of getting something done. And in the product realm, just operations, eat it up credit eats it up. And there's million things that will eat your profit and be satisfied. One or two points is nuts. So who's going to sell product, I think going forward, clearly, the catalog providers are going to be selling tons of product. But I noticed and this is coming, I'll be coming up with an article very, in the very, very near future, it's just waiting for someone else to make an announcement. But the article speaks about how Microsoft is talking about all these hundreds of 1000s of new partners. They're adding, you know, all the time. And if you speak to the right people there, they make the distinction that they're adding non transacting partners. What is a non transacting partner, that's somebody who's out there doing projects that doesn't have a reseller authorization, and just has their customers buy it somewhere else. That's literally what it is. And if you formalize that a little more great, that's terrific. Basically, what I think Microsoft is saying is that you don't have to sell our products anymore. You just have to drive demand for our products. And we'll be very happy with you. And we'll show you some love and for nothing, but it's not a bad idea. A lot of people are interpreting that as old Microsoft doesn't need the channel anymore. I don't think that's the case. I think Microsoft is changing the role of the channel. Yeah, not worried not making people who are really good technologists be really good operations people. There's nothing served. So yeah, I think that clearly there will be places for people to get their products. And I think a lot of very smart MSPs will make that easy. They'll facilitate that. But I don't think they'll actually do it themselves. If they're, if they're doing it at all. They won't be doing it very much longer.

Yeah, yeah, absolutely. All right. Well, are you you? If you look at your calendar, then I know you're sassy and happy doing the the analyst thing, the the the content thing in your home in the southwest? But are you going to be attending any conferences in the second half of the year Fingers crossed? All things being equal?

Probably, probably, I don't know that I'm going to be presenting at them anymore. Very much. I think that I think that people have accurate expectations those sessions now, which is why there are fewer and fewer people going into them. I do think that there is value in first of all this value and getting to hug you. Yeah. And and other people who, you know, we're all friends with him. Look, the channel is a great, big, enormous family. And so and so, um, you know, I look forward to see my family at those sessions. And yeah, it'll be nice to be able to get up close in person. Again, this is fine videos. Fine. But yeah, you know, until then, smellivision. We need to get together.

Yeah, and I just talked to Ted Hulsy. You might know of Ted over the year Sonicwall and beyond. And he just got back from Denver with the Connect wise peer groups. I still want to say HTG but he said it was great. pent up demand, excitement, enthusiasm, old school, he says great. I said I'm sure it was

you know, the rumor that there are a lot of us in the channel who our sole job is attending conferences. So I don't know if that's true or not. It was certainly never true for me but those people will be getting that could be getting back to work.

Yeah. All right, my friend got bounce