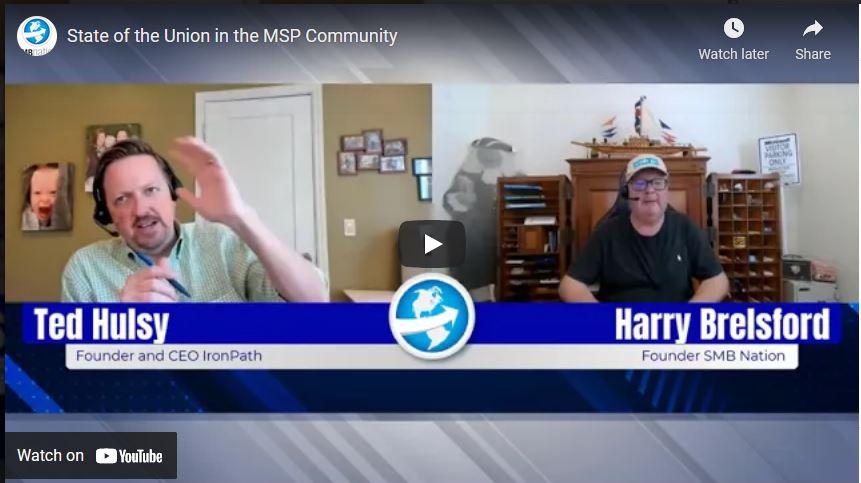 MSPs have spent the last year scrambling to adapt to the ever changing environment around them.  While helping clients get set up to work from home, managing their own offices, and trying to keep everyone around them healthy it has been a year to remember.  With things looking up and many people currently vaccinated 2021 will be the year of transition.

Many companies have become unfroze and many MSPs are signing new deals and winning new clients.  With these positive changes brings pent up demand for more social interaction and networking.  Join us as we speak with Ted Hulsey about the State of the Union in the MSP Community.

Hey Nation Nation back with Ted Hulsy. See how you doing, man? I'm doing well hear you. How about yourself? Good, good. Hey, I have a funny story to tell you. With my recent relocation to Austin and I'm slowly unpacking, you know, just, it's gonna take time but I came across a little clip that said Sonicwall little silver clip. That is just the perfect size to seal when I get the chips, right, the tortilla chips Here we are on Cinco de Mayo. And so that clip if you have like, 10 more of those in your closets, ship them out to me, but that that was a really good CHATZKY. Maybe you recall the thing? Maybe you don't. But it was an oversized. You know, you know what I'm trying to oversized chip clip?

I don't know, you know, the Yeah, I mean, it's great. schwag from the past.

Yeah, exactly. And that's gonna come back. Yeah, I think shows are going to be stronger than ever. That's what we'll talk about that next time. But hey, what's the State of the Union in the MSP community, you're, you're out there talking and we're coming into summer, we're coming into a healthy, or economy and a healthy or society What's going on?

I mean, I think, you know, checkbooks are open, people are enthusiastic and positive, you know, the kind of the attitudes changed in 2021. And it's showing up in just everybody's super busy. Um, things have become unfrozen people who put kind of put things on hold, and 2020 are talking again, and, you know, most of my clients are just seeing a lot of new client additions. And so they're, you know, they're they're signing up new deals or winning new logos. So it's very positive, I think, just a ton of positive energy, and then a lot of stuff with existing clients, projects that got put on hold, things are getting loosened up. And people are spending. That's what I'm seeing.

Yeah, yeah, actually, just yesterday, we had our quarterly meeting, we're still it's kind of like, I think half of the IT Nation of all peer groups did get together in Dallas this week. And then the other half, you know, the other half of the groups, maybe it's only a third, who knows. But my particular group, since we, we had lots of people who weren't going to travel Still, we just decided to stay virtual. So you know, more than half of the groups are still virtual. This quarter. Some people went down to Dallas. But I think probably by q3 in Denver in August, I think everybody hopes to be back together in person for in person meetings.

Yeah, yeah. I concur. I've revised my forecast. You know, a few months ago, on this very podcast series. I was saying q4, you know, and that was the belief, right? The vendors were like, Ah, I'm not getting on a plane till q4. And this is, you know, the dirty little secret of events, at the end of the day is vendors drive the events, but don't tell anybody. Oh, yeah, the economics of it. But it has shifted to q3. And when I say q3, I think what you're gonna see is, July, in large part will be a wash, because there's pent up demand for vacations. And you know, Mama bear wants to go to the water park with the kids and Papa bears got to go, you know, there's, there's a little bit of a backlog of fun. But, you know, you turn the corner getting close to Labor Day, and I think it's gonna be a rocket ship.

You know? Yeah. Yeah, I think there's just tons of pent up demand. I mean, people are hungry for traditional social interaction. I mean, I think that's there's just no doubt, and traditional networking. And I mean, I know, our lunch. The other day, I was talking to a client and, and he was like, when did we ever think two or three years ago that we were going to be saying, Oh, I incredibly miss business travel. And I think everybody is saying that all the time that you just missed the kind of the social engagement and the value of running into people in the hallways of the tradeshow and reconnecting with people in that way. So there's, there's so much serendipity in going to events, and networking. So there's a it's gonna come roaring back big time, I think.

Yeah, and the nature the way I'm wired. And you've known me a long time, but I have a really hard time sitting at a desk all the time. You know what I mean? That's why I saw you so much traveling, loved it. Loved it. Now that said, Ted, and I'll end on this. I'm going to I'm going to revisit how much I travel right because I I've used the pandemic for a little bit of self reflection. And I you know, you've seen me in times rise probably above 50% travel and the perception was almost 100% travel because Facebook but I I don't know, man, I don't know if I can go back to that that much travel. I will travel but I think I'm gonna revisit how much I travel. How about you?

Yeah, I'm in the same boat, I would say. I mean, the The pendulum emotionally I really enjoy shows. And I enjoy being on the road and connecting with people. And I think there's tremendous value there. But yeah, it's an incredible burden just to be away and being on the airplane and you know, your health suffers, because you're probably not eating as well as you should. Yeah, everything else on on the road, you know. So I'm in the same boat in terms of like being more thoughtful and intentional about it and not just being knee jerk about it like, hey, the only way we can get together is by getting on an airplane and seeing each other. So I think the pendulum will swing back, but I think everybody is trying to like dial it in correctly. So that we just don't the pendulum doesn't go all the way to the other end of the extreme. And we're back to where we were three or four years ago, where we're like, why am I traveling so much? This is a pain. So I think there's a right medium, or there's a right, happy medium. And we of course have all these wonderful tools now that are broadly adopted, and really have transformed how people are working. So yeah, we're not going to go back to the same, but we do want to get back to doing some trade shows for sure.

Yeah, absolutely are my friend will talk to you next quarter. Thanks for being one of our analysts, man.