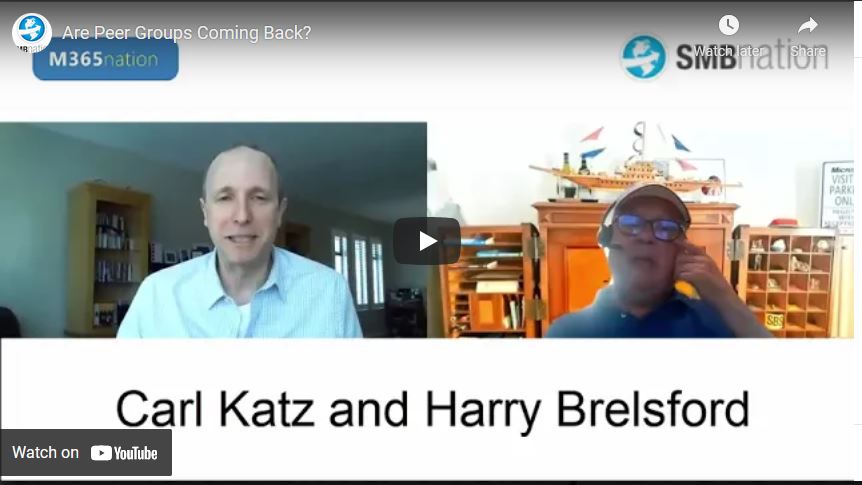 For most of us 2020 was tough, not only personally but professionally as well.  With many businesses working from home, and making daily changing decisions about their business, it took a toll on many owners and CEO’s.    Although 2020 came with it’s challenges 2021 is looking better.

Have you ever thought about joining a peer group?  2021 may be the perfect time to join a peer group and have access to a network of likeminded business owners. Whether it’s the guidance and wisdom of a more experienced business owner, sharing of problems and solutions, or simply having access to a collection of fellow business leaders peer groups can be critical to helping rebuild and growing  in 2021.  Carl Katz joins us to share his new peer group.

Hey, Nation Nation, back with Carl Katz going around the horn. It's q2 Welcome to q2, my friend. Hopefully life's getting better for all of us. I'll just leave that hanging out there. How are you doing? Great. How are you? Very good. Good. So you have some exciting developments. You started a peer group up in Vancouver, BC area Go, man, what's up?

So yeah, you know, I did this on the phone like 2011 2012. And we had four or five of us, we found that immensely valuable. And I've got a whole new circle of, you know, it colleagues. And we all kind of copy each other on security stuff, and all this stuff that comes out. And I thought, you know, peer group would be great. It was great in the past. So, you know, I took on calling all the guys together scheduling a meeting, that kind of thing. We had our first meeting. You know, there were a few topics discussed. I think one of the more prominent ones was security, IT security and the changes in the past year. You know, with cybercrime being up 600%. So yeah.

That's, that's cool. So let me let me get this straight. This is from your circle of it friends that you already know, in the area?

Well, believe it or not, I mean, I met a lot of them. I've never met some of them face to face. But there's contact between, you know, four or five of them. So So yeah.

And what were the mechanics to starting this? Didyou go to meetup.com? And put yourself out there or Facebook event? Or I'm curious how you got momentum?

Well, we were kind of see seeing each other on, you know, security incidents and vulnerabilities and all this kind of stuff. And I thought, Hey, you know, why don't we start a peer group? So they were already there, you know, it was kind of organic. And I sent out the invitation, and everybody said, Yeah, you know, please. So you know, it's once a month, basically. Now, at this point, it's once a month. Yeah, we had it coming up.

Yeah. And I think that's all it can be, you know, today's peer group is yesterday's user group meeting, right back in the day when user groups were a thing. And now it's the peer group. But it's the same type of interaction. And I think, once a month is appropriate, a month goes by really quick. I'm writing a new column for a Seattle publisher, it's a monthly column. And Carl, it's always sneaking up on me. Yeah. Oh, for sure.

yeah, it is. And that's, that's good that you're trying that out. Because this, you know, in the private sector, in the corporate world, it's called over 50 and fired. They don't honor that experience, for sure. Hey, finally. So will the topics be a wide range of topics? I mean, can it be everything from the emotional entrepreneur to business, speak to geek speak, you know, you're going to cover the whole, I call it the whole life cycle, the whole landscape,

you know, I like to do that. I mean, that's, that's the idea. You know, the topics, anybody can email and suggest a topic and they're gonna think, but I was just thinking this morning that, ya know, I'd like to cover off more than, you know, more than tech issues and and, and those kind of concerns for sure.

Yeah, cuz that's what I've seen in the industry peer groups. Take HTG Now, what does thatConnectwise Evolved but you know, one of the early peer groups that was commercialized and they covered a lifestyle conversations business conversations, where they're sort of main thing you know how to charge how to bill how to collect inevitably the you get a roomful of geeks, inevitably it's going to go geek on you at some point. But that wasn't really their reason for being because there's a lot of other forums out there. So Well, I'll tell you what, Got it. Got a run. appreciate you sticking with us. And we'll we'll catch you on the flip side, man, a very, very valuable contributions. Thank you, sir.