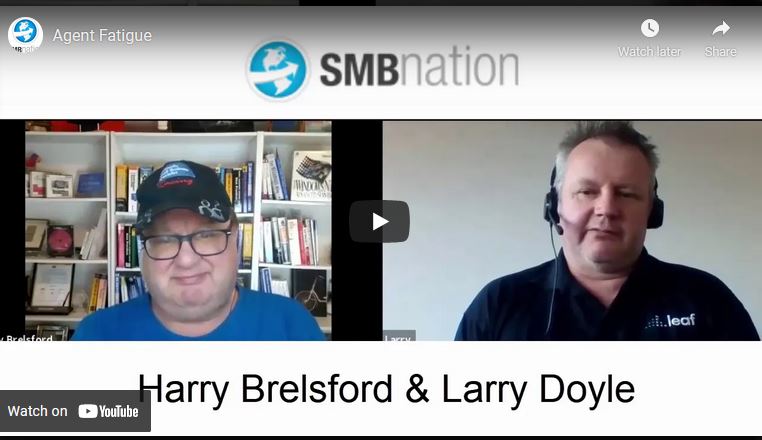 We almost hear daily about data breaches that expose sensitive information about businesses and people.  These breaches and attacks are costing companies not only a lot of money, but time and their reputations.  In attempt to win against these cyber attacks many companies are using layers of security and remote management to access their information.

Many companies have RMM monitoring tools, disk encryption management, antivirus, anti-spam, privilege elevation control, and boatloads of agents to maintain these updates.  With everything having to be deployed out to machines, it’s getting to be a bit to much.  Join Larry and Harry as they suggest moving away from the point products, and moving to multi-functional Swiss Army Knife type tools.

A Nation Nation back with Larry Doyle back out there across the pond in Dublin, Ireland, Larry, how you doing?

Hi, Harry. All right here. All right, I think some snow later this week.

Yeah, that's that time of year, hey, you came up with a really cool term I want to double click out into called agent fatigue. What is agent fatigue?

I suppose it's, it's really it's deploying all the endpoints and the different layers of security and remote management and access and all the good stuff that we have. So we've got, like your RMM monitoring tool, you've got disk encryption management, you've got antivirus, anti spam, you've privilege elevation control, all these other things like an application whitelisting, such as only different products, like in the old require an agent. And it just, we're getting to the point now where you know, everything has to be deployed out to machines, and it's just gotten a bit too much. And really, you're gonna have to try and focus on getting a product that's that those more than just one. So moving away from the point products, I can just start from moving to multi-functional Swiss Army Knife type tools. You know, I suppose, like Bitdefender, Sophos are good examples like quarter, they're adding in a little bit of whitelisting. And they're doing to disk management, disk encryption management. All in one, agent. Even though, you know, you might with the likes of say tread locker, which is specifically focused towards application control application whitelisting are much better than person, you know, it's just enough to have it in just one products like,

yeah, are you seeing with all these agents, system performance degradation?

Not really. Like there's there's there isn't stuff years ago, like you remember like that there was there was different cybersecurity tools, we'll be fighting with each other over control. But there's much less of that. Now these days for them. It's more about, like, all these different portals you have to manage, and like really moving away from the single pane of glass type. Yeah, endpoint management. And then it's just a matter of coming up with some kind of solution to deploy all these agents.

Yeah, yeah, exactly. The final question would be system stability. And maybe the answer once again, is now that you've kind of answered it, I was thinking more in terms of performance. But now I'm asking about stability. Any stability issues with all these agents? It's not your must answered it last

thought like there, there isn't really, they do tend to live alongside each other much better now than they used to. I would use Sophos to yourself as a last second and I'd have intercept x alongside say Cisco umbrella for DNS filtering. And they seem to work really well together.

All right. Well, I love it. You've coined a new term, ancient fatigue. I like it. Hey, final question. Are you going to get out as we head into warmer weather? In the near future? You got to get out of the motorcycle you got a trip planned again?

Well, I had I've loved the trips plan for whatever we can get off the island or not is a different story. So I know I won't trip in within Ireland. As soon as they lift the level five lockdown. I'll be able to get outside my own County. Porsche. Yeah, I was fine. I'm going to Europe and doing a big tour and later on in the year. We'll have to wait and see how the vaccines and restrictions and all that kind of stuff go?

You sure do. All right. My friend will talk to you next time. Thanks, Larry.