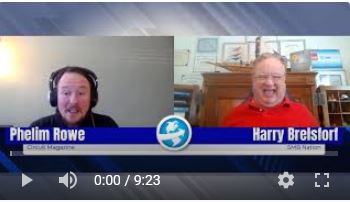 During the pandemic many things have changed from working, to engaging with people and even events.  With so many changes it is inevitable that events evolve as well.  From in person to virtual events,  conference leaders have developed a hybrid event model which is a tradeshow, conference, unconference, seminar, workshop or other meeting that combines a "live" in-person

with a "virtual" online component.   Join Phelim as he shares with us the first in person event he has attended in almost a year.

Harry Brelsford 0:02
Nation Nations back with Phelim Rowe. So, Hey, man, thanks for keeping with us in 2021. Appreciate your insights and wisdom as we were all in this together, man.

Phelim Rowe 0:13
No, it's good. I feel I feel included. I feel welcome. And I think that's important in this virtual world.

Harry Brelsford 0:19
Yeah, yeah, no, absolutely. The the ecosystem, right the the networking that we do. So folks will remember Phelim, as a security expert. And you recently did an event in Dubai, a physical event, and you want to talk about hybrid events and looking into the future don't man,

Phelim Rowe 0:40
I did. And a big disclaimer, I see a lot in the security world, I don't want to frame myself as an expert in security. Just just I'm a friend of the community that sees a lot of stuff. I do a lot of events. And so events plus security, I think I've seen a beautiful vision of what could be and what could be I ran a physical event, subcontracted to Dubai World Trade Center in December. And even though it was you know, pandemic time, we did it socially distanced, very, very big amount of floor space to achieve that. We all were in our masks. We're all doing our PPE. And we made a great cyber event. It was also the first time we've had the Israel UAE summit. So so that was a whole new political thing going on. Yeah. But I guess the message I'm bringing is that we also did hybrid events, where we would bring Australian panelists or American panelists that couldn't fly in, and we'd have local panelists below them. And maybe, yeah, the first one was a bit awkward. But it can work. You know, I've seen it done before you get like Edward Snowden piped in because no way he can travel. Right. Yeah. And, and, and, and I think that was the exception. But But I think now we'll say, Yeah, I want Harry to come to my London event. But Harry's a bit busy. Let's pipe him in. I think it's possible.

Harry Brelsford 2:12
Yeah, I do, too, I think we're gonna find balance. And the notion is, obviously, we've all you know, gone zooming during the pandemic, and that is what it is. And I personally, what the physical events to return that's kind of, that's kind of where I work best, right? hallway 101 kind of the nature of my personality. I'm not even a very good student fellow, I don't go to that many lectures when I'm brought in as an analyst. And the reason is, is you know, as an analyst, you're often shepherded around to different interviews and rooms, and I may or may not use the actual product, but I really enjoy hallway one on one, I want to get back to that. But there's also a reality that if the event is of extreme interest to me, right, like, maybe it's outside SMB, in some of my extracurricular activities, where I'm investing my time not necessarily my money, some other startups in that particular industry may not have the time or the ability to fly to the city for the event, but I will sit in my chair, if, if, if it's compelling. So I think it does broaden the reach. And I think, you know, Phelim, I think people are looking in the mirror. And asking about, you know, why was I I certainly have, like, why was I going to two events a month, you know, as an analyst, you know what, cuz tell them that takes you out for about five days. I don't, I don't care who you are. But it's, you know, you got to fly, you got to go to the events, typically a multi day event, then, you know, you got to come home, but your your out of pocket, no matter what they said,

Phelim Rowe 3:55
You know, I talk, but you can also make the same sort of conversations and connections virtually. But then it'd be nice to follow up physically. So maybe maybe people have to add more to their event. You know, I know you guys do like having golf weekends. But it's got to be something more.

Harry Brelsford 4:14
Yeah, yeah. And on the social distancing thing, Jenny and I, last week, went into Seattle, and looked at some event venues, we've been hired by a client to act as an event manager, basically, in q4 this year, totally different industry. And it was really interesting to go to some of the hotels in kind of balance out with Governor Jay Inslee, his initiatives are today about gatherings and how far apart to your point, you know, it was a huge you're talking about a huge space with few people. versus what will that look like in q4 of this year with the vaccine rollout and I'm assuming the governor will will look loosen up the restrictions, you know, right right now, it's pretty tight here in Seattle, it'd be hard to have a proper event. Let me tell you. And I'm assuming the UK with your lockdown even more so.

Phelim Rowe 5:15
Yeah, you get you'd get arrested and get a very large fine. Yeah, you know, but it's not it like in this lockdown we've kind of learned from the first one in the first one I think, you know, even the law enforcement, you know, community was reading the new law that just been written really quickly and gone. Okay, what, what are we supposed to be doing? So some people got arrested for sitting on the grass. You know, some people got arrested for spending too long talking to someone from across the road, you know, silly things like that. I think we've ironed that out. And as you say, you know, it's a great point. And I I'd love to be looking at venues now. I'd love to be in your shoes. I think it's it's promising. But also and I know we both have both of us believe content is king and the MSP community has maybe been treated to some events where content wasn't king so much. Yeah. Maybe on top experience is also king or queen.

Harry Brelsford 6:11
Yeah, that's what I've concluded. Now that's what I've concluded an event is an experience. I had let's talk to a an event management company that did very large concerts, music events and Seattle ones called bumbershoot. And what did he call it he sent an event is a spectacle. it you know, and it rhymes with festival but but that was his view of the world. Now admittedly, he was being a seed, right putting on music events. But that's what he woke up in the morning thinking is an event is a spectacle. And people want to be entertained and I would offer our industry need we need some of that it needs to be entertaining to engage you.

Phelim Rowe 6:56
When we first met where we first met in Miami. That event that was entertaining. I I enjoyed it. I enjoyed the breakfast in the morning with the beautiful view. I didn't join in in the football lessons because it was a bit early for me. But you know, it's like that, you know that that that's got to be where we're going?

Harry Brelsford 7:14
Yeah, exactly. All right, sir. We'll see you next month. Thank you for being one of our analysts.