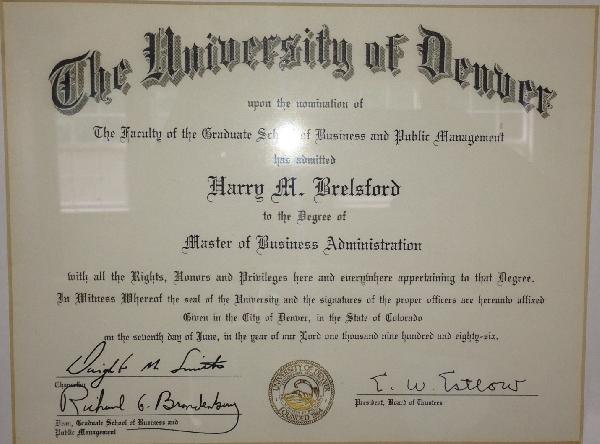 Long-time SMB Nation friend Matt Landis, a Microsoft MVP in the Lync telecom/UC area, posted up the results of an informal survey about

higher education and the computer guy. The results are disturbing and warrant further analysis. When asked about graduate school, his IT experts universally replied NO THANKS! You can read his original work here.

I disagree. Consider the following...

Lifetime earnings. It’s irrefutable that there is a high positive correlation between education and income. Short of being born into an upper caste, the single-greatest thing you can do is to attain the highest level of education possible. Your paycheck is your reward.

Success Ladder. In the SMB channel, it’s common to watch someone from the “other side of the tracks” go from zero to hero because of hard work. That includes long hours at work, but also participating in educational opportunities. I look at many friends who have immigrated to the Seattle area from India to go on and financially leap frog the tired old guys in the Puget Sound Small Business Server (PSSBS) user group run by the acclaimed Steven Banks, a Microsoft MVP in the SMB server area(s). God Bless America, that we live in a country where educational opportunities, like voting, are at least available to all. It’s a privilege, and I’m saddened to see so many IT Pros respond negatively to Landis’ poll.

Balance. As one becomes more senior in their professional career, you typically exhibit a higher level of people skills, have enhanced likability and are conversant in broader strategic conversations. Heck, you might even develop a thoughtful philosophy of life that you articulate and share with others. I’ll stretch even further, the higher the education level, the greater the propensity to “send the elevator back down” and mentor someone. Why? Because it’s likely a teacher, perhaps in graduate school, contributed to your success, and you are honor bound to pay it back.

Family History. For the first time ever, I’ll reveal to you that there has never been a Brelsford in the past 100+ years that didn’t have a Master’s degree or higher. I earned my MBA from the University of Denver in the mid-1980s, and I adored the experience working with early computers such as C/PM machines, Apple II+, a VAX and the Macintosh.

Folks ask about my family (including my own mom), which has produced countless lawyers and PhDs in numerous fields. Mom’s second advanced degree was in Theology from the University of California Berkeley. She was one of the first women to be ordained as an Episcopalian minister in the early 1980s and led protests against President Reagan’s war policy in Nicaragua. Educated minds will recall this was the Iran Contra scandal that funded the Nicaraguan Contras. You can read the full story about that important part of American history here. But what do I know – I only have a Master’s degree!

Obituary. What I like about earning a Master’s is that they can’t take it away from you. You can lose your assets to bankruptcy, but they can’t foreclose on your sheepskin! That comforts me at night as an IT Pro doing the work of the technology Jesus. But another twist is this: It saddens me greatly to watch many of our anti-education IT Pros dying in the vine in the ever-changing, fast-moving field of technology.

We have the Pocket MBA offer as one of our products at SMB Nation (visit mypocketmba.com to learn more), and it always amazes me when IT Pros reject our graduate-level, 12-weeks certificate. The first objection is: “What do I get?” and our reply, after conveying the knowledge value equation, is: “We’ll throw in a T-shirt.”

Attitudes. Be the life-learner. Some people just love to learn. I do. I’m sorry if that will offend many in the Landis’ poll. I truly enjoyed my MBA business classes as a chance to grow beyond “Geek.” In fact, my friend, Tracy Anna Bader, who just completed her Masters of Fine Arts (MFA) at UMASS-Dartmouth as a senior professional, said that she went for her MFA motivated not by money, but rather because she wanted to accomplish a personal, life-long goal. Congrats, and you go Grrl!!!!

Free advice. Reboot and revisit the idea of earning an advanced degree with an open mind and heart. There are many educational alternatives such as capable online education that suggest you can keep your day job while bettering yourself both personally and professionally. And to the rest of you reading this who don’t believe me…well then, sorry, but I'm just going to have to agree to disagree with you!