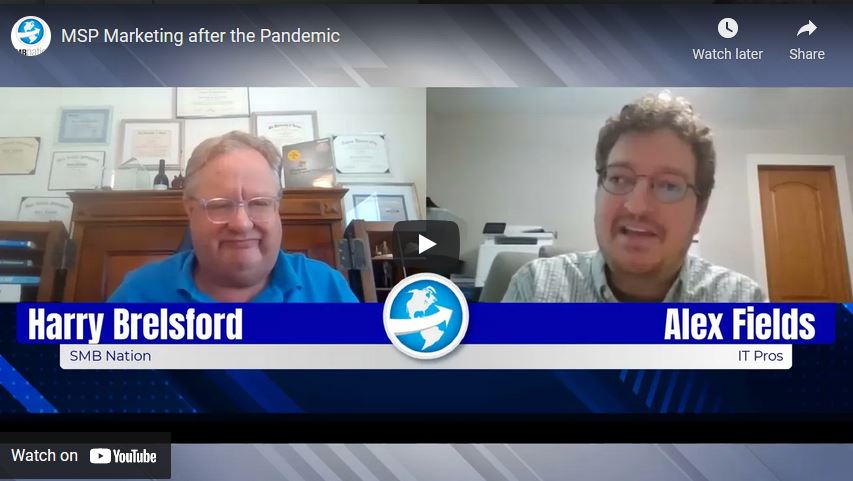 Marketing during the pandemic was a shift for many businesses, as we went from in person handshakes to digital marketing and communication.  With these fluctuations it probably comes to no surprise that consumer behavior shifted during the pandemic, with businesses shutting their doors, and face to face interactions becoming nearly nonexistent.  Now that the world is opening up many businesses are looking back at the long term implications of the pandemic in terms of how they market themselves.

Harry Brelsford of SMB Nation sits down with Alex Fields of IT Pro, as he shares some of his secrets for marketing after the pandemic.

Hey nation nation back with Alex field Salix the traveling man, where are you today? Where will you be tomorrow?

I'm back in Nebraska temporarily here. But we may last week living in Nebraska, as we close very soon on a new house in Missouri. So that will be my new home base, I might be moving around a little bit less from there. But partly why I chose Missouri ultimately was because it's just so centrally located the United States that I can pretty much get anywhere from there. So anyway, we are looking forward to moving into our new home soon. And and having a new, you know, base of operation.

Yeah. Let's talk in this P marketing. They said you've been in conversations with MSPs. Talk to me what's going on? Yeah, well,

you know, you know, during the, you know, during the last couple years, the pandemic, most people have moved to more of, you know, online only type presence and stuff. And we're starting to get back out there in the world. And, you know, get back to the old ways of doing business. In some cases, some cases are still a lot of people doing like work from home type scenarios. But it's kind of funny, because everyone thought that this was I mean, it changed a lot of how we work with a lot more people working in teams and things like that. And then when it came to marketing, like, I feel like, we got dumber somehow, like, I don't know, like, like people thought that the magic bullet would be, you know, simple, obviously, we have to transform digitally in the marketing space to and I think to some extent, you know, there's definitely room for, you know, improvement there, there's things that you can explore. But I just was consulting with an MSP recently, who was really just telling me a sob story about how they had invested in this, like outside marketing consultancy firm who came in and help them with their digital marketing efforts, and social media accounts and stuff like that. And they spent a bunch of money and they didn't really see much return for it. And, you know, my, my immediate comment, of course, I can just sit back and be the critic, I'm not doing any of the work for them. I'm just like, another person, they're talking to you. But I just said, Look, you know, relationships aren't built through algorithms, right? Like, that's not, that's not ever going to be really that effective. If you're just hoping to outsource it and have someone else do your digital marketing, it's not going to really do anything. So when it comes to digital stuff, I would suggest, you know, what's been successful, for me at least is I've never, I've never taken any kind of SEO course, I've never like tried to get into that whole world of like, what do you got to do to like, flip the right switches and get the box and get Google to like, you know, improve your rank, I don't know, I don't, I don't do any of that. I've never, never once have done any of that, the only thing I do is I try to produce material that's valuable to my target market. That's it. And so that seems to be the best, you know, marketing advice that I can offer, just try to be, you know, give your best work away for free, just, like try to make something that speaks to your audience. And, and people find valuable and share that freely as freely as you can, and people will come to you, people will come to you for business. And I think that's, at least from a digital perspective, that's what to do. But I would suggest, you know, since we got out of the habit of being in person, get back out there and pound the pavement, you know, go to, you know, door to door sales, if you have to, but also like in person events, like, people are looking to get back into seeing people again, I think people are really, you know, they miss busy being around others. So, you know, I actually think I'm really looking forward to going to some, you know, technology type events, like more conferences and stuff, I hope that more of those start to get held in person, I think it's going to happen on the smaller scale before it happens that like the big conferences, like Microsoft is still online this year, right? But yeah, soon that will open up to but smaller scale people, we can start, you know, we can start to hold some stuff in person, people or people are excited to go to events like that. And so yeah, that's what I would suggest is, you know, make, you know, make an event, have it, have some lunch and learns, you know, host some people, you know, throw a pizza party, whatever. I think those are great, great ways to get kind of back into the marketing swing, as we, you know, the world opens back up here. So, yeah,

yeah, and you're right about, you know, maybe being too heavy and digital. Now, there's a time and a place for large corporate entities to have a digital presence with branding and stuff. So, you know, trek bicycles, for example. There's a time and a place but but the lately I've been growing in my other startup, by referrals, and that's really fun. And I'm in a sector, the economy that's growing very quick in the cannabis technology space. But it's, it's interesting, you know, not not that we were devoid of referrals at SMB Nation, but that was a behavior more in the 2000s. That was early in our world of Small Business Server and my company, lot of growth by referrals. And then and then we kind of captured everybody and we did what we did and you know, then the product went away, quite frankly. So fact I'll end on that. Did you know this past weekend, July 4, the holiday weekend? It was 10 years ago on July 3, that Microsoft quietly announced the end of life of Small Business Server 2012. And I know this because I was on vacation and Seward, Alaska. And I looked down and I get this email and I'm like, oh, no, honey. Honey, we got we gotta we gotta cancel the vacation. We can't eat out. Oh, no. So well, Hey, Alex. Good luck with the move and we'll catch you next quarter.

Awesome. All right. Thank you.