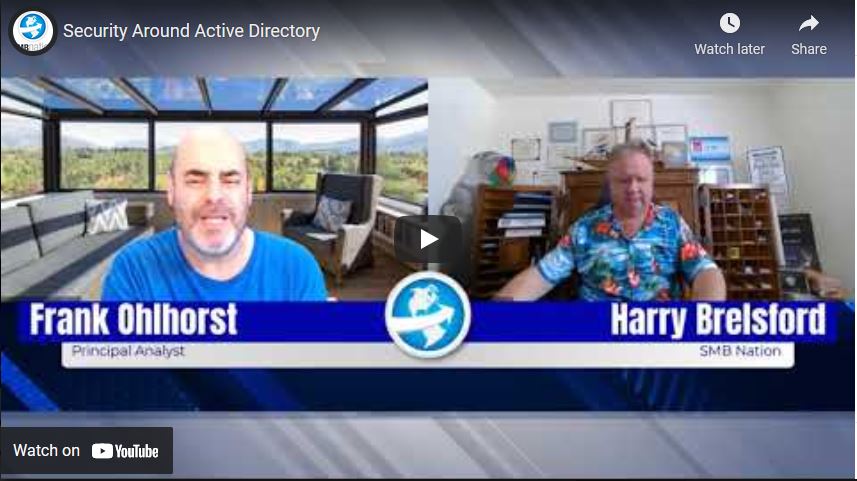 Active Directory is one of the primary focuses of cyber attackers as it contains the information attackers need to expand their access, establish connection, and more.  By taking a deeper look into your Active Directory exposures, organizations can improve their security and data before the attacker tries to gain access to administrator accounts, credentials, records, data and more.

We meet with Frank who shares with us security around Active Directory.

Hey SMB Nation Harry here in the heart of the heat of the Texas summer Frank the the heat finally arrived as coldest  summer in 14 years most terrain until last weekend. How are you doing?

I'm doing good you know we've got a the beginning of a heatwave here in New York as well. So you know summers back I guess yep

dirty little secret I was you know, like to chitchat with you, but I I'm biking a lot less a it's really hot be I've gotten back into my swimming and it's an outdoor pool at the YMCA. And there's no better feeling when the heat index is above 100 to be in an outdoor pool in the water. Man, I got to tell you. Oh, hey, you just dropped an article today basically, on AD assessor. So talk to me, you dropped it any week? What's going on? What's AD assessor?

Yeah, I'm looking at your piece right here. Very interesting. It's neither here nor there, but I have to ask the question, do they have a partner program? Would MSPs receive a little love?

Yeah, although I don't talk about it over at a week. AttiVo is partner friendly. They work with MSPs Okay, you know, they make a lot of other tools beyond ad assessor all aimed at the cybersecurity space. And you know, with a product like with a product like ad assessor, you know, an MSP could kind of offer that as a service or use it to kind of cover all of their own bases if they're managing ad for a customer.

Yeah, yeah. Cool. Well keep up the good work. And I appreciate you posting this up to what is sort of the de facto SMB Nation group on Facebook. Folks, click over to you know, you grew up with SBS if if you have an SBS bumper sticker All right. Gotta bounce. Thanks Frank.